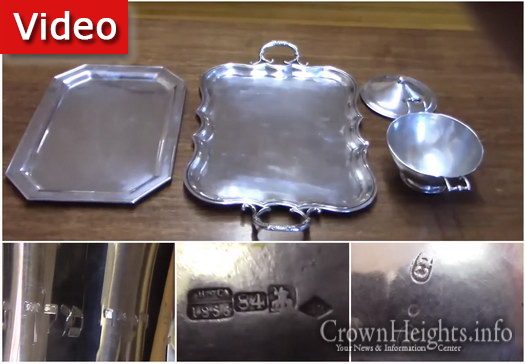 In Honor Of Pesach, the Pesach Ka’arot of our Rebbes

Watch as Curator and Librarian of the Agudas Chasidei Chabad Library, Rabbi Berel Levine, continues his tour of the Library. In this video, he showcases the Pesach Ka’arot of our Rebbes.

In honor of the coming Pesach, are presented here 2 Pesach Ka’arot of our Rebbe’s:

A) the pesach ka’arah of the Rebbe Rayyatz, Rabbi Yosef Yitzchak of Lubavitch. On the underside of the ka’are there is a hallmark, indicating that it was created in Russia in the year 1856, the period of the Rebbe Tzemach Tzedek. So there is reason to asume, that this Ka’are was used already by the prevyes Rebbes.

B) the pesach ka’arah of the Rebbe. On the underside of the ka’arah there is a hallmark, indicating that it was created in USA circa year 1950, Prior to Passover 1951, the Rebbe sent Rabbi Yaakov Haecht to purchase a ka’arah with eight corners, and from then on the Rebbe used it for the Seder ka’arah.

C) A gold cup for kiddush, which the Rebbe used for kiddush in the later years on pesach. This cup was given to the Rebbe by the chosid r’ Aharon Klein, on the 11th of Nissan 1962, and inscribed the cup “ימים על ימי מלך תוסיף”, a posuk in chapter 61 of the tehilim, the chapter that the Rebbe began to say that day, in which he turned 60 years old.

D) A broken vessel (especially broken), for pouring into it the wine when, when saying the 10 makos.