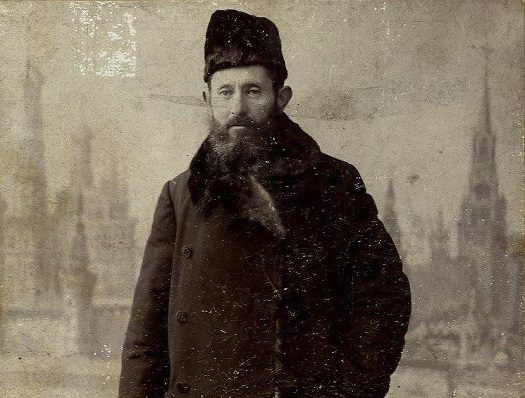 A new picture said to be of the Rebbe Rashab that surfaced Thursday morning has stirred up a lot of heated discussion concerning its authenticity.

A member of a WhatsApp group called “Interesting Gedolim Pics” posted the image shortly after 12:00am on Thursday, writing (lightly edited): “I present a rare discovery. An original unknown photograph of the [Rebbe] Rabbi Shalom DovBer Schneersohn (Rebbe Rashab) taken in Moscow, 1908.”

The person went on to note: “Only one photograph of the Rashab is known. It was photographed in the last year of his life, in 1920, for a passport before [a planned] trip to Turkey, when he was 59 years old.

“The following photograph was taken in 1908, as is printed on the reverse side of the cardboard upon which the photograph is affixed. In addition, inscribed in period script: “Rabbi Shalom DovBer Schneersohn, 1908.”

“In this photograph, the Rashab was photographed at the age of 47, and approximately 13 years divide the photograph before us and the known one taken towards the end of his life.”

The post immediately sparked a large uproar in the Chabad world with many arguing over whether they found the picture believable and reminiscent of the known photograph of the Rebbe Rashab. Various sources from the rebbeim about the Rebbe Rashab’s aversion to being photographed, details describing his physical appearance, and sources concerning his whereabouts in 1908 were cited in these discussions.

Many have pointed out that there was one other person known to have this name – a cousin of the Rebbe Rashab who served as a rebbe for a number of years in Retzitza (Rechytsa) and passed away in 1908, the year the photo is dated to. But this suggestion raises a host of questions as well.

CrownHeights.info can report that when the original poster was contacted and asked about how he had obtained the photograph and what its provenance was, he replied that he had not anticipated the large tumult his post would elicit, and that all he could say on the subject was that the photo was in the possession of Winner’s Auctions in Israel who intended to sell the photo at a later point, and who would presumably be able to share what additional information was known about the origins of the photo.

Rabbi Berel Levine, Director of the Agudas Chasidei Chabad Library and an expert on Chabad history, was quoted on a Hebrew Chabad website as saying:

“There is a great resemblance. There’s no doubt using computer software we can determine with certainty whether the two images are of the same person.

“The Rebbe [Rashab] was in Moscow in 1908 only once, during the month of Iyar (this is according to his passport, and according to his letters). He traveled there for two weeks to raise funds for Tomchei Temimim, and perhaps the picture was for one of the wealthy donors.

“However in Iyar (May) there would seemingly not be the need for a coat like that. At any rate, it is necessary to give this to experts to make a determination using computer software.”