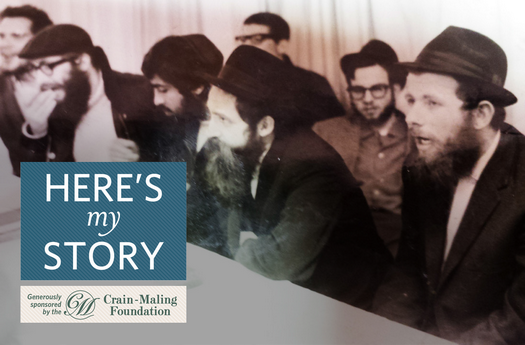 I began my journey toward Torah observance in Melbourne, Australia, where I connected with Chabad chasidim. After a time they felt that, in order for me to progress on my spiritual path, I needed to enroll in a yeshivah somewhere abroad – perhaps in the U.S. or England or Israel.

I wrote about this matter to the Rebbe, who responded that I must go to Israel – he was quite definite that it should be Israel and not anywhere else. So, of course, I did as he advised.

In 1962 I went to Israel, where I studied for over a year at Yeshivah Tomchei Temimim in Kfar Chabad, and then married my wife Devorah and settled in Bnei Brak. After a time, the Rebbe recommended that I base my livelihood on my knowledge of English. This was later realized when I become the leader of an English-speaking program for those who came from a similar background as mine and had little previous education in Judaism.

After the Six Day War, there was a tremendous awakening of Jews in English-speaking countries who wanted to come to Israel, reconnect with Judaism and study Torah in yeshivah. But the teachers at Tomchei Temimim did not know how to handle them because they had no experience with this type of student who lacked basic Jewish knowledge.

In the fall of 1967, Rabbi Nachum Trebnik, the head of Tomchei Temimim, went to spend the High Holidays in New York and reported his exchange with the Rebbe back to the yeshivah administration. The Rebbe advised that a special program be set up for these young men and to appoint an English-speaker with some yeshivah experience to look after them. The Rebbe suggested that I be the one to head this program.

Rabbi Trebnik was very meticulous to repeat exactly what the Rebbe had said to him, and soon after, I was instructed to undertake this mission.

It took a while to set up the program, but then the students, full of desire for Torah and spirituality, started coming. These fellows were not your standard yeshivah students. They came sporting long hair – pony tails even – and wearing jeans and tee-shirts, not exactly in keeping with the yeshivah dress code. But nobody said, “Listen, just clear out of here,” because everybody knew that the Rebbe wanted this program.

After running the program for a while, I came to New York in 1969 to discuss my progress with the Rebbe.

Prominent in my mind was the concern that, prior to doing this work, I was able to pray at length with deep concentration, but now my responsibilities at the yeshivah were getting in the way of my own spiritual growth.

The Rebbe’s response was that my current mission – to bring my students closer to Torah – should be my first concern. He then gave me an example from the Talmud which relates the story of Rabbi Shmuel bar Shilat, described as the most outstanding of teachers.

One day, the great sage Rav found Rabbi Shmuel bar Shilat in his garden and, surprised to see him out of the classroom, asked him: “Have you abandoned your obligation and neglected your students?”

Rabbi Shmuel bar Shilat answered, “It has been thirteen years that I have not seen my garden, and even now, as I stand here, I am thinking about them.”

As the Rebbe was telling me this story, the thought crossed my mind, “This is the end of me. From now on, it’s only the students that matter – I am not important anymore.”

Just then, the Rebbe suddenly stopped speaking and looked up at the ceiling. This in itself was surprising because very rarely would the Rebbe be diverted from the subject at hand. Yet, he paused in the middle, and after a moment, addressed my thoughts head on. He said, “But we still need to find a solution,” meaning, “you can’t leave feeling like that.”

And then the Rebbe proceeded to talk about praying at length. He said that Rabbi Yochanan is quoted in the Talmud as saying, “If only a person would pray the whole day.” The Rebbe stressed that Rabbi Yochanan merely said “if only,” but he did not give a directive that one should pray the whole day. Rather, he was trying to express the importance of prayer and urging people to pray with greater intention.

The Rebbe then suggested that I recite several passages of the prayer book slowly, with great intensity. The rest of the prayers could be recited at a more regular pace. But I should bend the page where I stopped my intense prayer so that, after several days of reciting this passage with deep concentration, I could continue on to the next one. In this manner, over a period of time, I would have recited the entire prayer service with deep intention.

“Even that might be a bit hard on some days when you have to get to the yeshivah in order to teach,” the Rebbe added, “because you must also prepare for your classes. A teacher giving a class must prepare and he must prepare very, very well, so that he has complete mastery of the material he is going to convey to the students.”

The Rebbe went on to remind me that when my prayer service suffers due to my teaching obligations, I still had Shabbat to make up for it, adding that “if one prays properly on Shabbat that illuminates the whole week.”

That is what the Rebbe told me, and his advice became the basis of my whole teaching approach.

But after a couple years of teaching, I began to feel that the administrators at Tomchei Temimim were none too happy with the non-conformist students in my program. So I went to see the Rebbe in order to discuss setting up a separate institution for them, apart from the yeshivah.

But the Rebbe did not agree. He urged me not to move out of Tomchei Temimim. He said that we should gear our program towards young returnees to Judaism who were ready to accept the demanding study schedule of a yeshivah, not necessarily those who were at first grade level, so to speak. He wanted us to offer a real yeshivah experience to these students. And he instructed me, “Ich vil ir zolt hodeven chasidishe bochurim un chasidishe yungerleit – I want you to nurture them to become chasidic young men.”

Of course, the program remained at Tomchei Temimim with separate classes in English and separate prayer services. As the Rebbe predicted, this allowed my students to enjoy the authentic yeshivah experience, while benefiting from their own course of study and circle of friends. Over the years, hundreds of students passed through the program, most of whom went on to establish chasidic homes and some of whom went on to serve out in the world as Chabad emissaries, fulfilling the Rebbe’s vision.

For forty-six years, Rabbi Shneur Zalman Gafne headed the Ohr Temimim yeshivah in Kfar Chabad, Israel, and also served as a spiritual leader of the Chabad community in Bnei Brak. Presently, he resides with his family in Tzfat, where he was interviewed in November of 2018.