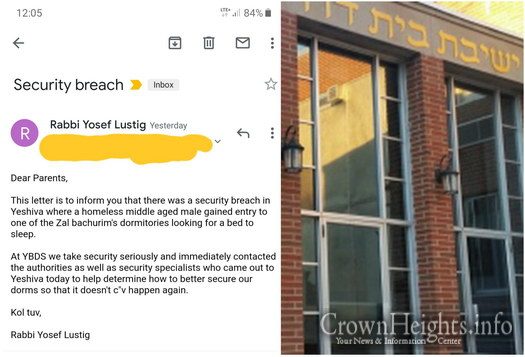 An email was sent to parents of the Yeshiva Gedolah of Yeshivas Bais Dovid Shlomo New Haven advising them of a security breach that occurred in one of their dorms this week. A homeless man was found inside the zal dorm, and was immediately removed.

A security breach at the Yeshivas Bais Dovid Shlomo New Haven Zal was reported earlier this week in an email sent by school administration to the parents.

The incident allegedly occurred late at night as the bochurim slept. A source told CrownHeights.info that a bochur woke up, noticed the man and confronted him. The man, who was later identified as being a local homeless vagrant, then used the bathroom, before locking himself in an unoccupied room.

The Yeshiva’s Hanholah was notified, and they quickly removed the man from the premises.

In an emailed statement to the parents, the school stated, “At YBDS we take security seriously and immediately contacted the authorities as well as security specialists who came out to Yeshiva today to help determine how to better secure our dorms so that it doesn’t c”v happen again. ”

A source told CrownHeights.info that the homeless man was known to the community, and has previously attempted unsuccessfully to gain entry to school buildings.