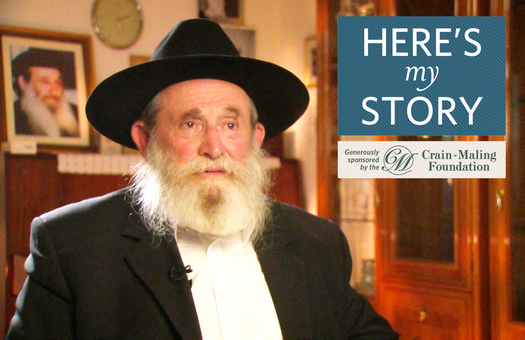 Right after their wedding, my parents – Rabbi Moshe and Chasha Vishedsky – were sent by the Previous Rebbe to the city of Gorky (today Nizhny-Novgorod) in Russia, to strengthen Judaism there. This was in the 1930s, when religious freedoms were severely curtailed and the Soviet regime persecuted those who dared to violate their decrees.

However, the Previous Rebbe refused to bow to the regime. He had been imprisoned for his activities, and after he was expelled from the country, he settled in Latvia, from where he directed his activists in Russia. The activists – my father among them – worked under harsh conditions to sustain Jewish life wherever possible; they gave Torah classes, established Jewish schools, supplied kosher meat, maintained mikvehs, etc. All their work had to be done undercover, as the Soviet secret service kept a watchful eye, and they were constantly in danger.

After the Second World War, my parents moved to Czernowitz (today Chernivtsi, Ukraine), where my father continued his activist work, along with Rabbi Mendel Futerfas. But a few years later, as a result of their involvement with a group of young Jews who tried to escape Russia via the border with Romania, they were both arrested and taken to prison.

My father was stopped by NKVD agents as he walked to shul, and I vividly remember them bringing him back home under guard, while they proceeded to search the house. I was just a child at the time and I watched all this gripped by terrible horror. At a certain point my father threw a rolled-up piece of paper to my older sister so it should not be found, but one of the agents noticed and tried to intervene. Despite the volatility of the situation, my sister showed incredible resourcefulness – she quickly stuffed the paper in her mouth and swallowed it before anyone found out what was written on it.

Much later, when he returned from prison, my father revealed to us that the paper was a petition for a blessing that he had written for the Previous Rebbe, as is customary before Rosh Hashanah. Had the NKVD been able to seize it, they would have had clear documentation of my father’s connection to the Rebbe which would have landed him in even greater trouble. To illustrate the great danger that an association with the Rebbe posed, I will mention that, many years later, I obtained my father’s NKVD file which among his “sins” listed “affiliation with the Schneersohn movement.”

At first my father was moved from one prison to another, and each time that we somehow heard of his whereabouts, my mother hurried to send him food parcels, knowing fully that he would not touch any of the non-kosher food that was given to him. Most of the time he subsisted on dry bread, and on Passover he couldn’t even eat that. Ultimately, he was sentenced to five years of hard labor, and in the labor camp, he managed to keep kosher too, despite the great self-sacrifice this involved; he even managed to avoid working on Shabbat by bribing the overseer with cigarettes that we sent him. He also refused to shave his beard, so the guards grabbed him and shaved it off by force.

Finally, at the end of 1955, my father was released and he returned to Czernowitz, where he resumed his Jewish activities. By this time, the Previous Rebbe had passed away, and my father managed to communicate with the new Rebbe by sending smuggled and coded notes addressed to “Grandfather” to people in Israel, who then forwarded them to New York. After some years, he used this method to ask the Rebbe if it was the right thing for him to try to leave the Soviet Union for Israel with just his wife and two of the youngest children, and then subsequently send for the older children under the terms of family unification. My father thought that this plan had a chance of succeeding since entire families were rarely allowed to leave.

The Rebbe responded that my father should request an exit permit for the whole family together. He signed the letter, “Dasvedanya, Dyedushka – See you soon, Grandfather.” We immediately understood this to mean the Rebbe was telling us that the exit request for us all would be approved and that we would see him soon.

Indeed, that is what happened. When we applied, we received exit permits for the whole family! Truth be told, we weren’t really that shocked because, based on the Rebbe’s response, we were anticipating leaving.

On the third of December 1965, we arrived in Israel. My father immediately went to visit the Rebbe in New York, and the following year, my brother Michel and I were invited to be the Rebbe’s personal guests for the High Holidays and Sukkot. We received plane tickets, reserved seats near the Rebbe for prayers and farbrengens, and we even got aliyot to the Torah. These aliyot were a source of income for the shul in 770, as wealthy individuals would contribute to receive these honors, and the gabbai, Rabbi Yochanan Gordon, asked the Rebbe who will pay for our aliyot. The Rebbe replied, “I will!” We were even invited to dine with the Rebbe on Simchat Torah, which all goes to show the high regard that the Rebbe had for the families of those, like my father, who sacrificed so much to maintain Judaism in Russia.

As additional evidence of this, I would like to add the following story:

Rabbi Simcha Gorodetzky – who had loyally served for many years as the Rebbe’s emissary in Azerbaijan and the Crimea, and who had immigrated to Israel a year before we did – lived alone. His wife had passed away, and his son Mottel, who was married to my sister Dvonya, was unable to leave Tashkent; the family was trapped behind the Iron Curtain. This situation caused Rabbi Simcha great anguish, and at a certain point he got very sick and had to be hospitalized. We would visit him in the hospital and bring him food twice a day, and we saw how broken and depressed he was. But one day, we found him in high spirits. His eyes were open, and he was smiling. As we walked in, he exclaimed with great joy, “Di kinder kumen! – My children are coming!” We asked him how he knew this, and he answered, “The Rebbe wrote to me!”

It turned out that he had been writing letters to the Rebbe from the hospital, but not receiving a response. He was afraid of what this might mean, and so he had written again asking if perhaps he wasn’t worthy. And that day the letter finally came. In it, the Rebbe wished him a speedy and complete recovery, adding in his own handwriting, “I’m very surprised that you write that you’re unworthy … since your offspring and their family have received visas to leave. Could there be a better response than this?!”

Two months later, they arrived in Israel. And when Rabbi Simcha showed them the letter from the Rebbe, they were astonished. They produced their permits, which arrived ten days after the Rebbe said they had received visas. At that point in time the only people who knew the permits would be issued were officers of the Soviet immigration bureau and the Rebbe!

Rabbi Bentzion Vishedsky is the principal of Cheder Yiddish in Kfar Chabad, Israel. He was interviewed in his home in August of 2010.