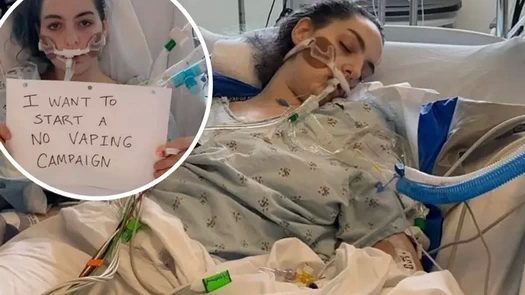 A Chabad teenager who nearly lost her life, claiming vaping ruined her lungs, has started a campaign to warn people of the dangers of e-cigarettes – all while she lay in her hospital bed.

Simah Herman, 18, shared the images of her holding up hand written signs on Instagram, as the Californian teen was on a ventilator after suffering from lung failure.

Another image shows her unconscious in bed after being placed into a medically induced coma.

Herman said her symptoms first started two years ago when she started feeling sick all the time.

Two weeks ago though, she began to have trouble breathing. Medics put her on a ventilator and her lungs failed in 48 hours.

Her post reads: “This is all because of vaping.

“Vaping is advertised as ‘a healthier alternative to smoking’ which is false.

“Whether it’s nicotine or weed vaping can be fatal. I was lucky. The doctors didn’t think I was going to make it, but with prayers from family and friends I pulled through after almost a week on a ventilator.”

Her condition deteriorated quickly after she was admitted to hospital.

She went on: “It took less than 48 hours for me to be put in a drug induced coma and a tube put down my throat because I could no longer breathe on my own. The dangers of vaping are real and this can happen to you. Please don’t let it.

“I didn’t end up having pneumonia. The signs of respiratory failure from vaping make it look like pneumonia, if they didn’t find that first I would have died.”