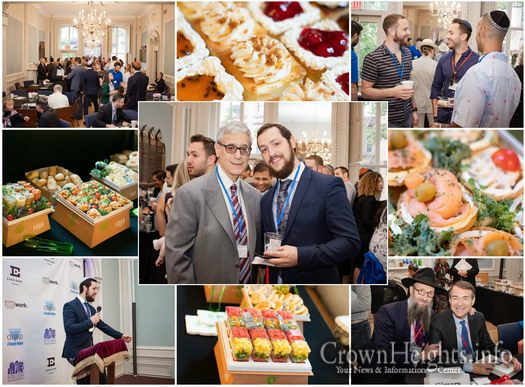 Founded by Rabbi Eliyahu and Shaindy Raskin, shluchim of Chabad of Brooklyn Law School and Brooklyn Heights Young Jewish Professionals, NBS works to transform the lives of their members by opening doors to a world-class community of business leaders, innovators and forward thinkers, who mentor and teach through unparalleled educational experiences and forums. NBS exists to attract, develop, and create a community for people who are willing to lead, innovate, and give back to the Jewish and global communities. They help their members continue a remarkable tradition of spearheading change – and provide bold ideas and resources to shape their future.

Brooklyn Heights YJP is the premier organization for professionals seeking trailblazing practices, big ideas, bold vision and a world-class network of trusted peers. They create a platform where industry peers can learn from each other and connect with mentors, and where meaningful relationships and connections can be forged.

On Thursday, August 1st NBS hosted a breakfast catered by Soho Platters and sponsored by Evan Duby from Compass. There were 100 people in attendance, all who came out at 7:30am to network and hear Scott A. Shay, the founder and executive director of Signature Bank, speak about his new book In Good Faith, and his myriad career experiences. Presently, Signature Bank ranks among the top 40 largest U. S. commercial banks by deposits, beginning at $43 million in assets and equity at its inception and growing organically to $47 billion in assets.

Since its IPO in 2004, Signature is among the top-performing U. S. banks, based on stock market performance and total return. Signature Bank was ranked Best Bank in America for 2015 by Forbes.

The morning began with breakfast and Networking, followed by an opening talk by Rabbi Eliyahu Raskin. The crowd took a break to collectively choose and contribute to their favorite charity. Then Mrs. Shaindy Raskin spoke about the state of religion in the world today, followed by an introduction to Mr. Shay.

After Scott Shay’s talk, there was a Q & A followed by a signing of his new book, “In Good Faith”.

Everyone wants to do business with individuals they know and trust: we are here to make those relationships happen. NBS is committed to bringing the top industry leaders to speak to our group. We meet every eight weeks for a gourmet breakfast, mingling and networking, and roundtable lecture followed by Q & A.