« Consumers Could Get up to $20,000 Apiece in Equifax Settlement
Israeli Embassy in Finland Attacked for 15th Time » 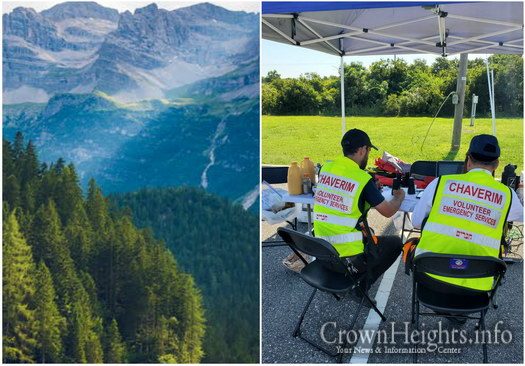 A major search has been launched for a 15 year old hiker who went missing while on a hike in Vermont. The boy was reportedly on a hike yesterday in Vermont, when he went missing.

A 15 year old boy went missing this morning while on a hike in Vermont. He was last seen at around 9:00pm, Wednesday night.

The boy was with a Lubavitcher camp, which was on a hiking trip in Vermont according to the YeshivasWorldNews.

Rockland and KJ Chaverim search and rescue teams were dispatched this morning to search for the missing boy.

The boy got lost near Killington, a town in the Green Mountains of central Vermont, around 4 hours from Monsey, NY.

UPDATE 11:38am: Chaverim of Rockland received the call in regards to the missing only this morning, and has sent a group of 25 trained volunteers along with their Command Vehicle.

UPDATE 12:30pm: The boy missing, is reported to be a Chabad Bochur from Montreal, and was spending the summer at a camp based in Vermont.

Dear parents,
I want to let everyone know that our foremost responsibility is every campers physical and spiritual safety and well being. I am writing this letter to inform everyone that one of our teenage campers was separated from the group on an overnight hike about an hour away from camp. I want everyone to know that part of preparing for any activity involves emergency preparation and training which this group participated in before starting this overnight hike. As soon as the report came in that a camper had gotten separated from the group the authorities were notified. A full-blown search and rescue operation is underway led by the Vermont State police and in coordination with many local first-responder agencies. Chaverim branches in New York have also been mobilized to help out. I’ve been in direct contact with the lieutenant leading the rescue operation and he is very confident that the camper will be found. We want to reassure you at this time that all the other campers are safe. We ask the entire pioneers family to daven for Shmuel ben Chasha. At this time our entire camp staff is busy maintaining the camp program. We will keep you apprised of the situation going forward.
Best,
Michoel Nagel

UPDATE 5:26pm: Reports that the boy has been found are untrue, the missing boy is in contact with his family VIA cell phone, he is still in the woods, and not yet found.

UPDATE 6:03pm: The boy met another hiker on the trail and borrowed his cell to call his mother. BH, he has been located in good health.

« Consumers Could Get up to $20,000 Apiece in Equifax Settlement
Israeli Embassy in Finland Attacked for 15th Time »