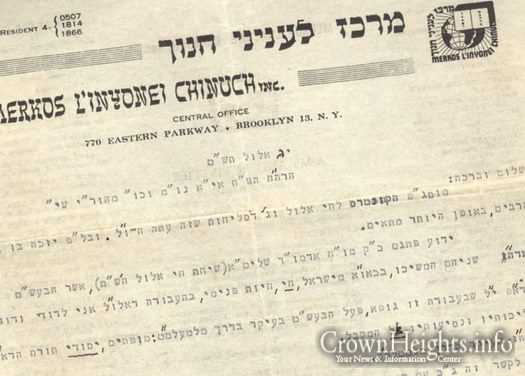 A rare and fascinating letter from the Rebbe is up for auction in Israel. The letter, part typed, part handwritten, is addressed to Rabbi Yeshayah HaLevi Horowitz, and is written on HaMerkaz L’Inyanei Chinuch stationery.

A letter sent from the Rebbe to Rabbi Yeshayah HaLevi Horowitz dated the 13th of Elul 1949, is up for auction at an Israeli Auction house.

The letter, which is part typed and part hand written, covers a wide range of topics, including the leadership difference between the Baal Shem Tov and the Alter Rebbe, a selection of halachic and theoretical issues, such as whether Aristotle retracted his heretical perspective, and naming a child after his father while the father is still alive.

The letter is written on the letterhead of HaMerkaz L’Inyanei Chinuch.