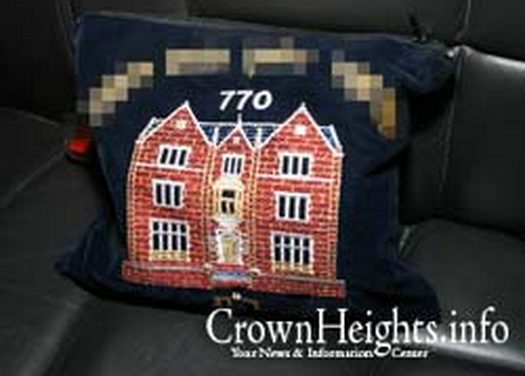 A reader shares his story of Hashgacha Pratis, and how his Tefillin, stolen months ago, found their way home through a tire repair shop, and a singer:

On Friday afternoon during Chanukah of this year, I arrived at Costco in Brooklyn. I locked my car doors and went shopping.

When I returned to my car, I noticed that car my lights were blinking weirdly, but didn’t think much of it, so I loaded my car and left.

When I got home I unloaded the car with my sons then went to get my talis bag and my brief case. To my shock they were gone. That’s when I realized what the blinking lights meant. I’d been robbed.

I jumped back into my car and rushed back to Costco, hoping to find my things. I was praying that my tefillin and talis had been of no use to the thief and that he’d thrown them in the garbage.

I parked in the lot and looked through the garbage cans, but to no avail. I could not find them.

By now it was 3:45pm and I had no choice but to head back home because shabbos was starting soon, and I still had to light Chanukah candles.

When I got home I lit Chanukah candles and tried not to let the loss of my tefillin ruin shabbos for me.

After Shabbos I drove around the area for about 2 hours but unfortunately my things were gone. I ordered another set of tefillin, bought another talis and tried to move on.

Fast forward to this  Friday morning two weeks ago…

My house phone rang at 1:00am Friday morning. My wife jumped up to get it, but didn’t recognize the number so she let it go to the answering machine. The person hung up.

A few minutes later the phone rang again. This time she answered it. Half waking up, I hear her saying “yes, yes, hold on”. She gave me the phone and said, “Someones found your tefillin!” Now I was fully awake.

He told me, his name was Issac Honig.

He said, “I’m at a 24 hour tire repair, and the guy that works here told me to come to his truck. He showed me a bag with talis and tefillin, and told me he found it at Home Depot about 3 months ago. He was told this is important by Jews.”

I asked him please take it and that I’d meet that day. He gave me his contact information and said I should come to him Friday because he was going to Eretz Yisroel on Sunday.

I did not get much sleep after that.

When I got to work I asked a coworker, who lives in the same area as Mr. Honig, if he knew him. He told me that he is a singer and a really great guy.

Later that afternoon I met him at his house and we gave each other a big hug. Then I asked him how everything had happened.

He said he was coming back from Lakewood, from singing at a chasuna, and he got a flat tire on the BQE. He called Chavierim and they changed his tire to a temporary one. He asked them if they knew the closest tire place that would be open so late and they told him there was one on 39th St between 2nd and 3rd Ave.

Mr. Honig said on the way there he asked himself  “What have I done wrong to get this flat tire?”

When he got there he realized he was sent there to get me back my tefllin.

When I asked him how he found me, he pulled out a check of mine from the talis bag, and told me he had his daughter google my name.

This shows me, the greatness of the Eibishter and the way He plans everything in the world.

I said to Issac that there’s a reason we were meant to meet, maybe not just because of my tefillin .

As I was leaving, his wife mentioned that she asks anyone that comes to the house, to give a brocha for for a personal matter, and hatzlcoh in all their inyonim. I gave her a brocha, and Issac and I wished each other gut shabbos.

A few hours later I was talking my brother. I asked him what he thought of why I was meant to meet Isaac Honig. He answered me, “It’s clear you were meant to suggest to him to go to the Rebbe for help.”

That’s exactly what I did.

I sent him a whatsapp and told him since that night was Gimmel Tamuz, and he should go to the Rebbe and ask for help.

He said he was actually thinking about going, he just never had a chance. But he said he had a kvitil he’d send me via whatsapp. I told it I will iy”h be going there Motzei shabbos, and I will give it in. He thanked me and BH I gave his PA”N in when I went.

I was talking to a Satmer Chosid that works by me, and he told me that he has been to this tire place a few times after my talis and tefillin were stolen, and no one had ever approached him.

I truly believe that everything in this world is Hashgacha Protiyus.