« Gimmel Tammuz Awareness Campaign Across Jewish Media
The Lubavitcher Rebbe, A Master of the Spirit » 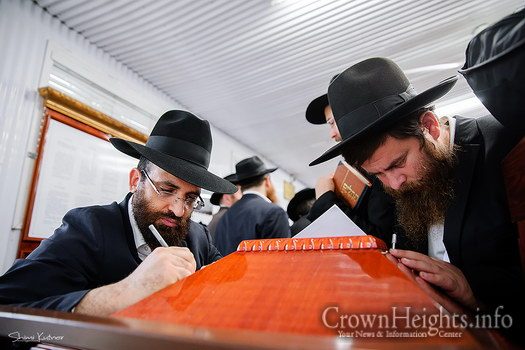 The following is from Rabbi Mendel Itzinger, on the origin and meaning of a Pan, or Pidyon Nefesh that is written to a Rebbe. Many thousands will be writing a pan as they visit the Rebbe’s Ohel in Queens over this coming weekend for Gimmel Tammuz:

What is a Pan?

Generally speaking, a Pan is not the letter one writes to the Rebbe.

A Pan is money that one gives to the Rebbe for Tzedoka.

Through the money, the Rebbe is able to help ‘redeem’ the Neshoma of a person, (i.e. transfer any negativity attached to the Nefesh onto the Tzedoka money), and cure him from physical and spiritual challenges.

On His way to visit the Tzadik Reb Boruch of Mezibuz, the Alter Rebbe stopped off for Shabbos in the town of Breslov. And spent close to two days together with Reb Nachmon of Breslov, a great-grandson of the Ba’al Shem Tov.

One of the many stories told in Breslov about that elevated Shabbos, is that during one of their discussions, Reb Nachmon asked the Alter Rebbe if it is true that he has 80,000 Chassidim. (A massive amount in the days when communication was so rare, and people lived in town of a few hundred to a few thousand houses),

The Alter Rebbe acknowledged that it is true; he really did have 80,000 Chassidim, but he explained that there is a reason for that, and it is not exactly as Reb Nachmon thinks.

Many of my Chassdim are teachers, the Alter Rebbe explained. Those teachers serve as a role model and guide to the families of the students they teach, and once a year they collect money from those parents to give to me as a Pidyon.

Through those funds they become connected to me.

The note attached [Pan] is the request for what the Pidyon money should help.

Many Tzadikim over the years had varying different ‘Kabolos’ in how to make a Pidyon, written in Sifrei Kabolla, and passed down from one Tzadik to the next.

In the Kabola of our Rabeim, the letter that we attach to the funds is a part of, or strongly connected to the Pan itself.

When Reb Michoel Dvorkin turned 80 years old he went into the Yechidus by the Frierdike Rebbe.

Reaching out slightly, the Rebbe took his Pan, opened the paper, and discovered that the paper was blank.

“Reb Michoel, what is this”? The Rebbe asked.

“The Rebbe knows me better than I know myself, Reb Michoel replied, so I request that the Rebbe write my Pan for me”.

Immediately, the Rebbe picked up his Pen, and began to write the Nussach of the Pan “אנא לעורר רחמים רבים” (If memory serves me correctly the Rebbe asked him what his mother’s name is), wrote a few lines, put down the pen, picked up the pan that he had just written and read it.

I’ll repeat that: The Rebbe read the Pan that the Rebbe himself had just written!

How to ‘read’ a Pan was taught from Rebbe to Rebbe.

Though we need to be starting a new ‘Hachlota’ this week, however, because we will be writing a Pan in the next few days, let us postpone that until next week when we will IYH take on something new. And for now, let us prepare ourselves for writing a Pan properly (in addition to our Hachonos for Gimmel Tamuz).

How to write a Pan:

1. Go to Mikva (if for whatever reason you were unable to do so in the morning).

3. Make sure you have a blank (unlined) piece of paper and pen (so that the writing will be neat and respectable)

4. Picture the Rebbe’s holy image (See details about this in the Tziyur Penei Horav letter).

5. Write honestly and from your heart, in the Nusach of the Pan. Focus a few moments on the meaning of the words Pan on the top of the letter. With this the Rebbe will be redeeming your Neshoma from various ‘blockages’ that have attached themselves to it.

6. Conclude with your name and mothers name as well.

7. In one letter the Rebbe asked an individual to write in a positive manner – meaning not what is wrong, rather how you want things to be. (But I am not sure if is a הוראה לרבים).

« Gimmel Tammuz Awareness Campaign Across Jewish Media
The Lubavitcher Rebbe, A Master of the Spirit »