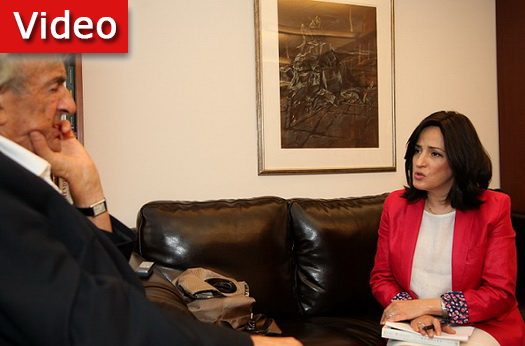 Elie Wiesel, one of the most passionate Jewish voices of our time, enjoyed an enduring correspondence and personal relationship with the Lubavitcher Rebbe. An avid student, a sought after teacher, survivor of Auschwitz and Buchenwald, Wiesel is the author of numerous related books, among them the bestselling Night, the first in a trilogy about his life in the concentration camps. Recipient of many literary awards and honorary degrees, Mr. Wiesel, a professor at Boston University, spoke with Baila Olidort in may of 2013. In honor of the anniversary of Wiesel’s passing, we brought this out of the archives.

BAILA OLIDORT: You were an enthusiastic student from a young age. Did you look for moral character in your teachers?

ELIE WIESEL: Absolutely. I would not want one who uses knowledge against the moral dimension of life as a teacher. I have lobbied around the world pleading for compulsory courses on ethics in every school—medicine, architecture, commerce. What are we doing if not that?

In your memoirs you write about the Torah study of your childhood in Sighet, and then how you continued to study after the war. What do you continue to study today?

I remain with gemara—Bavli and Yerushalmi, and all of the Chasidic masters.

You describe your relationships with several teachers who clearly held a very significant place in your life. And today you are a teacher. Do you have a similar relationship with your students as your teachers had with you?

Do you think this kind of intense relationship between student and teacher is intrinsically Jewish?

Well, the Greeks had it too. Socrates and Plato were after all very, very close. But ours is more so.

Tell me about the mystery of the relationship between the Rebbe and yourself.

That is too personal.

But, when the Rebbe was alone with anyone, it was an opening. He opened doors for his visitor, or his student or Chasid—secret doors that we all have. It wasn’t a break-in. It was just an invitation. And that was really the greatness of the Rebbe. I think the Rebbe had a great talent for that—one of the greatest and the best that Judaism has ever seen.

Would you say that the Chasid and the student are the same?

A Chasid comes not only to learn from the Rebbe, but more than than that: to live. Meetings, farbrengens with the Rebbe—they become a chapter in life. The interesting part is that in ancient times, the teacher chose the student. In Chasidic times, it was the Chasid who chose the Rebbe. And the moment the Chasid chose the Rebbe, the Rebbe had no right to say no.

Yes, and I began each meeting with the Rebbe telling him that.

What compelled you to come to the Rebbe in the first place?

And once I met the Rebbe, it was for always.

What did you take away with you from the farbrengens?

That is personal. But, I once came to a farbrengen, I think it was in honor of the Rebbe’s 70th birthday, and there was a big book [where guests wrote inscriptions] and I wrote, Ashrei hador sheAdmor manhigo. “Fortunate is the generation that has the Rebbe as its leader.”

The Rebbe created a bond, first of all between Chasid and Chasid. That was true of every Rebbe back to the Ba’al Shem Tov, that when a Chasid came to the farbrengen, it wasn’t only about the bond with the Rebbe; emunat tzadikim [faith in the tzaddik] is one thing. But dibbuk chaverim [bonds between friends) is something else. And the Rebbe achieved that.

After the Holocaust, Vizhnitz, and Chasidic life more generally were transplanted from Europe to Israel and to America. Was anything lost in the process?

Yes, the authenticity. What we managed to do was to save Vizhnitz by transferring the geography. Vizhnitz is there, but not really [the way it was] —everything is diminished. The world is diminished. Our ancient teachers say we are farther away from Sinai.

Many young Jews feel that today there’s nothing stopping us from integrating and fully assimilating; that it’s time to let go of the past and move on. How do you feel about that?

I never thought that way. We do hold on, and that is a good thing. I would not be who I am if not for my link, my fiery link to my past, to my childhood, to Israel. I tried to pass it on to my son, my grandson, and even to my students and my readers.

What do you tell a young Jewish generation about their indebtedness to history? Six million Jews died al kiddush haShem, to sanctify G-d’s name. Therefore what?

How do you imagine we can make up for the loss?

We cannot compensate for what we lost. It is mathematically impossible. The numbers are not numbers, they are human beings. Can I recreate what I lost in Sighet? And yet there is movement, there is a will, there are creative ideas.

You dedicated your life to raising awareness about the Holocaust, about the evil that human beings are capable of. And yet anti-Semitism continues. Genocide continues.

A few years ago I was invited to address the General Assembly at the UN. I gave my address the title, “Will the World Ever Learn?” and I came home very saddened, because it hadn’t. And yet we try to teach the world. The Jewish people tried as much as possible to bear witness. What else can one do?

In general there is an upsurge of anti-Semitism all over the world. The intellectuals are becoming more and more extreme in their condemnation of Israel.

Isn’t that demoralizing for you?

It is sad, but not demoralizing. I would never allow them that victory.

No matter what, I won’t give up. The principle of teaching is a major component in the survival of our own people.

What did you walk away with from your encounters with the Rebbe?

Everything was so personal. Of course we spoke about things that were not. He read every one of my books in French. He was a very good reader. Occasionally we had disagreements.

In your memoirs, you share some of the conversations you had with the Rebbe about G-d, and some of these letters were published. It seems to me that ultimately, there was not much of a disagreement between the two of you on that.

Oh, but there was. The Rebbe said we cannot understand. We are not supposed to understand.

I want to understand.

And have you over the years come closer to understanding?

What then propels the quest?

I define myself by my quest, not by what I find.

You have mentioned that the Rebbe often asked you about your plans to marry.

Oh, yes. The greatest bouquet of flowers I ever received was from the Rebbe for my wedding. He was nudging me to get married. I have letters—one letter in which we speak about Jewish theology—seven, eight pages about theology. At the end, [of the letter] he said, “And by the way, when are you getting married?” As if the two had something in common.

What did the Rebbe want from you?

I cannot tell you. It’s between him and me.

What do you think the Rebbe wanted to see happen today?

I’m sure he felt that if the Jewish people knew what Jews should do for the G-d of Israel and for the people of Israel, Moshiach would come. That was his dream. To prepare the world for biyat haMashiach.

Do you think he was satisfied with his achievements?

No, but unjustly. He always felt he hadn’t done enough, and yet he had done more than anyone I know. He felt that somewhere, maybe somewhere in Nepal—he didn’t travel but he knew what was going on—there is somebody who needs something. Once you feel that, you cannot be happy. If there was one person who, let’s say, was hungry for yiddishkeit . . .