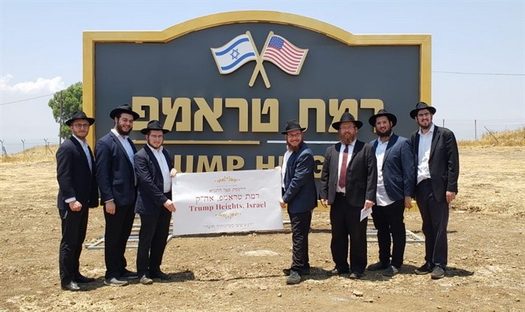 The Chabad-Lubavitch movement honored President Donald Trump with a special printing of the Hasidic movement’s foundational philosophical text, the Tanya.

In March, President Donald Trump signed an executive order, formally recognizing the Golan Heights as sovereign Israeli territory, ending more than half a century of US policy vis-à-vis the strategic plateau, which the US had previously regarded as occupied Syrian territory.

Last month, the Israeli government responded to President Trump’s decision by naming a soon-to-be-built town in the Golan Heights after the president – Ramat Trump (Trump Heights).

Now, the Chabad-Lubavitch movement is honoring President Trump with a special printing of its 18th century book of Hasidic philosophy, the Tanya.

One special, leather-bound copy of the Ramat Trump printing of the Tanya will be presented to American Ambassador to Israel David Friedman, in appreciation of President Trump’s decision to recognize the Golan. The remaining copies will be distributed, free of charge, to residents of the Golan Heights.

In a statement Monday, the Chabad movement explained the decision to print the special ‘Trump Heights’ edition of the Tanya.

“In 1978 the Lubavitcher Rebbe initiated a campaign to print the Tanya – the seminal work of Chabad Philosophy – in every corner of the globe. The founder of Chassidus, the Ba’al Shem Tov, taught that when the ‘wellsprings of Chassidic teaching’ reach the farthermost areas, Moshiach [the Messiah] will be ready to come.”

“The Rebbe explained that the printing of Tanya in a place has a tremendous impact on that place, bringing increased spiritual awareness to the people living there. Since the 1970s Chabad shluchim [emissaries] and individuals have taken up the Rebbe’s call and Tanyas have been printed in thousands of locations, some as remote as Trinidad and recently even in the Arab state of Qatar.”