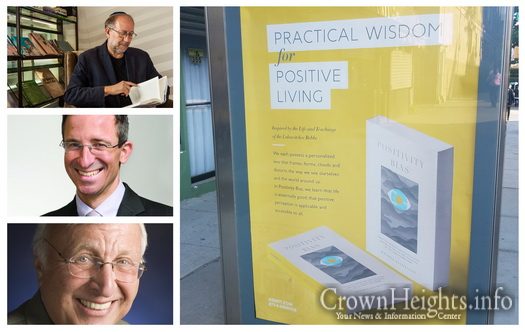 “Positivity Bias,” the newly-released book that has been making waves around the world. Readers are raving about its easy-to-read style and its life-changing perspective on how to approach each day. The book, which was inspired by the example and teachings of the Rebbe, teaches that positive perception is applicable and accessible to all.

Professor Tal Ben-Shahar, who authored many books on positive psychology, and also lectured at Harvard, creating the most popular course in Harvard’s history on this topic. After reading the new book, Ben-Shahar wrote, “Growing up, my parents and teachers would tell me stories about the Lubavitcher Rebbe. These stories impacted me in a profound way, and still affect the way I see—and experience—life.”

“In ‘Positivity Bias,’ Rabbi Mendel Kalmenson beautifully weaves some of the stories I grew up on — as well as many others — using rigorous research and uncommon wisdom to provide us with a life-changing and life-enhancing perspective.”

The popularity of this book, which was produced by Chabad.org and timed for the 25th anniversary of Gimmel Tammuz, is a concrete testimony to the continued and increased relevance of the Rebbe and his teachings to people of all walks of life.

“Through his new book, ‘Positivity Bias’, Rabbi Kalmenson brings a vital and energizing message to the Jewish world — a message of hope, positivity and optimism, which is deeply rooted in faith in G‑d and faith in the Jewish future,” wrote Chief Rabbi of South Africa Rabbi Dr. Warren Goldstein.

Elliot R. Wolfson is the Chair of Jewish Studies at the University of California, Santa Barbara. He says that the book’s release couldn’t have been more timely. “In a time of divisiveness and acrimony dominating our socio-political and individual realms, it is an opportune time for Mendel Kalmenson’s ‘Positivity Bias: Practical Wisdom Positive Living to enter into the world,’” he wrote. “As the title suggests, Kalmenson, following the teaching of the Rebbe, accepts that there is no way for a person to be totally objective and to avoid a personal bias. The bias that he promulgates is to inculcate a positive orientation in the life. As the author states, the basic premise of the book is that living a life of positivity is a matter of choice and not circumstance, deriving from perspective and not personality. Kalmenson elicits from the treasure-trove of the Rebbe’s teaching a philosophy of life that is more necessary now than ever before in history in a time of increased insensitivity to the other and the amplification of negativity and derision. Transmitting one of the major contributions of the Rebbe, Kalmenson’s book offers a guide for the reader to change the way he or she looks at the world so that the world he or she is looking out will change. Effectuating such a change in perspective is nothing short of realizing the potential of the Rebbe’s optimism and his boundless energy to bring humankind closer to the Messianic redemption.”

The new book has been so popular that an additional printing had to be commissioned just two weeks after its initial release in order to keep up with demand. Chabad.org partnered with Ezra Press, an imprint of Kehot Publication Society, which is the publishing arm of the Chabad-Lubavitch movement.

According to Yossi Klein Halevi, senior fellow at the Shalom Hartman Institute in Jerusalem, the book explains to the reader how the Rebbe transformed the Jewish world in the wake of the Holocaust. “In explaining the profound theology behind the Rebbe’s relentless optimism, this beautifully written and inspiring book helps us understand how the Rebbe, working initially with a small group of battered survivors in a remote corner of Brooklyn, managed to spiritually revolutionize the post-Holocaust Jewish world,” he wrote. “As ‘Positivity Bias’ so compellingly reveals, the Rebbe’s optimism was so powerful precisely because it came in response to the brokenness of the Jewish people and to his own personal tragedies. Whether or not you are a Hasid of the Rebbe, Rabbi Kalmenson has given us all a gift, to be read and re-read as a companion through life.

“Bringing together the brilliant psychological insights of the Rebbe with a keen understanding of the most recent studies of human behavior, the author aims for nothing less than a guide to self-transformation in the spirit of Torah and Jewish teachings,” he continued.

“Rarely have I so often interrupted my reading to share with family and friends fascinating anecdotes and ideas as I did in the midst of devouring this extremely well-written book which I simply could not put down. Trust me – it is a must-read you’ll treasure evermore.”

Learn more about this book and place your order at www.chabad.org/PositivityBias