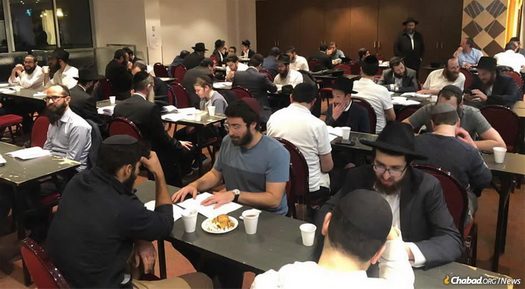 Worldwide Program Aims to Study All of the Rebbe’s 1,562 Chassidic Discourses

During his 40-plus years of leadership, the Rebbe, Rabbi Menachem M. Schneerson, of righteous memory, spoke publicly for thousands of hours. On any given occasion, the Rebbe might discuss the weekly Torah portion, a difficult passage in Maimonides’ code, a perplexing Midrash, Jewish communal affairs, societal issues, foreign affairs and more. Unique among these talks were the maamarim, formal Chassidic discourses. Before a maamar, the Chassidim would sing a wordless melody, solemnly readying themselves and rising to their feet to receive the new revelation of G‑dly wisdom. Although the Rebbe was generally an animated speaker, the maamarim were delivered with a steady rapidity in a traditional, meditative chant. All told, the Rebbe delivered 1,562 maamarim.

In preparation for the 25th anniversary of the Rebbe’s passing on 3 Tammuz, to be observed this year on Shabbat, July 6, Chassidic communities around the world are joining forces to allocate the study of the maamarim.

So far, 25 communities—from Johannesburg to Jerusalem, from Montreal to Manchester, and from Buenos Aires to Brooklyn—have signed onto the campaign.

Based on projected number of participants, each city was assigned a year or more of maamarim to study. In most cases, the community plans to gather in a synagogue or communal hall where the learning will take place under one roof.

The learning will then be followed by a raffle for airfare to New York, so that the winner may represent his community at the commemorative events that will take place during the week of the anniversary.

The idea was initiated by Australian businessman Josh Goldhirsch, who saw success in smaller-scale campaigns in his home town of Melbourne.

Before Passover, Goldhirsch invited members of his community to study a discourse of the Rebbe together. He expected no more than two dozen people to attend, but was amazed when nearly 90 showed up, eager to learn.

Then, in advance of Lag BaOmer, he invited them to return, this time to divide among themselves study of the Rebbe’s 38 maamarim related to the Omer period and Lag BaOmer. After 130 people participated, he realized that he had the potential to go global.’

To orchestrate the campaign, Goldhirsch teamed up with Rabbi Tzvi Altein and Rabbi Yossi Kamman of the Vaad Talmidei Hatmimim (a student organization of the worldwide Chabad yeshivah network), and enlisted Rabbi Shneur Lange to coordinate the project.

“This is all about community members worldwide, whether they are business people, professionals or otherwise, learning the teachings of the Rebbe,” says Goldhirsch. “We really want this to be a gift to the Rebbe from all people, even those who may not otherwise have the opportunity to learn on a regular basis.”

Although the campaign is a one-time event, Goldhirsch expects its effects to be long-lasting. “Learning Chassidus changes your perspective,” he explains. “I hope that this will bring people to come back to learn more—weekly, daily, or even monthly—inspired what they experience now.”

To sign up your community, or even as an individual, email admin@chassidus.com.au