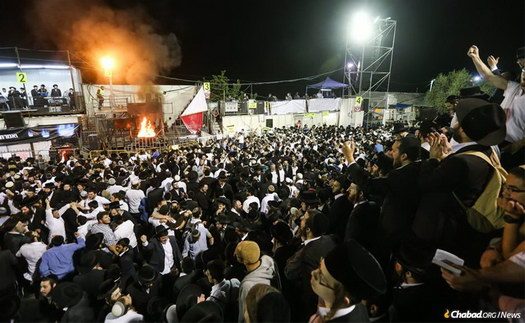 Most Chabad centers host many and varied large annual get-togethers, including festival celebrations, High Holiday services, Chanukah lightings, fundraising dinners and, of course, their ever-expanding Passover Seders, where attendance topped out this year at around 3,000 at just one in Thailand.

But once a year, the Chabad-Lubavitch representatives of Meron, Israel, Rabbi Yosef Yitzchok and Chana Ruth Halperin, trump them all without having to put out so much as one promotional flyer.

That day is Lag BaOmer, this year Wednesday night and Thursday, when well more than a half million Jews will flock, as they do every year, to the Halperins’ jurisdiction, a village of 938 residents containing the hilltop tomb of the great Kabbalist and Talmudic sage, Rabbi Shimon Bar Yochai, author of the holy Zohar.

It is the yahrzeit of the luminous sage and the day when Jewish tradition holds that healing, softened judgments and answers to other prayers are available, especially to those who ask for his intercession above. It is also the day in Jewish history that marks the end of a plague in which 24,000 students of the Talmudic sage, Rabbi Akiva, died for their lack of unity.

After a few unsuccessful attempts, Chabad.org finally landed a brief interview with the visibly harried rabbi in his office, a short walk from the tomb. He had just returned from the regional government office that hands out licenses for, among other things, tent erection and sales. Halperin had gone to apply for a license for Chabad’s massive annual Lag BaOmer tent sale, devoted to the dissemination of books on Kabbalah and Chassidut at deeply discounted prices.

Plus a Kids’ Parade and Post-Holiday Shabbat Gathering

The task was one of three on the top of his to-do list, he said, along with checking a sample handout from the printer for his annual Lag BaOmer children’s parade and finalizing details for a big gathering he holds on the Shabbat after Lag BaOmer.

“Many people come here seeking miracles and salvations as we believe are available by connecting to a righteous person of the Rashbi’s [acronym for Rabbi Shimon Bar Yochai] level on his yahrzeit [anniversary of the passing],” Halperin said. “By learning the inner dimension of the Torah through Chassidut or Kabbalah of which the Rashbi was the master, anytime, with someone else or by buying a book of your own on Chassidut, you can bring the Rashbi into your home all year.”

The momentous occasion marks the 33rd day of the counting of the Omer, the biblical commandment to count the 49 days between the Jewish people’s exodus from Egypt on Passover and their receiving of the Torah on Shavuot at Mount Sinai. The word, “Lag” in its title is the number represented by the two Hebrew letters, lamed and gimmel, that make up the word.

Jewish custom calls for certain mourning practices to be in place during this time to commemorate the passing of Rabbi Akiva’s students. Hair is not cut, music is not sounded and weddings and other joyous events do not take place.

But because of the cessation of the plague and the explicit request of the Rashbi — who became one of Rabbi Akiva’s hand-picked students in a later generation— that the day of his passing on the 18th day of the Hebrew month of Iyar, Lag BaOmer, be a day of celebration and joy rather than mourning, virtually all of the mourning customs are suspended.

Bonfires, Parades, and Lots of Haircuts

The mega-gathering in Meron and the countless celebrations that take place the world over on Lag BaOmer stand in stark contrast to the lack of unity that caused the plague that killed Rabbi Akiva’s students.

Since the 15th century, Jews have congregated at the site to celebrate on Lag BaOmer, in recent years with 24 hours of non-stop music and dancing, bonfires and words of Torah bellowing from speakers and stages scattered throughout the area. The day is also marked by the first cut of a boy’s hair at age three, a Jewish custom known as an upsherin, symbolic of the biblical commandment prohibiting the picking of fruit on trees before they turn 3.

The tradition to light bonfires on Lag BaOmer eve commemorates the immense light that Rabbi Shimon introduced into the world via his mystical teachings. This was especially true on the day of his passing, Lag BaOmer, when he revealed to his disciples secrets of the Torah whose profundity and intensity the world had yet to experience. The Zohar relates that the house was filled with fire and intense light, to the point that the assembled could not approach or even look at Rabbi Shimon.

As Halperin worked in and out of his office Sunday to prepare for the arrival of 60 rabbinical students to help administer activities such as tefillin wrapping sessions throughout the festival day, the finalization of a video featuring the Rebbe, Rabbi Menachem M. Schneerson, of righteous memory, to be played prominently for the masses of visitors and the packaging of gifts for the thousands of 3-year-olds who come for their first haircut, signs that the festival was fast approaching were evident everywhere.

Police were already in position to monitor preparations for the festival, estimating that the crowds would again be in the 600,000 range, similar to last year, when the number represented a record.

Trucks filled with holy books and other artifacts such as Jewish jewelry, to be sold throughout the festival, moved in and out of the front gates, carefully checked by security police. Metal frameworks for food tents and music stages also dotted the hillside leading to the gravesite. At the same time, early visitors planning to spend much of the week in Meron, began arriving at a trickle.

One of them, Shimon Arzhuon, 30, of Jerusalem who had made the trek every year since age 10, had just found the last parking place in the area outside the rabbi’s home and office. Asked why such an early arrival, Arzhuon said: “It’s an amazing feeling that starts in the days before Lag BaOmer. It’s a big day, a day of salvation and I come early to start praying for everything.”

Hailing from even farther away, the southern Israel city of Ashdod, recently hit hard by an onslaught of deadly rockets from Gaza, Yehuda Roth, 18, was motivated to make the trip on his own behalf and that of a family that needed his assistance during their trip.

“It’s very exciting,” said Roth, relieved to be out of range from the intensity of Gaza rocket fire. “It’s a big day. Many salvations of different kinds for all areas of life.”