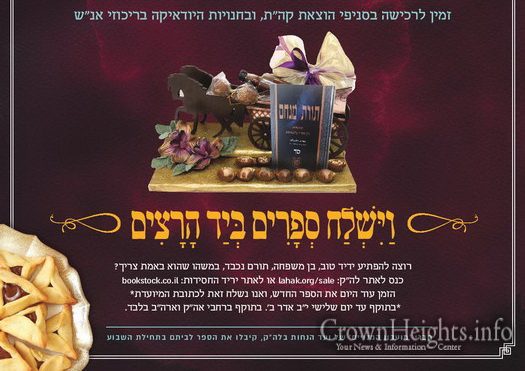 Just in time for Purim, the 64th volume of Toras Menachem has arrived in stores. The new book, published by Vaad Hanochos B’Lahak contains the Rebbe’s Sichos and Maamarim from Shabbos Parshas Tzav – this week’s parsha – through Yud Beis Tammuz 5731 (1971), and is being snatched from shelves to serve as the best Chassidisher Mishloach Manos of the season.

The sefer contains a treasure trove of fascinating Sichos and Maamarim. These include the famous Maamar of B’yom Ashtei Asar, and many Sichos about Mihu Yehudi.

The following is a choice selection from the book (some quotes were condensed for clarity):

“Don’t suspect that I know all the responsa of Acharonim . . . ”

During the Shabbos Farbrengen of Parshas Tzav, the Rebbe asked a question on a Rashi, and cited an answer of Rabbi Meir Shapiro with the following preface:

“The Rabbi of Lublin, Rabbi Meir Shapiro, attended my wedding in Warsaw, and gave me his sefer, Shut Or Hameir, as a present.

“During the wedding and Shevah Brachos, my father in law, the [Frierdiker] Rebbe wanted me to discuss Torah with him, but I tried to evade doing so. However, since my father in law liked him very much, I perused his sefer, and noticed a Teshuvah regarding this Rashi.”

After concluding the story, the Rebbe smiled and added:

“So you shouldn’t think that I’m fluent in every Teshuva of the Acharonim. I saw this specific Teshuva, and it remained in my memory…”

The Danger of the Draft

On Tu Bishvat that year, the Rebbe announced a Mivtzah to “conquer the world” through Torah learning, and continued on that theme for months afterwards.

During the Shabbos Tzav Farbrengen, the Rebbe explained why he announced the Mivtzah:

“While at the Ohel, I felt an urge to hold a Farbrengen, without understanding why. What should I say, which Maamar, and so on…

“We now see the Divine Providence in the matter: A large conference has been held in recent days regarding the government’s desire to draft Yeshivah students, and, thank G-d, the decree was averted. Now the reason for that Farbrengen has become clear; it was to ‘precede the illness with the cure.’ In this merit, the decree was abolished.”

On the Shabbos of the N’shei Chabad convention, the Rebbe address the concept of “Women’s Liberation”:

“The answer is: Holiness can never cause a loss of a Jewish child; if it does, it is an undesirable ‘holiness.’

“Don’t think that it will deduct from your other holy endeavors; we are assured that nothing will be lost, and everything will be achieved to its fullest.”

The new book is available at Kehos and Judaica stores in Crown Heights, and in Anash communities around the world.

To order the book online to be delivered to your home: