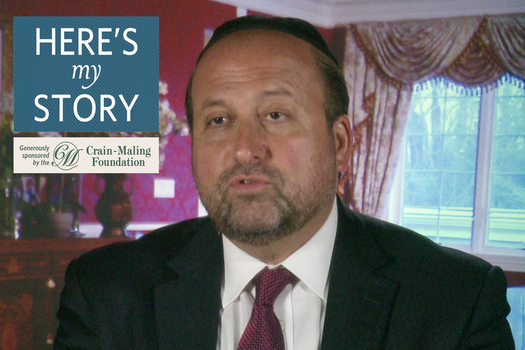 I was born in Casablanca, Morocco, where my father, Rabbi David Bouskila, ran a network of Jewish schools.

Although we were of Sephardic background, my father had very strong ties with the Chabad emissaries in Morocco. He always said how much he admired their work, and even envied “their spirit of self-sacrifice” – that’s how he put it.

At one point he was asked to translate the Tanya – the seminal work of Chabad’s founder, Rabbi Shneur Zalman of Liadi – into Judeo-Arabic. But this was a very difficult task, especially since he was very busy running all the schools. So, at first, he declined. But then the Rebbe wrote him a personal letter telling him it was his mission to do this. This caused my father to give the matter grave import, and, after studying the Tanya in depth with Rabbi Yehuda Leib Raskin, he got started.

As he was working on the translation, he would share with us words of Torah from the Tanya every Shabbat. And once he told us – all of us, his ten children – that anyone who does not learn the Tanya will never know how to serve G-d the right way. This was a very strong statement for my father to make, and it made a great impression on me.

By January 1980, my father had finished a major section of the translation, and the Rebbe invited him to come to New York for a farbrengen that January. He very much enjoyed the visit, especially his private audience with the Rebbe. He later said that, the entire time he was talking with the Rebbe, his eyes were flowing with tears, because he was so awed by the Rebbe’s holy presence which he compared to “an angel of G-d.” But he would not tell me what he and the Rebbe spoke about.

A couple months later, I myself came to the U.S. to study at the Lakewood yeshivah in New Jersey, and that is when I was introduced to my future wife and we decided to get married. But when I informed my father, he objected: “You didn’t go to America to get married, you went there to learn, and we don’t know anybody there, so how can we merge our families? Why are you doing this to us?”

There were many phone calls after that between me and my father and my mother. When they understood that I was not giving up on my plan to get married, my father said, “If that is your decision, then before you proceed, please meet with the Rebbe and ask his opinion. If he says that you should get married, then I will say Mazal Tov, but if disapproves, then you must give it up.”

I told my fiancée all that had happened and, together, we came to see the Rebbe. Our appointment was for 7 p.m., but not wanting to be late we arrived at 6 p.m. We sat in the waiting room watching all that was going on there. We saw people coming and going – including some who were clearly dignitaries because they arrived in a limousine – and, at one point, a person was brought in on a stretcher. Finally, at 10 p.m. or so, we went in.

In advance, the Rebbe’s secretary, Rabbi Leibel Groner, said to us, “I’m giving you exactly two minutes.” And I said, “I don’t need more.” But we stayed for over fifteen minutes.

As we walked in, I was trembling. I had grown up with the Rebbe’s picture hanging in our living room, and here he was in person, looking at me with those piercing eyes of his. And then, before I even had a chance to open my mouth, he asked me, “Are you the son of Rabbi David Bouskila?” And of course, I responded, “Yes, I am.” After that he wanted to know what I was doing in America, and he also asked my fiancée about her background: “Where were you born? … Where did you learn? … Where are your parents from?”

When he asked her if she knew my parents, she answered that she had not met them as yet. And then he said to her, “You should know that thanks to Rabbi Bouskila’s translation of the Tanya into Arabic, the Final Redemption will come that much sooner. It is written that, in the End of Days, the strength of the Ishmaelites – the Arab peoples – will be felt all over the world. But by translating our holy books into Arabic we are able to counter their power and influence and hasten the coming of the Messiah.”

Then, the Rebbe turned to me and asked, “What will you do after you get married?”

I answered that I planned to continue studying in yeshivah.

The following day, I called my father and gave him the good news to which he responded, “Brachah v’hatzlachah – May you be blessed and successful.”

And I was successful, thanks in part to the support of my wife’s father, Rabbi Tzemach Levi Kadi. He was of Yemenite background, but he became so taken with the Moroccan synagogue I later established in Flatbush that he became one of my chief backers.

The synagogue, which is now known as Congregation Netivot Israel, started out as a minyan for Moroccan Jews. But it grew quickly as there was a great demand for services in the Moroccan tradition.

I was young and unsure how it all was going to work out financially, but my father-in-law gave me some great suggestions and, in our first effort, we raised $250,000.

And then we went to see the Rebbe on a Sunday in the winter of 1986, when he was giving out dollars for charity. My father-in-law told the Rebbe that he was pushing me to build a synagogue, to which the Rebbe responded, “Yes, you should build a synagogue. And may you be blessed and successful in this effort.” Then he added, “You will find the money; you will build what the community needs.” And he gave me a few dollars.

That very day, quite by accident, we found the perfect location for our synagogue at 1617 Ocean Parkway. We bought it, and today it is a little Moroccan jewel. And every holiday, we invite all the Chabad emissaries to come to us in recognition of the role that the Rebbe played in our success story.

Rabbi Gad Bouskila has served as the rabbi of the Congregation Netivot Israel since 1986. He was interviewed in June of 2018.