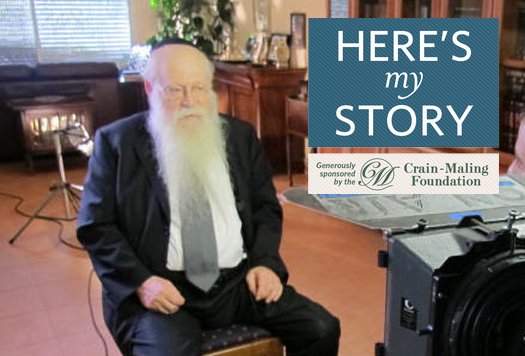 I was born in Rotterdam, Holland, to a Torah observant family. Despite the hardships involved, I never went to school on Shabbat, and even when our lives were in danger during World War Two, my parents refused to procure false papers declaring that we were Christians. My mother said it would be better that we go to a concentration camp than abandon Torah. Indeed, that is what happened – we were taken to a concentration camp in Holland and then to one in Czechoslovakia, but we were ultimately liberated by the Red Army.

After the war ended, I was enrolled in a Jewish high school in Amsterdam, and that’s where my connection with Chabad began. At a Jewish youth hostel in the city, I met a Lubavitcher chasid who had studied at the Chabad yeshivah in Israel. I was impressed with him and, because of his influence, I decided that I also wanted to study there after graduating high school. And that’s what I did.

At a certain point during my stay in yeshivah, I began to have doubts about certain aspects of the Jewish faith and to slack off in my studies. I misbehaved so badly that at one point the director of the yeshivah told me, “This is not a hotel or a restaurant. If that’s all it is to you, you should leave.” But I didn’t leave. Instead, in August of 1959, I decided to write to the Rebbe about it all – and I mean all: my letter was very long, consisting of something like eighteen pages. The Rebbe immediately responded with a long letter himself in which he addressed each of my questions, although he reprimanded me for coming up with so many challenges to Judaism without first putting aside my preconceived notions. I actually didn’t mind the reprimand and received it well because I felt the Rebbe was not sugar-coating anything, which would have sat less well with me.

In my letter I challenged the veracity of Torah and whether it is possible to prove that it was given by G-d at Mount Sinai. The Rebbe responded that we can be certain about the giving of the Torah in the same way that we can be certain about most things in life without proof beyond all doubt. For example, when one buys a ticket to travel by bus or train, one does not first personally examine the vehicle or study mechanics in order to be certain of arriving at one’s destination. Another example that he cited was of a person needing an operation and relying on the competence of the surgeon and on the recommendations of those he has successfully treated. If even in matters of life and death people rely on testimony of others, all the more so when it comes to events that happened in the past.

The Rebbe wrote: “There is no way to discern now whether historical events unfolded in one specific manner or another. Nevertheless, no normal person would doubt the consensus of three or four historians. Even if they contradict each other in some details, the majority opinion is accepted, especially if it is an overwhelming majority, such as ten, one hundred, or even one thousand against one. The majority testimony is then accepted as a verified certainty.”

That said, the Rebbe continued, it is clear that the revelation at Mount Sinai is not just a rumor that began circulating recently. Indeed, this is a tradition that has been passed down over many generations, and with astonishing precision, by the entire Nation of Israel – a fact which makes the Jewish faith unique. Unlike other religions which are based on testimonies of a few individuals, the Jewish tradition claims a revelation in front of a whole nation of millions of men, women and children. The chances that someone would succeed in inventing such a false claim – and then have it meticulously passed down from generation to generation by an entire nation – are nil.

My next three questions addressed Judaism’s view of non-Jews and the differences between Jews and non-Jews. In answer, the Rebbe explained that Jews and non-Jews play different roles in the world. He used the analogy of a human body whose wholeness is achieved when each of its various limbs and organs fulfills its unique and vital role. He said that just as there is no place to ask why the hand can’t feel like the heart can, or why the heart cannot understand and comprehend like the intellect, so too, I cannot ask why Jews and non-Jews have different roles to fill in this world.

Another of my questions concerned the apparent contradiction between the Jewish tradition and the widespread scientific view of the age of the world. The Rebbe explained that science, by definition, is based on accepted hypotheses: “All of the sciences, even those that are called ‘exact sciences,’ are rooted in assumptions that are completely unfounded, and to a large degree are no more than agreed upon theories … Among these assumptions: That the laws of nature have not changed at all, and always were exactly the way they are today; that the atmospheric pressure, temperature, radiation, and several hundreds and thousands of other variables, were always approximately the same as they are now. …”

A direct proof of just how unfounded the scientists’ calculations of the age of the universe are, the Rebbe wrote, can be found in the very disagreements among them which have forced them to contrive all kinds of ad hoc explanations. Yet despite that, they cannot fathom that the world could have been created in a completely developed state. “What would compel someone to believe that G-d could not create man as is,” the Rebbe asked, “but rather that He could only create separate atoms, which would then combine on their own, etc.?”

At the end of his letter, the Rebbe made sure to emphasize that he answered my questions only to “put my mind at ease,” and that I had to recognize that my inclination to immediately ask questions was not correct. I should learn Torah, he wrote, and fulfill its mitzvot, and then I will be successful in developing a worldview.

That letter was the first that I merited to receive from the Rebbe, and there were many more after it. His caring response was very important to me, and I can testify that, following that letter, all of my doubts dissipated. I later learned that the Rebbe instructed the yeshivah director to keep me on even though he had wanted to throw me out. So I stayed and continued my studies without any further confusion.

Rabbi Daniel Eliezer Meijers (1939 – 2015), a former professor at the Vrije University in Amsterdam, was interviewed in his home in Jerusalem in August of 2011. The Rebbe’s letter answering his many questions in Hebrew is reprinted in Likutei Sichot vol. 6, p. 316. An English translation can be found at: www.chabad.org/1890767