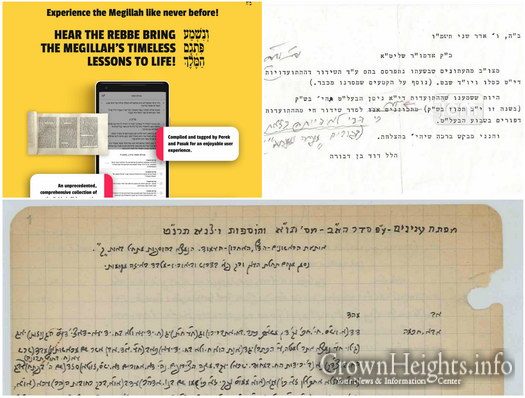 In 1986, when Dovid Krinsky, JEM’s founder, requested the Rebbe’s permission to broadcast the Purim farbrengen live via satellite – as he would for other major farbrengens during the year – the Rebbe politely declined, replying, “Purim is a family affair.”

The Rebbe’s note to Dovid Krinsky, JEM’s founder, in winter of 1986, directing him not to broadcast the Purim farbrengen of that year, and calling the Purim gathering a time of “mishpacha umishpacha — a family affair.”

Indeed, the Rebbe’s Purim feast-farbrengens through the years included a vast array unparalleled of unforgettable moments – both in quality and quantity – many of which, one might say, were not well-suited for a television audience.

Enter Ashreinu.app, a web-app aiming to revolutionize access to recordings of the Rebbe. Curated by a group of yeshivah students, the platform presents a stream of timely and engaging audio clips of the Rebbe. The project resulted from the belief that ease of access and great indexing would increase frequency of use and penetration of the Rebbe’s voice and image.

The Rebbe’s Purim farbrengens included many special Torah teachings, alongside incredible personal moments. Between talks at a Purim farbrengen in the early 1960s, the Rebbe pours l’chaim for a guest.

The young scholars who curate Ashreinu’s content – many of whom are based at the yeshivahbeside the Rebbe’s Ohel – meet regularly with the development team to plan, prioritize, test, and deploy improvements to the site.

The megillah. Audio of the Rebbe’s interpretation on any verse can be accessed instantly.

In late 2018, the content team, led by Yisroel Slonim, pitched the ambitious project to create an interactive megillah – wherein each verse of would feature a direct link to the Rebbe’s talks on the verse. Rabbi Elkanah Shmotkin, JEM’s director, approved the idea immediately. “The project brought together three things: Content, technology and our passion for providing easy and direct access to source materials.” Thus was set off an intensive eight-week cycle of development and content. Building on years of backend infrastructure work and content experience, the Ashreinu megillah was born.

According to Rabbi Shmotkin, it was the Rebbe’s own passion for indexing and encyclopedias and study aids that inspired JEM’s focus on this area. “The only way to provide access to the mountains of amazing content that have been generated over the past twenty-five years,” explained Rabbi Shmotkin, “is through great indexing.”

The Rebbe was the first to index chasidic works. This page from the Rebbe’s Reshimot, journals, is a content index written in the Rebbe’s hand in the 1920s, on the Torah Ohr of Rabbi Schneur Zalman of Liadi, the founder of Chabad.

While JEM has been launching indexed content for well over a decade on platforms such as the Living Torah mobile app, TheLivingArchive.org and others, the megillah project envisioned by the students represented a turning point. “The next frontier for indexing the Rebbe’s vast content output has found a practical launching point,” concluded Rabbi Shmotkin.

Yisroel Slonim sees the project as a microcosm of the Rebbe’s scholarship, calling the interactive megillah “one opportunity for a glimpse into the vast amount of Torah and guidance the Rebbe so generously gave us.”

Together with his team of students, Slonim worked to catalog, tag and write summaries on well over one hundred talks on the megillah. Their immersion in the Rebbe’s Purim addresses illustrated to them that “the Rebbe’s talks touch every single aspect of Torah specifically, and every aspect of life, in general.”

For Yaakov Rozenblat, JEM’s director of technology, the Ashreinu megillah represents a technological feat, calling the project “a proving ground for the incredible backbone” that his team has been building over a course of years.

“From the beginning, senior developers Elchonon Korenblit and Shlomo Morosow imagined, designed, and built the foundations and features necessary to expand Ashreinu far beyond this project,” explains Rozenblat. “The team’s success in building a platform that works fast, light and simple is a testament to their focus on user-centered experiences.”

The Rebbe’s addresses on chapter 3, verse 8 of the megillah. In the highlighted talk, from Purim 1961, the Rebbe explains how the special mitzvot of Purim each highlight Jewish unity — a direct response to Haman’s complaint that the Jews are “spread out and dispersed among the nations.”

But it’s the fusion of content and technology where the project really excels. “It’s important to push the Rebbe’s message out to the world in graceful way. Given the challenges the team needed to overcome, the megillah project was a hugely rewarding journey.”

The development project is funded primarily by members of the JEM Foundation, a group of donors seeking to share the Rebbe’s voice and image with new generations. Danny and Gabi Shapiroa founding member of the foundation, invested in the central content database and the Ashreinu platform. Shapiro found a particular passion for building a robust backend for Ashreinu, praising the development team’s strategic and methodical work. “Ashreinu will continue to grow and incorporate more content types, more index types, and more interfaces,” he predicted. His experience as an entrepreneur who invests in technology leads him to believe the project can continue to be scaled: “The megillah is one type of content – raw audio in Yiddish. But our success has proven that we can continue to reach wider and more diverse audiences,” he observed.

The Purim farbrengen of 1958 lasted over eight hours, and was held in a rented hall on Albany Avenue in Crown Heights.

According to Yossi Katz who, together with his wife N. Dina and family, sponsoredthe megillahproject, the Purim farbrengens have special meaning. “From my earliest childhood,” recalled Mr. Katz, “I remember the Rebbe’s Purim farbrengens as a time when he would shower special blessings upon chasidim and the entire Jewish people.” As the technology team rushed to put the finishing touches on the interface, Katz looking up from an almost-final version of the app, adding: “It’s simply amazing that anyone can take part in these blessings with a tap on a smartphone screen.”

It seems that the Rebbe’s family Purim feast has, finally, been opened up to the entire family.