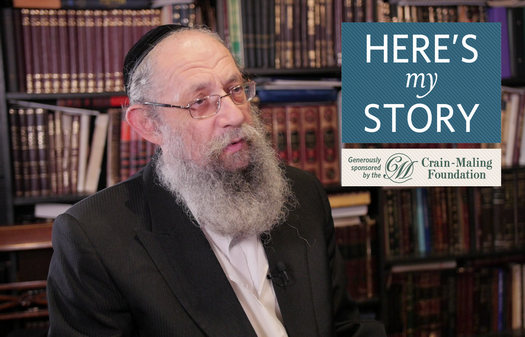 During my early childhood, growing up in London, my father was largely absent. He was very ill and hospitalized most of the time, and so my mother had to go to work, while I was looked after by my grandparents. I remember repeatedly asking my mother, “Where is Daddy?” and her answer, “He will be home soon,” and me pressing, “When?” and she responding “I don’t know.”

But around the time I turned five, something changed. In the beginning of 1958, my father was released from the hospital, and we went to live in Gateshead. That is where life returned to normal, I went to school and all was well.
Years went by and, eventually, when my father was in his late sixties, he developed cancer and started fading away; he entered a hospice and died. During the week of shivah – the seven-day mourning period for the dead – my late younger brother Simcha told me and my other brothers a story. He said, “I can’t hold myself back any longer. I have to share with you what happened while Daddy was in hospice. I couldn’t tell you before because the person who told me this wanted to keep it a secret.”

Simcha then went on to relate that during his last days, my father had a visitor, Reb Yisrael Rudzinski, who had gone with him through the camps during World War Two. Reb Yisrael was a Bobover chasid, a tailor by profession, and he was among my father’s closest friends, the survivors who shared every family celebration with us. When he came to visit my father for what turned out to be their final meeting, my brother left the two of them to speak together in private.
Reb Yisrael was a special person, a very deep and caring person, and coming out of my father’s room, he saw that my brother looked depressed. So, in trying to give my brother courage for what lay ahead, he told him this story.
“Do you know your father was not well when he was young?” Reb Yisrael asked my brother. My brother said he knew about it but it happened before he was born.

Reb Yisrael continued, “When your father was very sick, I once visited your mother and your grandparents. And they showed me a letter which they had just received from the hospital following a doctors’ conference about your father. This letter said that the doctors felt the need to operate on him, but there was a chance that, as a result of their interventions, he could fall into a vegetative state.”

My grandparents asked Reb Yisrael for his opinion. “Who am I to answer such a question?” he replied, suggesting that this was a matter for a top leader in the Jewish world. And he offered to send a letter on their behalf to every major rabbinic figure at the time.

He ended up sending out twenty-three letters, explaining the situation and asking if they should go ahead with the operation or not. He sent out so many letters because he was not sure who might reply. After the war, there was so much sadness and so many questions of loss and heartache that the rabbis were constantly having to deal with.
But he did receive one reply.

The only one who responded was the Lubavitcher Rebbe.

The Rebbe wrote that his heart pained him to hear about such suffering, but that he felt unable to answer the question. However, he wanted to put forward a suggestion he had heard from his father-in-law, the Previous Rebbe, that a person who studies Chitas daily will see salvation.

What is Chitas? It is an acronym for Chumash (the Five Books of Moses) Tehillim (the Book of Psalms) and Tanya (the seminal work by the Alter Rebbe, the founder of the Chabad movement). The Rebbe was recommending that my father begin studying portions of these holy books every day according to a set schedule.

Since the Rebbe was the only one who responded, Reb Yisrael decided to call him directly. After much effort – as in those days long-distance calls were not so easy – he got through to the Rebbe’s office and asked the secretary to please tell the Rebbe that his advice could not be followed because my father was simply too ill to study Chitas. “If so,” the answer came back, “let a family member do it on his behalf.”

“But he lost his whole family in the war,” Reb Yisrael said. “He has no one.”

“If that’s the case, the Rebbe recommends that a friend do it,” he was told.

Although he was not a Lubavitcher, Reb Yisrael followed the directive of the Lubavitcher Rebbe and became that friend who studied Chitas for my father. This is what he told my brother.

After six weeks, my father showed marked improvement, and the doctors began to speak about releasing him from the hospital. And after another six weeks, they did release him.

When that happened, my father followed the advice of Rabbi Moshe Schwab of the Gateshead Talmudical College , who told him to change his place of residence as per the dictum, “Meshaneh makom meshaneh mazel – A change of place can change one’s fortune.” This is why we moved to Gateshead when I was five.

From that point on, until he reached old age, my father was fine – he held down a job, provided for our family and was actively involved in the local Jewish community.

In that momentous conversation, Reb Yisrael told my brother another astonishing thing – “I have not stopped reciting Chitas for the past forty years. And I certainly intend to continue.”
I found this story to be very powerful because it goes to show that we don’t know through which spiritual channel we are being sustained. And it also made me think about all that the Rebbe did for us all and still is doing for us today. I hope this story goes on to inspire everybody who reads it.

Mr. Aharon Denderowitz resides with his family in London, England, where he works as a primary school teacher. He was interviewed in June of 2018.