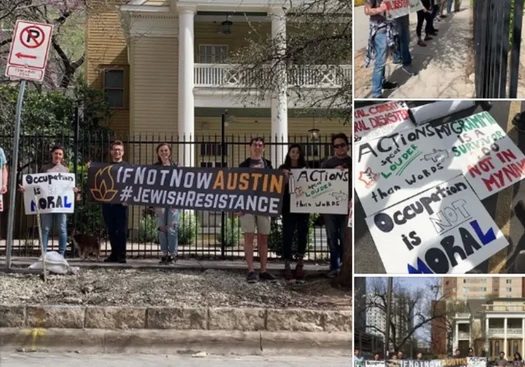 Shabbos at Chabad of the University of Texas was disturbed this week by protests from the IfNotNow movement. The protest were against a speaker that was scheduled at the Chabad House that shabbos afternoon.

At Chabad of the University of Texas, known as UT, shabbos services are not usually disturbed by a group of protesters outside the Chabad House building. Yet this past week, a group of protesters from the IfNotNow movement, which protests against the “Occupation” in Israel, did just that.

Standing outside the Chabad House, the group of protesters attempted to disturb the congregants in protest of guest speaker Leibel Mangel, a former IDF soldier who was due to deliver a speech later that afternoon.

The group allegedly attempted to disrupt though chants and shouted slurs. While some parents reported that the protesters attempted to engage children as young as 4 years old in conversation, and even asked them to join them in song.

Leibel Magel came out on facebook against the protesters, calling them out for the disruption of the shabbos services and the targeting of children.