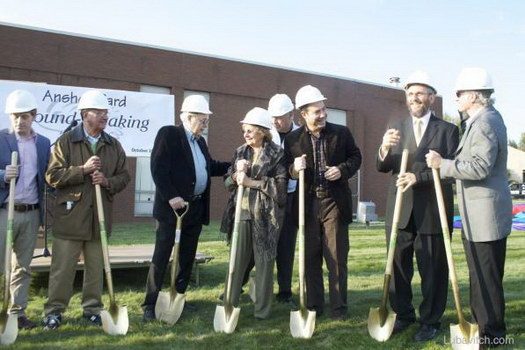 A convoy of one hundred cars rolls solemnly through Akron’s Jewish community. People of every affiliation are coming to pay their last respects to the man “who built this community.” Over the course of thirty years, Rabbi Mendy Sasonkin managed to bridge the centuries-old gaps dividing Akron’s diverse Jewish population, promoting the culture of warmth and unity that has come to define the city’s Jewish community. How will the center hold without him?

Among Akron Jews, Anshe Sfard Synagogue is known for its lively Simchat Torah festivities. Here, the dancing never slows and the schnapps never run low. This year was no different. But there was one thing missing: Their rabbi of twenty-three years was absent. Rabbi Mendy Sasonkin was in hospice care, in his home next door to the shul. He was nearing the end of an eight-year battle with non-Hodgkin’s lymphoma.

Unaware that their beloved rabbi was drawing his final breaths, the congregation kept on dancing. Mendy’s wife, Kaila, had brought in a troupe of bottle dancers to keep the atmosphere festive, and her sons regaled the congregation with a cappella melodies.

Throughout the evening, Kaila sprinted back and forth between her home and Anshe Sfard, making sure that everything was in order in both locations. At around 10:00 p.m., she left the party to be with her husband of thirty years. The Sasonkin children brought the Torahs from the shul. Together, they performed hakafot for their father as he drifted out of consciousness. Simchat Torah had always been his favorite holiday.

At 1:00 a.m., with his wife, parents, children, and siblings by his side, Mendy took his last breath. He was fifty-four. His family attended services the following morning without breaking the news. Only after the hakafot ended did they finally let the others know. The congregants were devastated.

Mendy’s parents were visiting from Israel. His father, Rabbi Avraham Yitzchak Sasonkin, who survived Soviet persecution, appealed to the congregants, explaining that Torah law prohibits mourning during Simchat Torah. The congregation, and even Rabbi Mendy’s family, would have to wait for the holiday to end before giving full expression to their sorrow. Even the death of a loved one must not interrupt the celebrations of Simchat Torah.

Kaila stayed home, her grief compounded as she struggled to contain her emotions. How difficult for a family, let alone an entire congregation, to eschew terrible feelings of loss in favor of happiness. Still, she tried to quell her emotions, shelving her profound sorrow to honor the holiday. It was an impossible demand. Surely, G-d would give her a pass, Kaila thought.

At the funeral, Anshe Sfard’s president, Joel Stile, announced that the rabbi’s son, Moshe, who had been Chabad’s representative to Kent State University, would become the shul’s new rabbi. Kaila would continue her responsibilities as the Rebbe’s emissary to Akron, and Moshe would take over his father’s activities at Chabad of Akron. The circumstances were extraordinary, but Akron would not be without its leaders.

Chabad representatives—shluchim, as they are called—have earned a reputation for their uncommon staying power. They set out for their new posts with one-way tickets and undying commitments. Fired up by their mission, they work tirelessly to grow communities and build larger-than-life experiences that will outlive them. And when the time comes, sometimes unexpectedly, the torch passes from one generation to the next.

Jewish immigrants first arrived in Akron in the mid-nineteenth century, but it wasn’t until 1865, the year that marked the end of the American Civil War, that an official congregation formed in town. Together, twenty men established a Reform organization called the Akron Hebrew Association. Today, it’s known as Temple Israel, just one of Akron’s three congregations. Anshe Sfard, the Orthodox synagogue, was established in 1915, and Beth El, a Conservative congregation, formed in 1918.

The Sasonkins arrived in Akron-Canton shortly after their marriage in 1988, just as the city’s Jewish population began dwindling from six thousand to less than half that number. The Chabad couple launched a wide range of educational activities in order to reach children and young families. They used space at the local JCC, and occasionally, at the Anshe Sfard synagogue. Rabbi Abraham Leibtag, Anshe Sfard’s long-time, beloved rabbi, was in poor health, and the synagogue was losing members. He welcomed the young energy and the influx of children that the Sasonkins brought to town.

In 1994, the board of Anshe Sfard had a decision to make. “We weren’t sure whether we should continue our operations or merge with another synagogue,” Joel Stile told the Akron Jewish News. In an effort to keep the synagogue’s doors open, the board asked Rabbi Mendy to take over. He agreed on the condition that they install a permanent mechitzah.

“There was some pushback over the mechitzah,” says Mendy’s brother-in-law, Rabbi Zushe Greenberg, Chabad emissary in Solon, thirty minutes away. “But the congregation wanted him—his personality, his leadership. His goal was to make every Jew in the city feel comfortable in the synagogue.” Even with a mechitzah.

In January 1995, when Mendy became the rabbi of Anshe Sfard, several families left for the Conservative synagogue. “They wanted to sit together,” Kaila recalls. But Mendy was magnetic, and he built a culture of acceptance that neutralized people’s fears about Orthodoxy. In time, some of those who left came back. The congregation began to grow. Mendy’s way of embracing people drew them in. “The rabbi, along with his wife Kaila, brought us from the brink of extinction to a healthy, vibrant congregation in only a matter of a few years,” Stile said.

Ten years ago, Rabbi Mendy dusted off an old set of architectural plans that Anshe Sfard’s earlier board members had commissioned. When the synagogue was first built back in the 1970s—well before the Sasonkins arrived—funds ran low, so plans for a larger sanctuary and education center were shelved. But Rabbi Mendy decided the time had come to move forward and realize their vision.

Community members tried to dissuade their rabbi from the $6 million plan. They worried that the project was too ambitious, and they’d end up deep in debt. But Mendy promised that he’d deliver the full amount and persuaded his community that the reward would justify the risk.

True to his word, he raised the entire sum from the Greater Akron Jewish community of only three thousand households. “We now have a beautiful and well-functioning building with no mortgage or debt,” Stile says.

Joe Kanfer was in the boondocks of Northern Georgia when he found out that his dear friend had died. “I lost my rabbi,” he said through tears—the words “my rabbi” booming in his soul. It was 10:00 p.m. There was no cell service, and he was “three-and-a-half hours from nowhere.”

Kanfer, the CEO of GOJO Industries and the inventor of Purell, the ubiquitous hand sanitizer, tried to charter a plane, but he was fogged in. Determined to make it to the funeral of the man whose “incredible mentschlichkeit, integrity, and love” Kanfer so deeply cherished, he found a ride to another airport an hour and a half away, and boarded a flight to Ohio. He arrived at Mendy’s funeral five minutes before it started.

Seven hundred people packed Anshe Sfard’s social hall. Filling the space to standing-room only were members of the local Conservative and Reform congregations; the JCC; Rabbi Mendy’s rec center basketball team; those who knew him from the shul in Canton where he had served from 1989-1994; state officials; members of the local police force; security personnel; and people who had connected with Mendy from Cleveland and beyond. The sense of loss was universal. But it was also profoundly personal.

Kanfer gave the first eulogy. He spoke about the Chasidic rabbi with a “twinkle in his eyes” who transformed a community. “He never compromised on his own principles,” Kanfer said to the rapt, sorrowful mourners, “but he allowed us to be who we were. Somehow he knew our souls. When you were with him, you knew G-d was in the room.”

Weeks later, Wendy Macher reflects on Mendy’s transformative impact. “It was like a spark that turned into a blaze.” On Simchat Torah in 1995, the rabbi convinced Wendy and her husband Jerry to make a radical change. Buoyed by the joy of celebrating Simchat Torah with the Sasonkins, they agreed to move from Canton to Akron and start sending their children to an Orthodox day school. According to Wendy, the move exposed her family to a yiddishkeit so enriching that it redefined them. She says that her family is forever “indebted to Rabbi Mendy.”

In his twenty-three years leading Anshe Sfard, Rabbi Mendy never once missed a Simchat Torah with his community, and Kaila never gave up hope that her husband might gather the strength to walk onto the bimah once again. “I knew how bad things were. Mendy’s cancer was metastasizing everywhere. Two weeks before he died, the doctors gave him three days.” Still, she and Mendy focused on the positive. “I prayed for a miracle.”

Now, months later, the dust is finally settling, and the void looms large. Kaila lost her teammate, the father of her children, and the leader who held the lives of so many people together. She is still making sense of how she tried to contain her grief on Simchat Torah. Perhaps it was her grandmother—who was a young mother of five when her husband was murdered by the Communists. “She was not only resourceful, but she raised her children with joy through terrible times.”

The tradition in which Mendy and Kaila grew up—dual lineages that survived decades of persecution by maintaining exquisite focus as Chabad Chasidim—taught them that the inner resources of their Chabad upbringing could sustain them through the greatest challenges. Together, Mendy and Kaila raised ten children in a joyful, energetic home, optimistic even in the face of Mendy’s fateful diagnosis. Now, grief comes in waves. But Mendy’s love and his joy for life have a stronger presence.

It’s a Friday afternoon, and Kaila apologizes. She has to cut our conversation short. It’s the monthly “Young Family Shabbat,” and she still has prep work to do. Sponsored by the Kanfer Family Foundation, the event offers a unique kind of Shabbat experience for Akron families with young children—one where kids are at the center of the services and meals.

Kaila’s sons and daughters are there, working with their mother to keep things moving along.

“More people have been coming to join the shul now and are looking to get involved,” says Mendy’s son, Moshe. “They want to participate in my father’s legacy and work with us to build on everything he achieved with his love and joyfulness.”

Chabad emissaries sometimes choose to be buried near the resting place of the Lubavitcher Rebbe, at the Old Montefiore Cemetery in Queens, New York. Shluchim dedicate their lives to the Rebbe’s vision, and that often means traveling far from the home and community that nurtured them. Like Isaac, Jacob, and Joseph, they want their final stop on this sojourn to be “with their fathers.”

But Mendy was the Rebbe’s emissary to Akron, Ohio, and even death could not separate him from the place and the people of his life’s mission. “In his good-humored way, he’d often remind local community members that they were stuck with him. For better or worse, he was here to stay,” says Kaila.

On October 3, hundreds bid their beloved rabbi a last farewell. With his parents and siblings, his wife and ten children, supporting each other, Rabbi Mendy Sasonkin, born and raised in Israel, rabbinically trained in Brooklyn, was laid to rest in Akron’s Anshe Sfard cemetery.

A Chabad representative in life and in death, Rabbi Mendy’s abiding commitment to his community is echoed by his colleagues. Chabad representatives scattered across the globe, they strive with all their being to answer the Rebbe’s calling—to fan the spark of yiddishkeit that flickers within every Jewish soul.