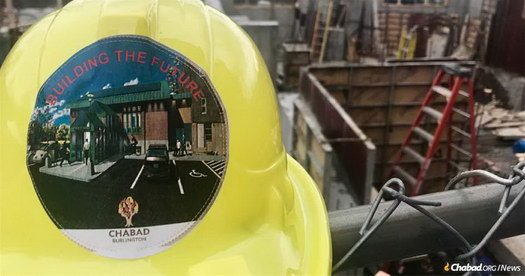 The new Chabad center in Burlington will not only will serve all the segments of the Jewish community but will also complete a multi-generational Jewish circle in Vermont.

When Simone Blankstein, 35, moved to Vermont with her husband five years ago, she went to the Chabad House in Burlington to meet new friends. Since then, the couple has taken part in holiday programs and other events and classes at the Chabad center, which is currently bursting at the seams, and is on the cusp of an expansion and transformation.

“Now we go to see our friends,” says Blankstein, who adds that the new facility “will enable even more people to connect.”

Thirty five years into their emissary work in the area, Rabbi Yitzchok Raskin, co-director of programming at Chabad of Vermont, says he and his wife, Zeesy, are thrilled not only to be completing a space that will serve all the segments of the Jewish community but also completing a multi-generational Jewish circle in Burlington.

Zeesy Raskin’s grandparents, Rabbi Avrohom and Rochel Leah Popack, left Russia for British Mandatory Palestine just before World War I and then settled in the United States. Her grandfather found work in Barre, Vt., as a kosher butcher and a teacher, and brought over his wife and baby (they went on to have six more children). Her father, Shmuel Isaac, was born to them in Barre in 1919. “He was very excited that we were moving to Burlington,” she notes of her father, who passed away six years ago. “He was very excited to see Yiddishkeit continue to grow in the area.”

Nearly an hour away from Barre, Burlington had once been known as “Little Jerusalem”—a place bustling with kosher bakeries, synagogues and a mikvah in her father’s time. But the next generation of Jews mostly moved to larger communities or drifted away from Jewish observance and traditions, and the area changed, she explains.

Zeesy Raskin grew up in the Crown Heights neighborhood of Brooklyn, N.Y., and got married in 1982. In the winter of 1983, the young couple was appointed by the Rebbe—Rabbi Menachem M. Schneerson, of righteous memory—as the new Chabad-Lubavitch emissaries to Vermont. One of the first actions of the newly minted emissaries was to approach Mayor Bernie Sanders’ office and request permission to light an 8-foot menorah on the steps of City Hall as part of the worldwide public mitzvah campaign spearheaded and inspired by the Rebbe.

That year, working with Richard Sugarman, a professor of philosophy at the University of Vermont, Sanders declared the national “Education Day” proclaimed in the Rebbe’s honor.

Even so, there was little Jewish activity in town when they arrived, she says. The Raskins started inviting people over for Shabbat dinner and established a summer camp. Then she started teaching classes for children and women while her husband gave classes for men. The preschool followed, which started with three or four kids, and now has close to 50. They added Hebrew school and kosher food for travelers and built up programs to attract locals and visitors alike. These days, more young families are moving to town and seeking the Chabad out as well.

Joe Greenwald moved to Burlington from New Orleans in 1976. He came to pursue a writing career and married his wife, Naomi, there as well. Chabad’s legacy in the area is strong, he says.

“Rabbi Raskin has done a great job expanding the community’s reach and moving on to other areas,” says Greenwald, noting how the rabbi has grown Chabad’s presence geographically and demographically, reaching out to young professionals and college students in the area.

‘A Good Group of Regulars’

Ed Wolfstein, an architect in Burlington, helped the Chabad renovate its center nearly two decades ago. He says he’s happy to be helping with the latest expansion, an idea that has been in the works for a few years.

It’s a project that will add flexible space for the center to host large events, instead of having to head off-site to a hotel ballroom, for example. The new addition will also have room for a library, cafe, bigger kitchen, indoor playground and office space, he says, in addition to the mikvah. There will be a large sanctuary that can be converted into an event hall. The expansion will also free up room in the old building for the growing preschool and classes.

As someone who uses Chabad’s spaces—Wolfstein first got involved more than two decades ago when his daughter attended preschool there—he says it’s easy to take part in the design process for the expansion. After all, as a participant, he knows what’s necessary. “We have, I would say, a good group of regulars who you see on a regular basis,” he says of the community.

There are three Chabad couples in Burlington now: The Raskins focus on the community at large; Rabbi Eliyahu and Draizy Junik work with young professionals and families, and a third couple is involved with the nearby college campus.

“It’s very exciting about the building; it’s something that has been in the making for a long time,” he says. “We think the new building will change the whole atmosphere and will be the push to help things grow even more.”

Being in Burlington is especially meaningful for him and his wife because they’re back in Vermont, where his wife’s father was born and her grandparents lived. Having local roots closes the circle, he says.

The new building will be just behind the old one. “I think when the place is nice and inviting and modern, it attracts more people,” says Wolfstein. “So that’s what we’re hoping.”

Draizy Junik, the Raskins’ daughter, moved back with her husband, Rabbi Eliyahu Junik, in 2014 to co-direct programs at Chabad of Vermont for young professionals and families. “With time, I’ve seen a lot more young Jewish families moving here, and right now, there’s a whole scene of young Jewish professionals. That just wasn’t the scene when I was growing up,” she notes.

Rabbi Junik says he expects the new addition to create a lot of buzz. “I think it’ll be a center for young families to come, and they’ll call that home. It’ll be their Jewish place—their children’s school, Hebrew school, coffee stop, playroom, shul to do their bris and bar mitzvahs. They’ll feel that this is their center.”