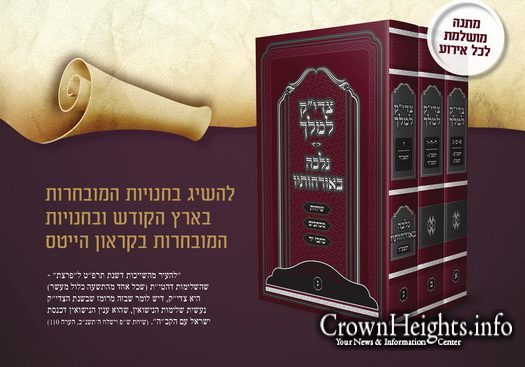 In honor of the 14th of Kislev, which marked the 90th (‘Tzadik Lamelech’) wedding anniversary of the Rebbe and Rebbetzin of righteous memory, the much sought after journal series “Tzaddik LaMelech” was reprinted in a newly released version as a 3 volume set in a handsome slipcase.

This series is known to be the first and trail blazer in dispersing new materials of the Rebbe, ‘Pirsum Rishon’, to the Chabad community, starting after 27 Adar 5752 (1992-1996).

Since their original release more than 25 years ago, the 8 journals have not been available to the public. After numerous requests in recent years, the entire series has been reprinted, with a new and updated index and table of contents to help the reader search topics with ease. A historical preface, introduction, references, and many hundreds of typographical corrections have been added.

It was on the 27th of Adar 1 in the year 5752 (1992), approximately 27 years ago, when in one moment a terrible situation of concealment struck, that the world could no longer hear the Rebbe’s holy voice.

After 42 years of the Rebbe’s leadership, and especially the last years when almost ever day the Chassidim would merit to hear a Sicha, receive a dollar or Kuntres, attend a Farbrengen, etc., all of a sudden this came to a halt, no Sichos were being heard, no written answers were being received.

Some of the young Bochurim, decided that the constant flow of the Rebbe’s Torah being printed needed to continue. They began to search through archives, and started to print booklets, entitled “Tzaddik Lamelech”. The name reflected on the 90th birthday of the Rebbe (1902-1992), when the first issue was published, for 11 Nissan, 5752.

The editor was Eliezer Zaklikovsky, who worked with a team of dedicated and talented Bochurim, in deciphering, typesetting, proofreading and preparing the material for print (before the digital revolution!). They began to publicize hundreds of Sichos, letters, manuscripts, pictures, all for the very first time. This was like fresh water on a tired and thirsty soul.

With this, the young men paved a new way, to publicize archival material of the Rebbe that had previously not been printed. After this breakthrough, it slowly became a common occurrence, for people to release their own archives in the form of Memento’s – ‘Teshoros’, for weddings, Bar Mitzvahs, etc.

Eight booklets were published in this series, which included hundreds of Sichos (by topics), letters, manuscripts, hand written notes in the Rebbe’s handwriting, Yechidus conversations, documents either connected to the Rebbe directly or to his family, and more.

The booklets were sold out as soon as they were printed, and they quickly became an integral part of the personal library of Anash, Chassidim, Shluchim and Bochurim.

However, it has been many years that they have been out of print, and it has been impossible to get copies. Younger Chassidim yearned for these treasures with no way to obtain them.

The Editor in chief, Rabbi Eliezer Zaklikovsky, who now serves as a Shliach in Monroe, NJ, decided to once again organize the entire collection for print, in 3 beautiful oversized volumes.

The result is more than 2000 pages, filled with a treasury of first-time publicized material that encompass the entire gamut of Torah, teachings, writings, and activities, of the Rebbe in our generation, the Dor HaShvii.

The new books are available at Kehot and other fine bookstores at a discounted price during the Hey Teves season.