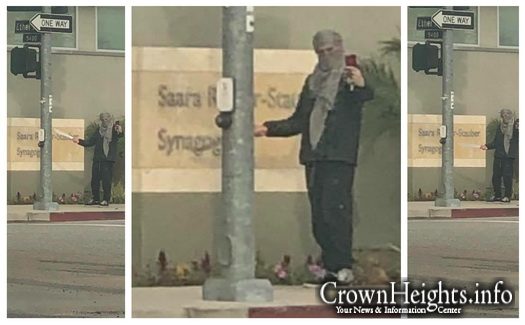 A man is in custody after being caught on camera taking a selfie next to Chabad of North Hollywood, holding a machete and sporting a kafia. The man was tracked by police to a nearby house and detained.

A person named Noah Oiknine was driving near the Chabad of North Hollywood, and  witnessed a very suspicious person taking a selfie next to the sign naming the location as a synagogue. The man, wearing a kafia on his head with his face covered, was holding a machete and pointing at the sign.

Feeling rightfully suspicious, he called 911 and posted pictures of the man on social media.

The police came, and after obtaining video footage of him getting into his vehicle, were able to track his licence plate.

The man was taken into custody pending an investigation into the incident.

Noah Oiknine, posted the pictures on his facebook page saying “I took these pictures and just witnessed A man with his head covered in a turban with a huge hatchet and sword was making threatening gestures towards the Chabad and the Jewish people! EVERYONE BE ON HIGH ALERT! I already called the police and made a report. Share this message and post and call all your Shul’s and make sure they have armed security in front! I have also called local rabbis to spread the word. I saw him drive off in a white Toyota Corolla, couldn’t catch the plates.”