« Weekly Unique Photo of the Rebbe
The Halachos: Shabbos Chanukah » 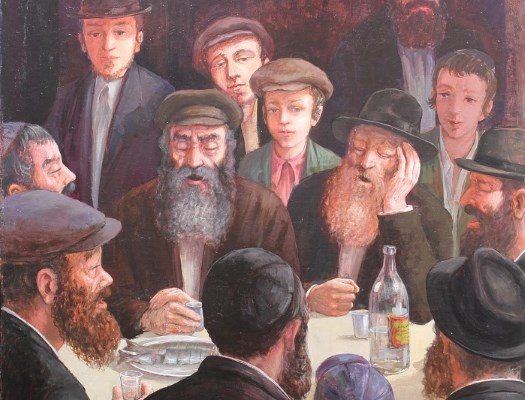 We are told to listen to the Chanukah licht (candles). One of the points the Rebbe stresses is that the purpose of the candles is to light up the darkness outside, until it is extremely bright. Obviously, it also means that one should bring the light of Chassidus into their life. As we see from the following story, this is accomplished through participating in a chassidishe farbrengen.

While the importance of this thought was mentioned by many of the Rebbeim, I chose to bring it from the Rebbe Rashab, who symbolized this aspect of bringing light to the world. The Rebbe Rashab established Tomchei Tmimim for that purpose, and gave its students the mission of being neiros l’ha’ir (candles to illuminate). This story is taken from my notes on the Rebbe Rashab’s biography that I am presently in the process of compiling, b’ezras Hashem.

On Rosh Hashanah of the year 5663 (1902), the Rebbe Rashab began a new hemshech which expounded on the profound concepts of chai b’etzem and chai l’hachayos. On the second night of Sukkos the chassidim sat down for a farbrengen. The noted chossid, the Rashbatz made kiddush on old wine and then said a l’chaim on strong whiskey. He sat for a while deep in thought, and then expressed his thoughts to the other chassidim: “At that maamar [of Rosh Hashanah], I felt [for the first time that the Rebbe Rashab is] Rebbe.”

He was then invited to join the Rebbe’s seudah. During the meal, he said to the Rebbe: “[The Talmud informs us that the court appoints a guardian for young orphans to maintain their father’s estate. However], when the orphan becomes twenty years old, he can manage his father’s estate as he wishes.” He then added, “I believe that your father [the Rebbe Maharash] told you this maamar.”

Some months later, the Rebbe Rashab confided to his son the Frierdiker Rebbe: “For a long time I had a complaint, until I resolved it on erev Rosh Hashanah of this year. When I was at the Ohel of my father the Rebbe Maharash, I said:

“‘Father, I am missing [the benefit] of chassidishe farbrengens. The reason I didn’t attend them is because I didn’t allow myself the time, not chas v’sholom because I felt superior to the other chassidim. Rather, I devoted my time entirely to the study of Chassidus. And you know the intense toil I invested in integrating its teachings within myself. This is what prevented me from spending time participating in chassidishe farbrengens. Therefore, I am requesting that you grant me that benefit as a present.’

“Indeed, my father compensated for that lack, and from that time on, I heard stories and other points from him in the form of nighttime visions.”

“Upon hearing these words, I resolved to no longer ask my father where or when he heard the stories he subsequently began relating to me. Additionally, until then I had been given permission to enter my father’s room after I knocked, even if my father didn’t answer. The reason was because it was possible that my father the Rebbe was in the middle of davening and couldn’t interrupt, so he allowed me to enter and take the papers (or whatever) I was coming for. However, during that year, my father instructed me not to enter his room until he answered my knock.”

While the Rebbe Rashab did not state the reason for this change, the Frierdiker Rebbe stated that he believed it was connected to the above-mentioned point his father had revealed to him. [In other words, the reason he was no longer allowed to enter without explicit permission was because his father may have been having some “visitors” at that time.]

We should note that in a different sichah, the Frierdiker Rebbe mentioned that during that year, the Rebbe Rashab shared some precious thoughts with the chassidim as well. At one farbrengen he said, “When one is sitting in his room and opens up [i.e., learns] something from Likkutei Torah, he can sense Atzmus Ein Sof – the essence of Hashem.”

The Frierdiker Rebbe notes that this statement ignited such excitement among the chassidim that it was recognizable for months.

Rabbi Avtzon is a veteran mechanech and the author of numerous books on the Rebbeim and their chassidim. He is available to farbreng with and enthrall your community about our rich Chassidic heritage, and can be contacted at avtzonbooks@gmail.com

« Weekly Unique Photo of the Rebbe
The Halachos: Shabbos Chanukah »