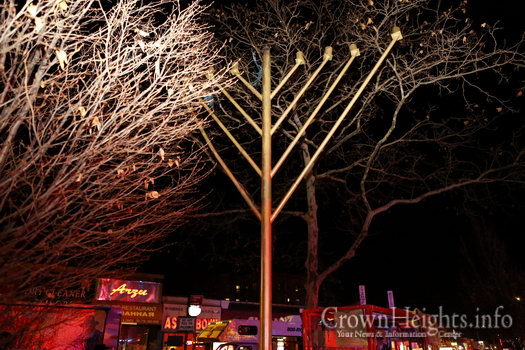 A nine-foot menorah in front of the Zeta Beta Tau fraternity house at Penn State University was vandalized.

The menorah, which was worth several thousand dollars, was knocked over and two branches damaged, late on Thursday night, the student newspaper The Collegian reported. The damage was discovered on Friday morning. The fraternity has shared its security footage with police, who have no suspects, according to the newspaper.

The fraternity raised money this year to purchase the menorah to “celebrate and support the Jewish community,” ZBT president Adam Schwartz, told the student newspaper. ZBT is a traditionally Jewish fraternity.

“This vandalism occurred only a month after the deadliest recorded attack of Jews on United States soil. We share in the feelings of hurt expressed by many members of our community. Today, and every day, we stand united with our Jewish friends, neighbors and colleagues. There is no place for hate in our community. Such actions violate the values to which we must commit ourselves and one another,” the university said in a statement.

The fraternity was scheduled to kindle the first Chanukah lights at its house on Sunday night, together with the Interfraternity Council, Hillel and Chabad.

Last year, four Penn State University students were charged with stealing a 9-foot menorah from the home of the campus Chabad rabbi and leaving it damaged outside the Sigma Alpha Mu fraternity, another traditionally Jewish fraternity.