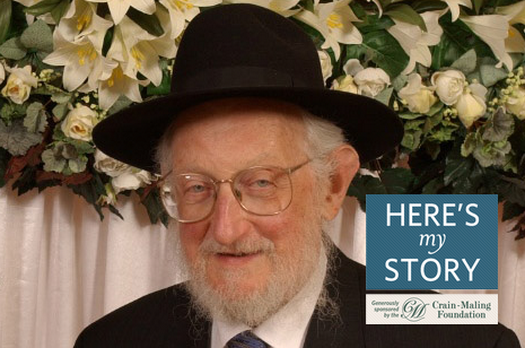 Here’s My Story: Love is the Real Bottom Line

I was born in 1925 in Belarus to a Chabad family – in fact, my father had come from Yekaterinoslav, the town where the Rebbe’s father served as rabbi and where the Rebbe lived as a boy.

When I say the Rebbe, I am speaking about Rabbi Menachem Mendel Schneerson, the last Rebbe of Chabad-Lubavitch. But during my youth, “the Rebbe” meant the Previous Rebbe, Rabbi Yosef Yitzchak Schneersohn who, in 1927, sent our family to Hebron, Israel, where my father went to work as a specialized kosher butcher in charge of deveining.

In August of 1929, the Previous Rebbe visited Jerusalem and, naturally, my father was thrilled to go there to greet him. After a meaningful audience, he asked the Rebbe to bless him that “m’zol zach vider zehn – we should meet again” – and the Rebbe did as he asked.

Upon leaving, my father realized that he had left something behind, so he went back in to get it and, of course, saw the Rebbe again. Realizing this, he asked the Rebbe for a second time to bless him that they should meet again. But the Rebbe declined. Instead, he said, “we are seeing each other now.” My father repeated his request a third time, but the Rebbe declined once more.

The Rebbe must have sensed that they would not see each other again. Indeed, my father returned to Hebron only to be murdered by the Arabs two day later. On August 24, 1929, which was Shabbat, they rampaged through the city, killing some 67 Jews, my father among them.

A year after I arrived, Rabbi Menachem Mendel Schneerson, who was the Previous Rebbe’s son-in-law – who would later become the Rebbe – called me in and suggested that I take a class in kosher slaughter. At first, I was not interested, but then he said, “I knew your whole family in Yekaterinoslav, and they were all kosher butchers, so you have to learn this too.”

I did as he instructed, and then he advised me to start a small business, of slaughtering chickens on Thursdays and delivering them to Jewish homes in time for Shabbat cooking. But the reason he told me to do it was most unusual – he said, “It will give you the opportunity to hear many words of Torah.”

How would I hear these words of Torah? “When you deliver the chickens, the children will be home, and they will want to show off what they had learned in school.”

Indeed, that is exactly what happened. Their simple insights were so inspirational to me that I started writing down what they said in a little notebook that I brought along. I would then report everything to the Rebbe.

From the time that he took over the leadership of Chabad in 1951, the Rebbe guided my every step – whether in my Torah learning, in developing my career, or in dating for marriage. I would update him every few days, and he always had a kind word and guidance to share with me. After one of these conversations, during which the Rebbe gave me invaluable advice in my search for a wife, I became so overwhelmed with gratitude to him that I burst out, “What did I do to merit the Rebbe’s help?”

The Rebbe gave me a sharp look and responded, “A Rebbe or a father doesn’t look for merits when it comes to his students or children; he does whatever has to be done for them. I did what I had to do.”

I think the most important piece of advice that I received from him concerned ahavat Yisrael – how to love your fellow Jew.

On another occasion, he said to me, “The commandment of ahavat Yisrael – loving your fellow Jew – means that when a Jewish man or woman needs something, you try to give it. It doesn’t matter if you know them or not; it doesn’t matter who they are; you give them what they need. That’s ahavat Yisrael.”

This principle became paramount in my business – a butcher shop which I opened on Empire Boulevard in Crown Heights – because the Rebbe told me: “Everybody who comes in should come out with meat for Shabbat, whether they pay or they don’t.”

That was the Rebbe’s decree, and I didn’t ask any questions. I understood that if I lose money this way, I will get it back some other way. What was paramount to me was that Rebbe said to do it like this, so that’s the way it had to be done. And somehow it worked out well for everybody, just as the Rebbe promised.

Let me cite a couple of examples:

One day a young woman came into the shop, saying she had recently gotten married but her husband had no source of income. “What will we eat?” she wondered. I told her, “No problem. Whenever you come to me, you’ll get what you need.”

I had another customer – a woman with many children who was always buying a lot of meat. And then, all of a sudden, she started buying only chicken wings, the cheapest thing in the shop.

I called her and asked her what was going on. She told me that her husband had lost his job, and she had no money. “No problem,” I said to her. “The Rebbe told me that ahavat Yisrael means I should give you whatever you need. When you have the money, you will pay.”

And, in fact, many years later she sent me a check for what she owed.

But, long before she did, I knew that what the Rebbe said was absolutely right – it didn’t cost me money if they didn’t pay, because even if I didn’t get it this way, I got it another way.

Rabbi Shalom Ber Goldshmid (1925-2011) and his late wife Rivka lived in Brooklyn, where he operated a butcher store for many years. He was interviewed in August 2011.