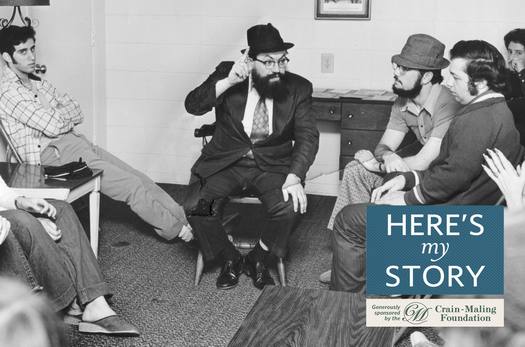 I come from a Lubavitch family going back to my great, great-grandfather who was a disciple of the Mitteler Rebbe, the second Rebbe of Chabad-Lubavitch. In 1930, during the persecution of Jewish leaders by the Soviets, my grandfather and namesake, who was the Rabbi of Leningrad (today’s St. Petersburg), was arrested. He was sent to a gulag in Siberia from which he returned three years later a broken man, and he died in 1933 in Leningrad. I never knew him, and I also never knew my father who was killed during World War Two when my mother was pregnant with me.

After the war, we made it out of Russia via France about the same time as the Rebbe’s mother, Rebbetzin Chana. The Rebbe (before he became the Rebbe) came to Paris to escort her to America, and I recall dancing with the Rebbe as a five-year-old kid, along with the other Russian chasidim.

My mother and I did not go to America however. First, we went to Israel and only years later, in 1958, did we come to America and I enrolled in the Chabad yeshivah in New York.

From the time I started learning in the yeshivah, my relationship with the Rebbe was that of a child to a father or grandfather. Whatever he told me to do, I did. For example, just four years after I arrived in New York, he sent me back to France to study at the Chabad yeshivah in Brunoy, France, in anticipation of a big immigration there of Moroccan youth. The Rebbe knew that they would need a lot of encouragement, so he sent me and five others to accomplish this mission.

That was my first experience as the Rebbe’s emissary. Later, when I was looking for a fixed position, he sent me to Texas and that’s where I went. I really had wanted to go to St. Louis, but the Rebbe felt I was needed more in Texas, and he sent me to Houston where the Orthodox presence was the weakest.

I looked to the Rebbe for guidance in everything, and I recall an instance, after I got married, that I came to see him with my wife to ask a few questions. He answered all of them except one. But later that evening the Rebbe’s secretary came to me with his answer. And only then did I realize that the Rebbe didn’t miss a single thing – he merely did not want to answer that question in front of my wife. He was that sensitive!

In 1973, after I had been in Houston for about a year-and-a-half, I was informed that Zalman Shazar, who had just finished serving as president of Israel, would be passing through town on his way to Mexico. He had a three-hour layover at the airport, and the Jewish Federation wanted the local community leaders to come to greet him.

Since I always checked with the Rebbe on things like this, I called his secretariat in New York, and was told that I should go and remind Mr. Shazar, who had Chabad roots, that this very day on the Hebrew calendar is Gimmel Tammuz – the third day of the Hebrew month of Tammuz – when the Previous Rebbe was freed from Soviet prison. Now this date was at that time not as important in the Chabad calendar as Yud Beis Tammuz – the twelfth day of Tammuz – when the Previous Rebbe returned from exile and was able to rejoin his community, yet I remembered the Rebbe once explaining that Gimmel Tammuz ranks higher as the day the Previous Rebbe’s life was saved. (Years later, this date became even more significant to me because the Rebbe passed away on Gimmel Tammuz.)

So this is what I did. When I arrived, the airport reception room was packed, as everyone who was anyone in Houston was present. Yet, in the crowd, Mr. Shazar made a beeline for me. He identified me from my dress as a Chabad chasid and, addressing me in Yiddish, asked, “How is the Rebbe?”

He invited me to sit next to him, and we began to talk. As instructed, I reminded him that today is Gimmel Tammuz, and I pulled out a bottle of vodka and two little cups so that we could make a L’chaim in honor of the day. At that he got very emotional, raised the cup and said, “L’chaim! To the Rebbe’s health!”

He then told me that on the way back from his trip to Mexico, he would be passing through New York, and he asked me to please arrange a meeting with the Rebbe, which I did.

He had an audience with the Rebbe a week later, during the celebrations of Yud Beis Tammuz, and I also came. During their meeting, I was distinguished as “the young man from Houston” (I was then thirty years old), and the Rebbe quipped to Mr. Shazar that “Houston is the gateway to heaven,” referring to the fact that the Kennedy space center, NASA’s primary launch center is located there. It was a very special occasion.

A few years later, in the 1980s, I faced a very big health problem in Texas, the details of which I cannot get into. I had come to see someone in New York who might solve this problem, but he only asked me, “Did you bring this up to the Rebbe?” I said, “Yes, I wrote to the Rebbe about it.”

“Did he answer you?” he asked. All I could say was, “Not yet.” He was puzzled, “Are you sure the Rebbe knows you? Such a big problem you have, and he doesn’t answer you?!” I got a little irritated and said, “Yes, of course, he knows me!” But I couldn’t help wondering, “Why didn’t the Rebbe answer me?”

Following this meeting, with these thoughts swirling through my mind, I came to the Rebbe’s farbrengen. There I was, amid hundreds of people, yet as if he was reading my mind, the Rebbe called out to me to make l’chaim and said, “Throw away the negativity; you should be happy and content.” The others present were surprised that I earned this distinction. And, the next morning, the answer I had been waiting for arrived: The Rebbe told me exactly where to go, what to do and what not to do.

I called up that man who had questioned my relationship to the Rebbe and told him what happened – he was astonished. And then, when I followed the Rebbe’s instructions, the problem solved itself.

Since 1972, Rabbi Shimon Lazaroff has lived in Houston, Texas, where he serves as the regional director of Chabad of Texas. He was interviewed in December, 2008.