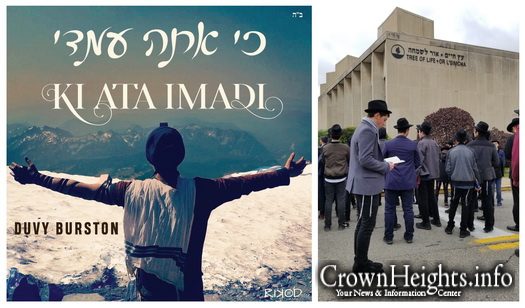 Duvy Burston of Orange County, currently a high school student at Yeshiva Schools of Pittsburgh, released an original song in response to the Synagogue massacre that took place under a mile from his yeshiva.

“I am sharing this new song with the world and dedicating this piece to the 11 souls gunned down at the Tree of Life Synagogue, under a mile from where I, too, was praying,” says 16-year-old Duvy Burston.

On Saturday, October 27th, Duvy, headed to Synagogue with his friends as he does each Saturday. “Shortly after we arrived we heard sirens and were told not to leave the building,” he recounts. “We were on lock down and we knew something serious was happening.” The beauty and tranquility of Shabbat services transformed to horror and shock as Duvy and his classmates learned of the Synagogue shooting less than a mile from where they were praying, in the same Pittsburgh neighborhood of Squirrel Hill.

Duvy, who is also a passionate musician and song-writer, responded to this massacre by releasing a song, titled “Ki Ata Imadi,” which translates as “For You (G-d) are with me.” The lyrics, from the well-known Psalms 23, is often said in times of distress, and is also part of the liturgy of the Sabbath prayers, which were interrupted with screams and gunshots at the Tree of Life Synagogue . “The Lord is My Shepard, I shall not want . . Even when I walk in the valley of darkness, I will fear no evil for You are with me.”

Yeshiva Schools of Pittsburgh encouraged students to respond to the senseless hate – with love and support for the community. Students attended community wide vigils, offering participants to add in doing a mitzvah in honor of the victims. The boys also recited afternoon prayers and sang songs of comfort at the Tree of Life Synagogue, where the shooting occurred.