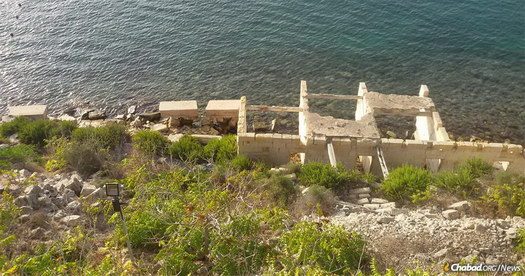 A Mikvah for Malta

Since Phoenician traders landed on its breathtaking shores nearly 3,000 years ago, the 122-square-mile cluster of Mediterranean islands that make up the European nation of Malta has had a rich and varied Jewish past.

Jewish exiles landed on its shores in the second century, and the famous 13th-century Kabbalist Avraham Abulafia spent the final days of his life on one of its lesser islands. By medieval times, one-third of its then capital, Mdina (no “e”), was Jewish.

Today, tourists and locals can dine in an Israeli-style kosher restaurant and visit historic sites with names like “Jews’ Square,” the “Jewish Fountain,” “Samson’s Valley” and the “Old Jewish Silk Market.” They can view menorahs etched into fourth- and fifth-century ancient Jewish tombs, and join in a public Passover seder.

But ask anyone where the mikvah (ritual bath) is, and many will draw a blank. Some may know that there has been a temporary one of spare description in a rented garage for a number of years; others may point to the sea. Both would be right.

Until about 70 years ago, Malta and its smaller islands of Gozo and Comino accommodated mikvah-observant Jews with specially built stone structures near the shoreline in its current capital city of Valletta, providing privacy for before and after immersion. But those structures fell into disrepair, and the Jewish population—down to about 200 out of a total population of some 430,000 today, plus Jewish travelers—has gone wanting for a permanent facility for the purification ritual.

By Jewish law, a married woman must immerse after a monthly separation period in a kosher mikvah (which can be fulfilled in certain circumstances if one is willing to be exposed to the elements by immersion in a natural body of water, such as an ocean or sea) before resuming relations with her husband.

To fill the gap, Rabbi Chaim and Chaya Mushka Segal, Chabad-Lubavitch emissaries to the islands since 2012—with support from Malta’s Jewish community president, Reuven Ohayon—are building the country’s first luxurious mikvah and preparation rooms. The site is in Sliema, about 15 minutes from the old privacy structures in Valletta and fit for a king—or more properly, for a queen.

“If we are lucky, we will have the mikvah by Pesach,” says Chaya Mushka Segal, who sometimes flies two hours back and forth to Israel to fulfill the observance. “It won’t be too soon as there are women here from places like Australia, South Africa and Israel who kept the tradition where they lived and are waiting to resume it in style.”

A crowdfunding campaign during the High Holidays yielded significant revenue for the project—some $128,000. But between the balance still needed and the relaxed style of the Maltese construction teams, the project awaits completion.

The mikvah is planned for the main island, Malta (which bears the same name as the nation), all of 17 miles long and nine miles wide. Located 50 miles south of the Italian island of Sicily, Malta—formerly under the rule of the Spanish monarchy along with Sicily—was emptied of most of its Jewry in 1492 by Spain’s expulsion edict. It was briefly taken over by Napoleon in 1798 until Britain wrestled it from French hands with the help of a blockade in 1800. In 1814, Malta officially became a British colony until declaring its independence in 1964. Before and during the Holocaust, the Jewish population began to climb again, as Malta was the only European nation that didn’t require an entrance visa.

The mikvah project is the latest focus of the couple, who as part of the country’s Jewish comeback, got immediately to work six years ago bolstering Jewish spiritual life and activities began by a previously established Jewish community under the direction of Ohayon. Ohayon, who took over as Jewish community president from the previous community elder, his late father Avraham, wears many hats as tender of the cemeteries, synagogue leader and former ritual slaughterer until kosher meat began to be imported there. Now, he is also helping spearhead the new mikvah.

The Segals say the old and new guard communities work well together on many fronts, including the ritual-bath project.

In the successful online funding campaign for the project during the recent holidays, Ohayon is shown pitching the audience with the words: “I encourage people to take part in this project because building a mikvah is like building the Third [Holy] Temple.”

A couple who apparently enjoyed a Shabbat meal with the Segals recently, contributed $250 to the project, chiming in on the online crowdfunding forum: “Rabbi and Rabbanit Segal. Keep up your great work. We really enjoyed Shabbat.”

The Israeli couple’s popular and sole Maltese kosher restaurant, called “L’Chaim,” features many Israeli dishes, and doubles as a weekday eatery for locals and travelers, and a destination for Shabbat and holiday meals.

Friday-night services are held in the adjoining Chabad House, while on Shabbat day, Rabbi Segal walks 35 minutes to join Ohayon in a well-established community synagogue. “We are one with the community,” says Chaya Mushka Segal. “Whatever they had before we came, we kept and added more where needed. They do the second night of Simchat Torah, and we do the first.”

“With all of the available activity and the attraction of a growing business climate,” says the Chabad couple, who have been growing their own family as the parents of six children, “the community is getting bigger, and we are here to encourage and keep up with that growth.”