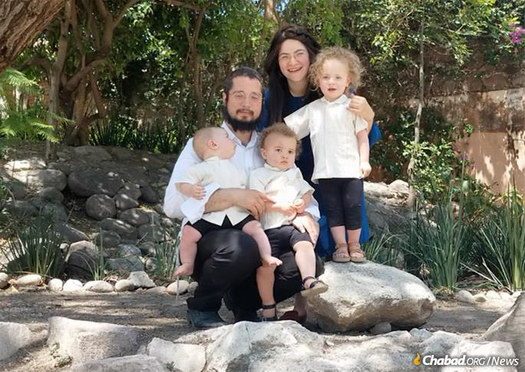 In November, Rabbi Daniel and Raizel Huebner will move with their three children from New Jersey to San Miguel de Allende, Mexico, to run a Chabad center. They’ll be taking with them a traveling Torah dedicated by Rabbi Tuvia Teldon, regional director of Lubavitch of Long Island, and his wife, Chaya, in honor of their son Boruch, who passed away 27 years ago at the age of 13 from complications related to cystic fibrosis.

Rabbi Teldon’s father, Gerald Getzel Teldon, 94, lives in San Miguel, which is estimated to have up to 4,000 Jews spending time in the area every winter. For the Teldons, the Torah has been a project borne out of love. The couple started working on writing a Torah in Boruch’s memory a few years ago. The project didn’t come to fruition right away, but for her upcoming milestone birthday this year, Chaya Teldon was determined to see it completed.

Starting late this summer, she worked on fundraising, asking people to partner with her in honor of her birthday. The couple set out to refurbish a 70-year-old Torah. “I feel it’s beautiful, the longevity of this Torah,” says Chaya Teldon. On Sunday, a local scribe filled in the last 100 letters. They completed the Torah at their home and then, with police escorts, marched the Torah to the Chabad center about a block away.

Their son Mendel Teldon, who with his wife, Brocha, co-directs the Chabad of Mid Suffolk in Commack, N.Y., ran the program. Four of the couple’s other children came in to attend the celebration. There was a chuppah, music and a ceremony, which most of the 200 people in attendance had never seen, complete with dancing. “There’s a lot of excitement, especially for those people who go back many years, who knew my son, they have a special connection and feel a very emotional tie to the situation,” says Chaya Teldon.

On a broader level, every Jewish experience they can offer to their community rounds out their Jewish experience, she says. “It’s definitely a unique mitzvah,” she says, “and one that many people are not aware of, as far as writing a Torah scroll, and so it adds not only to their knowledge base, but also I hope will leave a strong impression on their neshamah [soul].”

The traveling Torah is set to be on loan to fledgling Jewish communities around the world, starting with the Huebners. The Chabad center will be based out of the Huebners’ house near the center of town, where he says he hopes to have a minyan in short order and to be able to share the Torah with the community.

“I think that it’s a great initiative to have the traveling Torah to help out the communities that don’t have their own, and I find it very helpful,” says Huebner. “We’re very appreciative of all the effort the Teldons put into helping us get started with our Chabad House, and we are very grateful to have been chosen as the first stop for this unique traveling Torah.”

The ceremony was a meaningful nod, says Chaya Teldon, to her son’s legacy. “People are saying Boruch would so get a kick out of this; he would so appreciate everybody dancing and having this mitzvah,” she says. “He was a very humble kid, but he would just be so appreciative.”