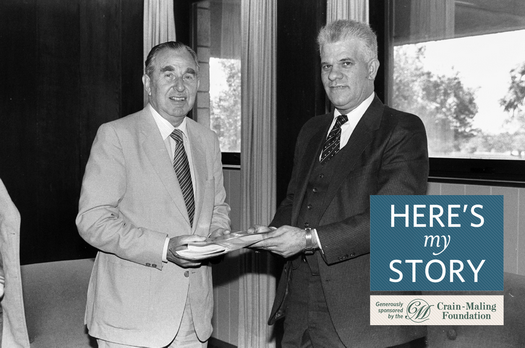 Most tourists to Jerusalem know my family name – Mandelbaum – because they have visited the site where my family’s home once stood. It had been destroyed in 1948 during Israel’s War of Independence, and a gate was erected on its site. During the nineteen years that Jerusalem was divided, in order to proceed from one part (the Israeli part) to the other part (occupied by Jordan), everyone had to pass through what was called – after the ruin of our home – the Mandelbaum Gate. When Jerusalem was reunited after the Six-Day War, the Mandelbaum Gate was dismantled, but the site is part of Jerusalem’s history now and most tourists are taken to see it.

As a teenager, I served in the Israeli army but my service was cut short due to injury. For a time I studied in yeshivah, but ultimately I decided to enroll in university in order to study economy.

Why economy? Partly because I saw my family’s financial situation plummet – we were one of the wealthiest families in Jerusalem before the State of Israel was founded, but during the War of Independence, we lost almost everything and became refugees. So I saw economic issues from a personal point of view.

I studied at Hebrew University, where I received a bachelor’s and a master’s degree, but after I got married and started a family, I didn’t have the financial resources to continue on to a doctorate. Then one day I read about a US State Department grant program for economics students from developing countries.

Unbelievably, from among some two hundred Israelis who applied, I was the one chosen. When I asked why I was accepted, I was told that every other applicant tried to impress the selection committee with their knowledge, but I was the only one who said I didn’t know and wanted to learn.

The program of study was at Vanderbilt University in Nashville, Tennessee; it was a very prestigious program with candidates carefully chosen by the State Department. It was an elite group and studying with them gave me extensive connections throughout the world, as all the graduates achieved very high positions.

During my stay in Nashville, I met Rabbi Zalman Posner, the Chabad emissary there. As a religious Jew, I gravitated to his synagogue and, before long, my wife was teaching in the Chabad school, while I was serving as cantor for Shabbat and the High Holidays. Through my association with Chabad, I came to admire the movement for its outreach work with disenfranchised Jews, and especially the Rebbe’s leadership in this regard.

I had the privilege of meeting the Rebbe personally in 1968, when I sought his counsel concerning my doctoral thesis. By this time I had finished my studies at Vanderbilt and returned to Israel, where I worked for the Ministry of Economy and Industry. However, before I would be granted the Ph.D. degree, I had to return to Vanderbilt to present evidence substantiating my doctoral thesis – this is called a thesis defense – before a committee of six professors.

The problem was that on the committee sat a Jewish professor who, unbelievably, was anti-Israel. This professor would not come to hear my thesis defense because I was Israeli, and my thesis topic was on the Israeli economy. As a result, the committee meetings were continuously being postponed. Meanwhile, I had traveled from Israel, leaving my family and job behind, and was sitting in Nashville with nothing to do but wait in frustration. It also occurred to me that even if this professor showed up for the committee meeting, he’d probably rule against me, in which case I would not receive my degree, and all my work would be in vain.

That is when I decided that intervention from a higher source was needed, and I came to see the Rebbe and get his blessing to overcome this obstacle.

The Rebbe gave me his blessing. I do not remember his exact words today, but I do remember that I began shaking while he spoke, and that I was overwhelmed with certainty that I would prevail.

During the audience, the Rebbe questioned me extensively about my thesis, which centered on the need to develop Israel’s industry and what measures the government had to take in this regard. “Israel’s interest rate is very high,” I told the Rebbe. “My thesis calls for lowering the rate and instituting tax benefits in order to encourage international companies to invest in our industry.”

The Rebbe disagreed with this. He said, “Serious investors are not looking for cheap loans. They have good relationships with banks and can borrow at low rates at any time without the government’s help. But while cheap loans would not be enough of an incentive for them, outright grants would be.”

I saw what a great idea this was and added it to my thesis immediately. And when I returned to Israel, I influenced members of the Knesset to pass a bill to that effect. This benefited the economy greatly, as large companies – Intel for example – opened offices in Israel, offering employment to thousands of Israeli workers.

The Rebbe gave me other advice that proved invaluable. He had the amazing foresight to suggest that Israel’s economy should be founded on Jewish intelligence. He said, “Generally, Jews are better at working with their heads. So rather than building up the manufacturing industry, try to encourage the brainpower industry.” He was absolutely right and as we all know, hi-tech has made Israel an international force to contend with.

He said another thing that I will never forget. I had mentioned to him the Israeli government’s quandary concerning how much to intervene in the economy – because if the government provided too much assistance, perhaps people would rush to start up unsuitable industries that would not help the economic structure. To that the Rebbe said, “Don’t forget that G-d keeps His eyes on the Land at all times. There is Divine supervision at work and in the end, what the government does will bring about only a positive outcome in this regard.”

Finally, before I left, the Rebbe advised me that the solution to my problem at the university would come “from above,” which I took to mean that it would come from Heaven and that I should pray for a positive response to my doctoral thesis.

After the audience, I returned to Nashville and waited for the committee to convene, but still nothing happened. And then my brother suggested that I should inform the dean of the university’s economics department of what was going on. I was very reluctant to take this step. Going over the head of a professor to the administration is frowned upon in academia and can easily backfire. But suddenly, it hit me – this is what the Rebbe must have meant by “above.”

So, encouraged by the Rebbe’s words, I went “above.” When the dean heard about the delay, he ordered the committee to meet and decreed that if the anti-Israel professor refused to participate, he should be removed from the committee.

That’s what happened. The committee tested me for fifteen minutes and pronounced my thesis excellent. To this day, I credit the Rebbe’s blessing for this successful outcome which determined my entire future, and I am most grateful for his advice which I have made every effort to follow in my career as an Israeli economist.

Professor Moshe Mandelbaum served as Governor of the Bank of Israel during the 1980s when he helped develop the Economic Stabilization Plan. He also taught economics at Bar Ilan University and Netanya College, and presently serves as Dean of Ashkelon College. He was interviewed in Jerusalem in March of 2016. This story first appeared in the My Story book.