« Regional Conference of Shluchim to Asia Concludes
Video: If Good is Good can Better be Better? » 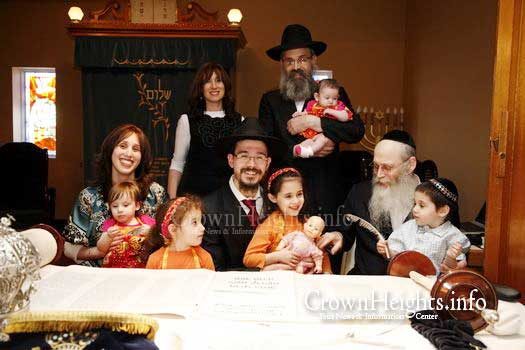 Rabbi Moshe Gourarie, director of Chabad of Toms River, with his family at a ceremony completing a new Sefer Torah in 2009. Archive Photo.

A federal district just faulted the Township of Toms River, saying they broke the law in denying a religious use variance to Chabad of Toms River, granting the center permission to operate in the residential home and awarded them a judgment against the township for $122,000.

Chabad Jewish Center can continue to operate in a home on Church Road after a federal judge ruled that Toms River wrongly required the Chabad to acquire a variance to operate in a residential zone.

U.S. District Court Judge Freda L. Wolfson said the township’s Board of Adjustment violated the federal Religious Land Use and Institutionalized Persons Act, the Fair Housing Act, and the U.S. Constitution in  barring Rabbi Moshe Gourarie from operating the Chabad without a variance.

“I’d just like to say that our clients are very pleased with the result and look forward to many years of a productive relationship with the community in Toms River,” said Roman P. Storzer, of Storzer & Greene in New York and Washington, D.C., who represents the Chabad Jewish Center.

Wolfson also required Toms River to pay $122,500 to Gourarie, who operates the Chabad in his house. She also dismissed several pending zoning violations that the township had filed against Gourarie.

The judge’s ruling concludes a lengthy dispute that inflamed tensions between some longtime Toms River residents and Gourarie, who began operating the Chabad from his home in 2011.

Gourarie’s lawsuit, filed in March 2016, claimed the Chabad became a target for “anti-Semitic hostility” in spite of its “negligible land use effect on the local community and its existence at this location and another residential home in Toms River for 12 years without negative impacts.”

The suit, citing both state and federal civil rights protections, alleged the center had fallen victim to religious discrimination and arbitrary treatment.

The Religious Land Use Act prohibits governmental entities from implementing land-use regulations that impose “a substantial burden on the religious exercise of a person, including a religious assembly or institution,” unless the government can demonstrate that the regulations further “a compelling government interest.”

« Regional Conference of Shluchim to Asia Concludes
Video: If Good is Good can Better be Better? »