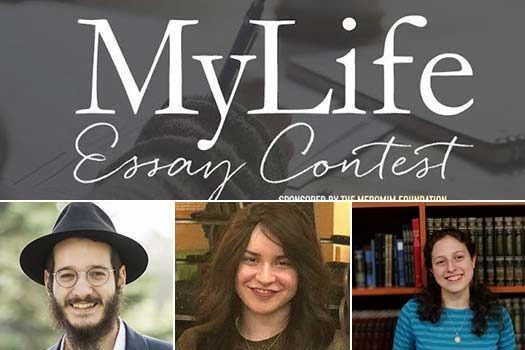 The 1st place winner of $10,000 was Leibel Gniwisch, a 24-year-old teacher at Lamplighters Yeshiva in Brooklyn, New York. Chana Hendel, of Athens, Greece won the 2nd place $3,600 prize. Shterny Fogelman of Brooklyn, New York won the 3rd place $1,000 prize. And the special $500 student prize went to Menachem Mendel Yeshayahu of Haifa, Israel. Due to the strong of student participation, an added bonus student prize was awarded to Yakir Havin of Wilkes Barre, PA. Visit meaningfullife.com/contest to read the winning essays.

Rabbi Ephraim Merovitch, director of the contest, explained the incredible experience of the entire process, from the submission stage to the evaluation stage to the final announcement of the winners.

The much anticipated announcement came after weeks of intense deliberations by a panel of esteemed judges, who used a rigorous grading system to select the winners out of the hundreds of essays submitted in this year’s contest.

Hailing from every continent around the world, the contestants spanned a wide variety of ages and backgrounds, attesting to the broad appeal of the MyLife: Chassidus Applied Essay Contest. Submissions arrived from men and women of the entire social spectrum, including rabbis, laymen, shluchim, educators, professors, yeshiva bochurim, seminary graduates, and high school students.

“What better way to honor and celebrate the Rebbe’s birthday than to have hundreds of people and thousands of readers invested in learning and applying Chassidus to contemporary life,” said Rabbi Jacobson.

The first place winner Leibel Gniwisch is a middle school melamed who teaches Mishna and Halacha at Lamplighters Yeshiva in Crown Heights. His essay was an outgrowth of his passion, and daily challenge, to discover teaching methods that will offer his students a practical and relevant message which will inspire them to live invigorated lives. “Our task, as the next generation of educators and leaders, is to truly present Chassidus so that our children be informed by its message and influenced by its beauty,” said Leibel Gniwisch.

“As a shliach and Magid Shiur in yeshivos, I noticed a pattern where bochurim struggled with self-image and self-acceptance. This attitude built big steel barriers between them and their peers, their mashpiim and, ultimately, themselves. Boruch Hashem there are so many exceptional teachers in our community who truly “get” Chassidus and have the ability to impart its complexities in an authentic yet pragmatic fashion. Among my inspirations are Rabbis Shais Taub, Yossi and Simon Jacobson, Osher Farkash, Manis Friedman, Yossi Paltiel, Zalman Kaplan, and Meir Chaim Posner. It was in conversation with them that the seeds of these ideas were developed and what inspired me to write. I hope to continue translating Chassidus into the language of today and be meifitz its wellsprings chutza.”

Rabbi Jacobson explained that the auspicious days leading to Yud Alef Nissan is a “most fitting time for the culmination of this extraordinary contest, driven by our collective mission and quest to disseminate Chassidus. The MyLife: Chassidus Applied Essay Contest has proven to encourage hundreds of men and women to study and apply Chassidus to their, and our, personal lives. The contest has created an unprecedented surge and excitement in the core mission of the Rebbeim: hafotzas hamayonos chutzah. Surely the Rebbe is deriving much nachas from the study and the propagation of Chassidus that this contest has brought about.”

The MyLife Essay Contest Team is proud to showcase some of the amazing talent that has emerged through this year’s contest! The essays will be published and reviewed on the weekly MyLife broadcast over the coming weeks and months.

The MyLife: Chassidus Applied Essay Contest is a project of The Meaningful Life Center, and graciously sponsored by the Meromim Foundation. MLC reports that there will be exciting new follow-ups to the Essay Contest. To stay tuned for announcements, read the winning essays, and to find out about next year’s contest, subscribe to the MyLife mailing list and follow MyLife on Facebook.