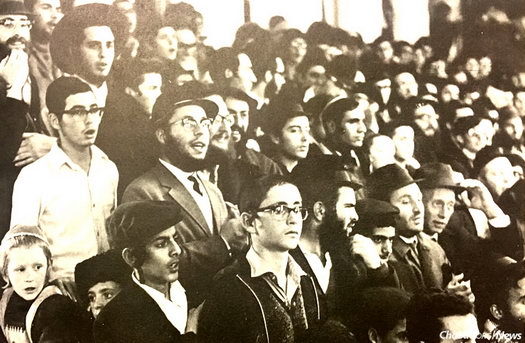 The central Yud Tes Kislev farbrengen in Kfar Chabad, Israel, drew thousands, including high-profile dignitaries from a cross spectrum of Israeli society. The event was also broadcast on the radio and surreptitiously listened to by Jews in the Soviet Union.

For more than 200 years in Chabad-Lubavitch communities around the world—in the best of circumstances and the worst—these early winter days have been dedicated to preparing for the Chassidic holiday of Yud Tes Kislev, the 19th day of the Hebrew month of Kislev (which in 2017 falls on Dec. 6 and into Dec. 7).

Take, for example, Rabbi Berel Levertov. According to his NKVD file, in 1945 he began preparing for Moscow’s 19th of Kislev farbrengen gathering ahead of time. On Nov. 30, 1945, a Soviet secret police officer filed this report:

A week before the Chassidic holiday in Kislev, Levertov was already preparing great festivities, collecting money for vodka and food. He even approached Mr. Kushin, the Shul’s administrator, and our informer, asking them to contribute their share. Levertov organized the entire event. He led a ritual meal after the prayers for close to two hours with many Chassidim in attendance . . .

The NKVD, one of a number of precursors to the KGB, knew how significant the holiday was for the Chassidim, and they kept track. Yud Tes Kislev has for more than two centuries held a place of unparalleled importance on the Chassidic calendar—a date referred to as the Rosh Hashanah, the New Year of Chassidism. It was on this date in 1798 that Rabbi Schneur Zalman of Liadi, the founder of the Chabad-Lubavitch movement, was freed from his imprisonment in czarist Russia. More than a personal liberation, it was considered a watershed event in the history of Chassidism, heralding a new era in the revelation of the “inner soul” of Torah.

And so, in the heart of Stalin’s Moscow, Levertov went about preparing for the festive meal to be held at the little synagogue in the city’s Marina Roscha neighborhood. The NKVD officer, named Fuchs, notes that the synagogue’s event wasn’t the only one taking place in Moscow:

. . . On the night of the holiday, the Chassidim gathered in the home of Gildenblatt. Levertov was there with many others. [Our] informer could not attend due to a doctor’s appointment.

Levertov’s activism to sustain Jewish life in post-war Stalinist Russia led to his arrest less than two years later. Sentenced to 10 years in the Gulag by Soviet authorities, he died in the Dubrovlag labor camp in Russia’s frozen Mordovia region in 1949, physically tortured and horrifically beaten, but spiritually free. As was his goal, Moscow’s secret 19 Kislev farbrengens lived on for the duration of Soviet power.

‘That Was Our Education’

Following Stalin’s death in 1953, the noose that hung around Soviet Jewry’s neck loosened, as it did for the populace at large. But the fear—of social ostracization, job loss, possible imprisonment, of one’s children being kicked out of school or ending up punished in a psychiatric asylum—never went away.

That’s why the Chassidic children who grew up in the Moscow of the 1950s and ’60s remember their farbrengens occurring only in secret, always in private homes, and changing places year after year. With Moscow’s three official synagogues full of government informants (stukatche in Russian slang), attending a Chassidic gathering on such a noted day at any synagogue was out of the question for younger people, who ostensibly had jobs, careers and futures. Those were for the elderly, who by that point had little to lose.

Rabbi Yitzchak Hazan is director of Chabad of Rome, Italy. He grew up in Bolshevo, a neighborhood on the outskirts of Moscow, and one of the places he remembers going for the annual 19 Kislev gathering was to the home of his cousin, Rabbi Yisroel Friedman, a follower of the Boyaner Chassidic dynasty who lived in the Perlovka neighborhood. Friedman’s father, Rabbi AvrahamFriedman, had been arrested in Odessa in 1938 in the midst of the Great Terror and shot shortly thereafter. Like most of Stalin’s millions of victims, the date of the martyred rabbi’s execution was never released; therefore, his son did not know his father’s true yahrtzeit.

“He would make a farbrengen in his house on 19 Kislev and mark his father’s yahrtzeit then,” remembers Hazan, who left Russia with his family as a 14-year-old boy in 1966. “I think the main reason was that if it was discovered, he could say the gathering was in memory of his father and not in honor of Yud Tes Kislev.”

The Friedman family are descendants of Rabbi Dovber, the Maggid of Mezritch, whose anniversary of passing is also marked on the 19th of Kislev. It’s for this reason as well that Yisroel Friedman marked his father’s unknown yahrtzeit on this date. Recently uncovered KGB files in Odessa show that he was actually killed on 2 Nissan.

It was a relatively sizeable Chabad Chassidic community that lived spread throughout Moscow during those years, and Hazan recalls them gathering as often as they could: For melaveh malkahmeals at the conclusion of Shabbat, weddings or other dates on the Chassidic calendar.

“Any occasion was a reason for Chassidim to gather,” says Hazan. “By that point, many of us were forced to go to Soviet schools, so the farbrengens were also a central part of the Jewish education of the children. At a melaveh malkah, we would hear stories of the Baal Shem Tov, we’d sing Jewish songs; that was our education.”

But the 19th of Kislev always stood out. Hazan remembers his mother preparing buckwheat kasha and other special foods for the holiday, and a sense that a special day was upon them. And then there was the massive radio the family would gather around.

“My father was a very pious Chassidic Jew, so we never had a radio. For him, it was like a television, completely unkosher to have at home,” says Hazan’s younger brother, Rabbi Avraham Chazan, today a Chabad emissary in Lod, Israel. “What did we need it for? To listen to the Communists?

“Then one day my father comes home with this huge radio; it was like the size of a refrigerator. We were all shocked when he brought it in.”

Soon enough, the children found out. Chazan’s father had discovered that Israel’s international radio station, Kol Zion Le Goleh, regularly broadcasted Rabbi NochumGoldschmidt’s Yiddish-language classes on Tanya, the foundational text of Chabad philosophy penned by Rabbi Schneur Zalman of Liadi. In came a radio. The Soviets tried jamming the broadcasts, and it was sometimes difficult to hear the program because of that, but listen they did. On Yud Tes Kislev, the station would broadcast the central farbrengen held in Kfar Chabad, Israel—a massive event attended by a who’s who of Israel’s political and societal leaders—and the Chazan family would sit around the radio and listen to the special songs, the speeches and the Chassidic discourse given over by the same Rabbi Nochum Goldschmidt.

“My father wanted us to listen to the program,” remembers the younger Chazan. “That’s how we learned the song Padah BeShalom Nafshi and many other niggunim.”

Yet an actual farbrengen still had to be attended, and in Moscow, which can take hours to cross, especially using public transportation, there were multiple Chassidic gatherings taking place on that auspicious date. Another location was the home of Reb Chanoch Henich Rapoport. It was there that Rabbi Yitzchak Hazan recalls seeing something for the first time: A newly published Jewish book, a sefer. But not just any book—it was a Likutei Sichos, an early volume of published talks of the Lubavitcher Rebbe, Rabbi Menachem M. Schneerson, of righteous memory.

“One Yud Tes Kislev, we came to him and he had this Likutei Sichos,” says Hazan. “I remember him showing it to us; it was like a diamond. The rest of the night the men were totally immersed in discussing the contents of the Rebbe’s talks.”

It wasn’t just the uniqueness of holding the Rebbe’s talks that made an impression on Hazan, but the fact that he had never seen a new print of anything containing words of Torah. Any edition of the Talmud or Chumash had to be from before the revolution, and the books the Hazan children were using were that age. This volume was apparently smuggled in by staff of the Israeli embassy—the Soviet Union broke off diplomatic relations with Israel following the Six-Day War in 1967—who would leave Jewish materials every week at Moscow’s official synagogues.

Reb Henich Rapoport was, in the words of Rabbi Avraham Chazan, “a real fiery Chassid. He could also make a nice l’chaim,and when he came to our home, we knew it was going to be a joyous time.” The return visit to his home was an experience the children remembered well, too.

Rapoport’s joyful demeanor came despite himself having served eight years in Stalin’s labor camps. Born near Kiev, Rapoport studied in underground Lubavitcher yeshivahs in Berdichev, Klintsy, and Zhitomir, before going to Kursk in 1938 as a 17-year-old to head a new branch of the secret yeshivah there. It took the authorities two years to catch up with him, eventually arresting him and another student while on the run in Moscow in 1941. He was released in 1949.

A Yud Tes Kislev farbrengendid not occur at the Rapoport home every year, for security reasons, but did take place more than once. Although a man who had seen much during his life, the elder Rapoport, says his son, was not the main speaker at the farbrengen, always ceding the floor to the elder Chabad statesmen who would grace his table—men like Reb Schneur Pinsky, Reb Leizer Gurevitch and the rabbi of the nearby suburb of Malakhovka, Rav Yehuda Kulasher.

“They would always retell the story of the arrest and liberation of the Alter Rebbe,” says Rapoport, referring to Rabbi Schneur Zalman of Liadi by his commonly used title. Each year, someone would also make a traditional siyum on the Tanya, marking the conclusion of the book’s study over the course of the year. Traditionally, a farbrengen is not only a time to reflect on past events but an opportunity to make positive resolutions for the future, which is what they did.

“I remember them once talking about the mikvah in the central synagogue at Archipova [Moscow’s one officially sanctioned mikvah], that it was in bad condition and needed to be fixed immediately,” recalls Rapoport. “Another time they spoke about the need for the older religious Jews to become more involved in teaching the younger ones.”

The crowds that gathered there for those late-night farbrengenswere not large—five, 10, maybe a maximum of 20 people. Rapoport grew up in a home which they initially shared with a neighbor (the neighbor actually lived in one of the rooms of their home), and so Chassidim had to be more careful not to make noise. While a knock on the door by police did not mean a death or even a prison sentence, some unpleasantness, to put it mildly, could be expected.

“In a way, it was easier to gather after we moved into a newer apartment in a building,” he says. “Neighbors didn’t notice anything because in Russia, it’s not a big deal for a group of people to get together and drink loudly.”

Reflecting back on the scenes he witnessed nearly 50 years ago, Rabbi Avraham Chazan says that while he may not recall the details of what the older men discussed at those hidden farbrengens, he feels their impact. “I remember the niggunim, the l’chaim, them arguing about a fine point in Chassidus. The Chassidic spirit is something we all got then. I still feel it today.”

For information about a 19 Kislev gathering near you, find and contact your local Chabad-Lubavitch center here.