The Chabad Lubavitch community has taken a historic step forward in combating child abuse, child sexual abuse and abuse of adults. A prestigious group of international Lubavitch Rabbinical leaders, many who are Rabbinical Judges, have signed a proclamation addressing abuse in the Orthodox Jewish community.

The proclamation gives reason for the necessity of this document, referencing the multiple deaths due to drug overdoses and suicides over the past year alone in Jewish communities.  It reads, “… the existence of child sexual abuse and other forms of child abuse which occurs in some of our communities, resulting in a number of tragic suicides as well as other physical, emotional, psychological, and spiritual consequences.”

Exclusive to this petition is the inclusion of abuse of adults, which includes but is not limited to domestic abuse, elder abuse, and abuse of the disabled.

Aside from the secular mandate, the Torah obligation for every individual to report abuse immediately and directly to the civil authorities is critical. The two Bible passages referenced in this proclamation are, “Do not stand by while your fellow’s blood is spilled” (Leviticus 19:16) “…and he is a witness- either he saw or he knew- if he does not testify, he shall bear his iniquity” (Leviticus 5:1).

The release of the proclamation coincides with the Jewish High Holidays, a time for introspection and rectifying misdeeds on a communal and personal level. The Rabbinical leaders express regret, saying, “We recognize that in light of past experiences our communities could have responded in more responsible and sensitive ways to help victims and hold perpetrators accountable.”

The aforementioned Rabbis are clear in the requirement for allegations of abuse and neglect to be immediately and directly submitted to secular authorities without necessitating prior Rabbinic or professional consultation. These decisors of halacha state unequivocally, “The reporting of reasonable suspicions of all forms of child and adult abuse and neglect directly and immediately to the civil authorities is a requirement of Jewish law. There is no need to seek rabbinic approval prior to reporting.”

Michael Salamon, PhD, a clinical psychologist and noted expert in this field, asserts, “The longer it takes to report the more time the abuser has to keep abusing and creating alibis. Only trained investigators with proper professional team support (e.g. police, medical, etc.) can investigate. Asking anyone else about reporting just delays or confounds or completely derails a proper investigation. That is why so many abusers have been able to move to different communities and continue to abuse.”

The concept of consulting with a Rabbi prior to reporting has no basis in halacha (Jewish law) but rather can be a method of silencing the victims. Furthermore, Dr. Salamon asserts that “Therapists can lose their license if they attempt to ‘investigate.’ Be aware that the overwhelming majority of reports – in the vicinity of 95%, or more – are accurate. It takes a lot for someone to finally come forward and tell someone that they have been abused.” The fear that without Rabbis sifting through allegations there would be a high percentage of false allegations is similarly incorrect. James A. Cohen, associate professor of law at Fordham University School of Law, warns, “Encouraging delay in reporting a crime, particularly a crime against a child, is obstructing justice.”

Similarly, in a recent email, Crown Heights Rabbinical leaders Rabbis Yosef Braun and Aharon Yaakov Schweiindicated that they concur with the entirety of a similar kol koreh released in August of 2015. It was led by Agudas Yisroel Dayan Shmuel Fuerst and signed by over 100 charedi Rabbis which directs mandated reporters and every individual to report all reasonable suspicions of child abuse and neglect promptly to the civil authorities with no requirement to obtain prior approval from rabbis. Senior charedi halachic authority, Rabbi Dovid Cohen endorsed the 2015 kol koreh and explained on the Headlines radio program (September 2015)  that one is obligated by Torah law to report abuse allegations “directly” to the civil authorities and prior Rabbinic authorization is unnecessary.

This proclamation is another indication that the Orthodox community is moving closer in the direction of supporting victims and their families, rather than siding with abusers. A fundamental problem in Orthodox communities is the harassment and ostracizing of victims and their families who report abuse, serving as an additional trauma to the abuse itself. This proclamation stresses, “Regardless of the standing of the abuser, accusers and their family members must be treated in an accepting, nonjudgmental manner so that they feel safe and can therefore speak frankly and fully.  This is necessary for them to receive suitable therapeutic support, and in order to facilitate proper investigation and pursuit of justice. Shunning or encouraging social ostracism of victims, their families, or reporters is strictly forbidden.”

The proclamation outlines policies which all Lubavitch institutions, including schools and synagogues, should adopt immediately, including educating staff in identifying, responding, and reporting sexual abuse, and teaching body safety to students. One of the essential policies is quite progressive for the charedi world, insisting thatmembers of communities must be made aware when a sex offender moves in to a community.

Some activists are wary, concerned that past affirmations to implement safety policies have not yet yielded tangible results. In August of 2016, over 300 Orthodox Rabbis of the OU, RCA and YU issued child safety policies guidelines including urging all schools and synagogues to perform mandatory criminal background checks on all prospective employees. Elliot Pasik is an attorney and co-founder and president of Jewish Board of Advocates for Children. He made a Freedom of Information Law request as recent as June 2017 upon the New York State Education Department, which manages the optional fingerprint program for the non-public schools and was disappointed with the results. Out of about 400 private Jewish schools in New York, only two fingerprint prospective employees – North Shore Hebrew Academy in Great Neck, and Shema Kolainu in Brooklyn.

Dr. Shira Berkovitz, who founded Sacred Spaces, commends this proclamation but hopes for this to spur definite change.  “May the words of this proclamation, and their [the Rabbinic signers] public commitment, guide their actions when dealing with issues of abuse and boundary violations.”

Dr. Michael Salamon emphasizes implementation, stating, “The more we acknowledge this issue, the more we implement these guidelines, the sooner we will gain control over this scourge.”

This project has been coordinated by Dovid Nyer, Licensed clinical social worker and activist. He praises the efforts of Rabbis progressing in regards to issues of abuse but warns sentiments are not enough, expressing, “according to the Teshuva process, regret of past misdeeds is essential but we must remember it is only one step. Now our community leaders must take the actions they have agreed upon and their expressed words must translate into concrete actions in order to make our communities safer.”

This proclamation, as well as the Kol Koreh regarding child sexual abuse in the charedi community that was led by Agudath Israel of Chicago Rabbi Shmuel Fuerst and signed by over 100 charedi Rabbis in August 2015, and the 300 Modern Orthodox Rabbis proclamation of 2016 were organized by activist David Nyer, LCSW of Highland Park, NJ. If you have any questions or comments, please email Mr. Nyer at djn415@aol.com.

Given the existence of child sexual abuse and other forms of child abuse which occurs in some of our communities, resulting in a number of tragic suicides as well as other physical, emotional, psychological, and spiritual consequences; and

Given the occurrence of various forms of adult abuse, including but not limited to domestic abuse, elder abuse, and abuse of the disabled; and

As religious leaders responsible for our communities’ institutions and their policies, as well as for the physical and spiritual welfare of the members of our communities

We proclaim the following:

In regards to the issue of child sexual abuse, we call upon all synagogues and schools to adopt policies geared towards prevention, including but not limited to:

o Setting up a committee within each institution to oversee policy development and implementation. Members should include school or synagogue professionals, lay leaders, and experts in dealing with abuse.

o Maximizing visibility and physical access to every space in the building in order to prevent any one adult from being secluded with one or more children without the reasonable and immediate possibility of being seen.

o Having a secure policy for dropping off and picking up children at the school or synagogue.

o Educating current and incoming staff about how to identify, respond to, and report child sexual abuse. Similar sessions should be held for the community at large. Retraining should be conducted periodically.

o Raising awareness in the community of the existence, significance, and preventative policies regarding child sexual abuse.

o Members of the community must be made aware when a sex offender moves in to a community. Community members and leaders should monitor the person’s compliance with specially instituted safeguards that may be imposed.

o Remaining alert regarding adults who seem overly interested in interacting with children.

o Teaching children in age-appropriate ways about sexual development and sexual safety, about what constitutes of improper adult behavior, about being assertive in the face of such behavior, and about the need to tell a trusted adult if another adult tells them to keep a secret.  In this way, children can become aware of, and alert to, dangers they many encounter even though no child is responsible for preventing sexual abuse; that is a responsibility of every adult and the entire community.

Ultimately, it is the halachic and moral obligation of the entire Jewish community, individually and collectively, to do all in our power to safeguard both children and adults by preventing abuse and responding appropriately once instances of abuse have occurred. 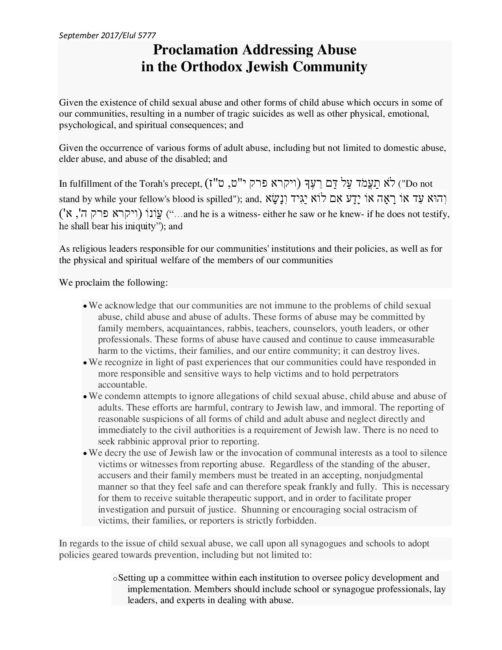 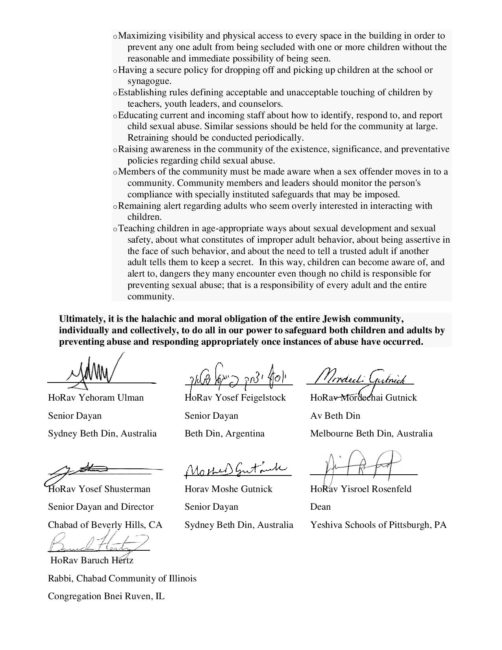 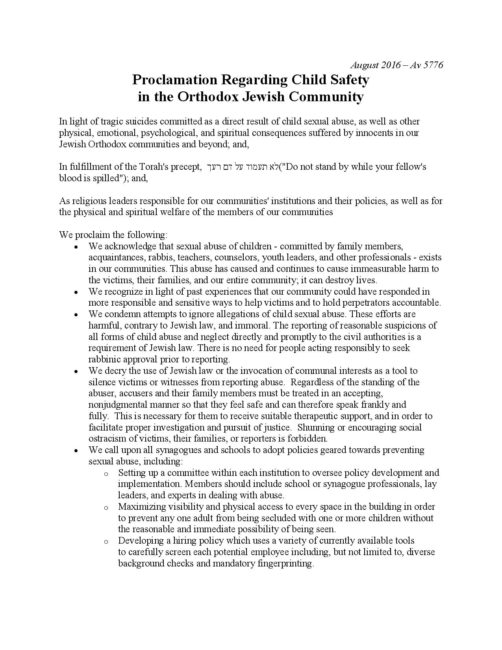 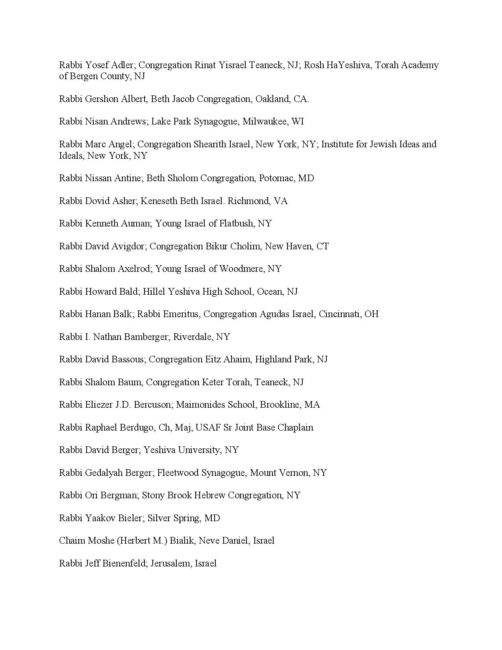 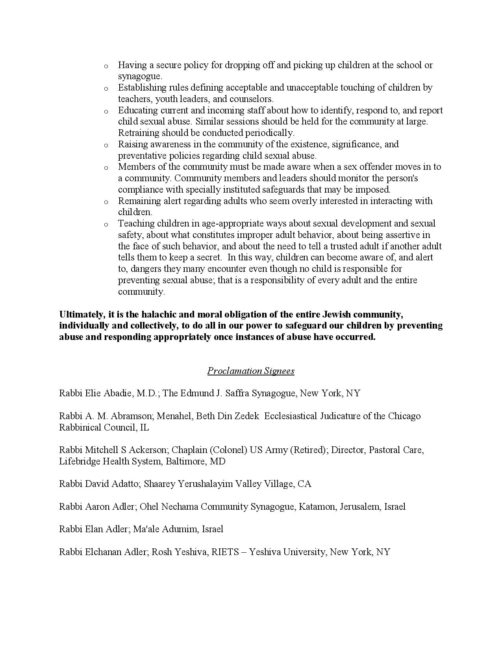 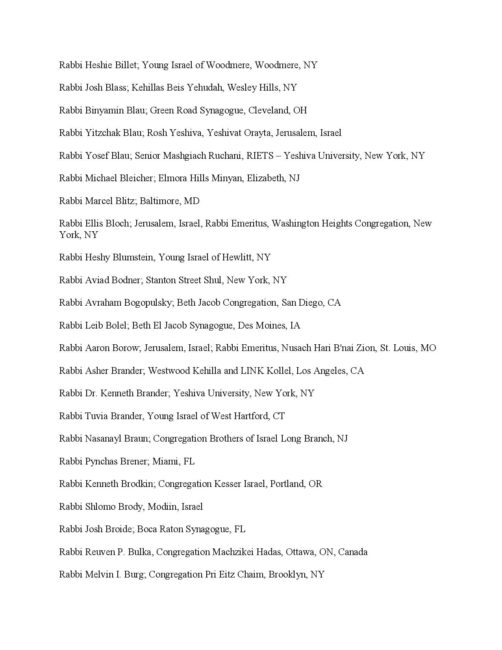 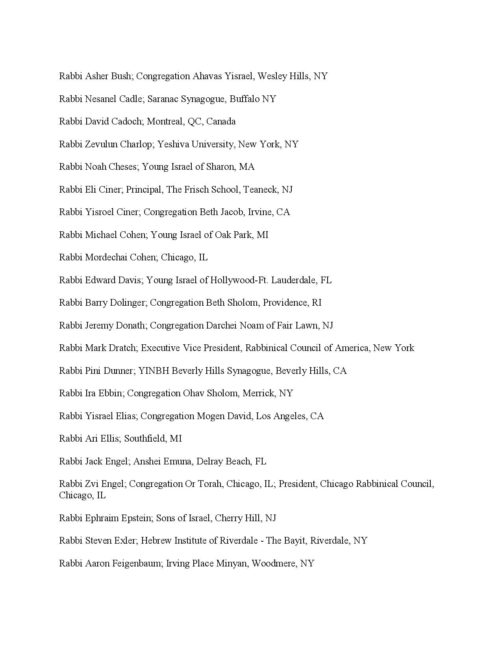 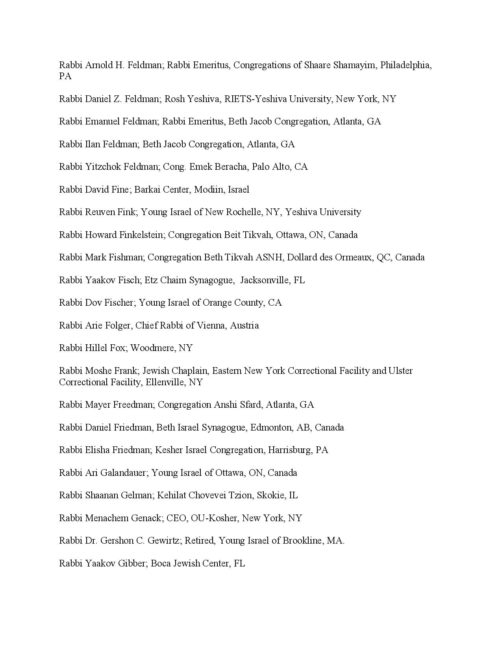 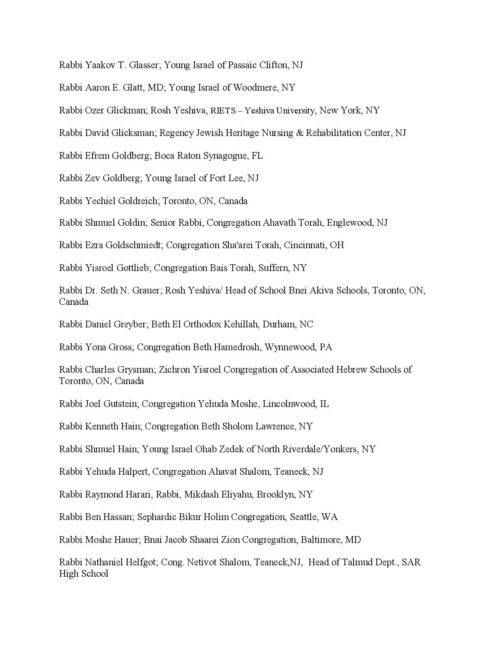 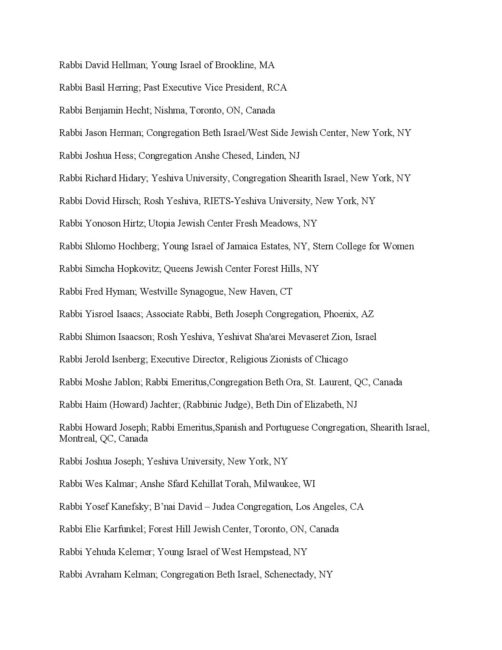 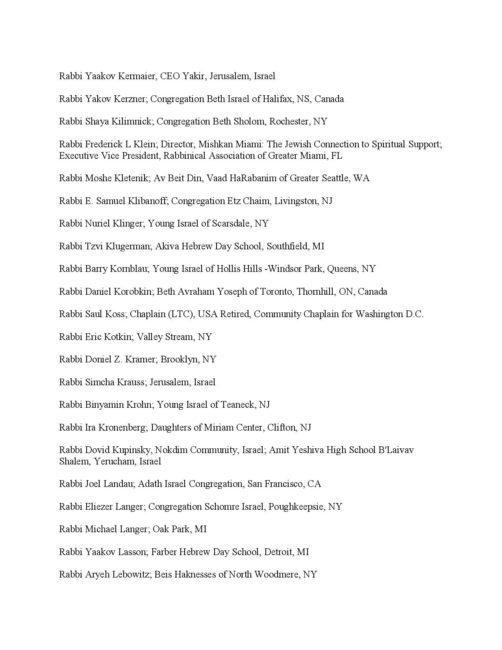 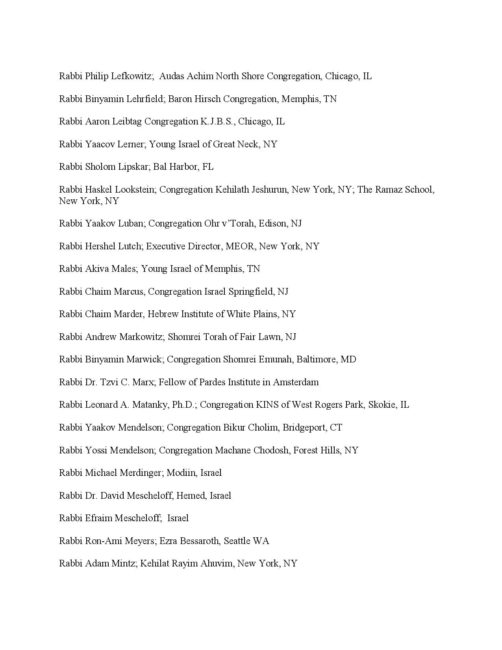 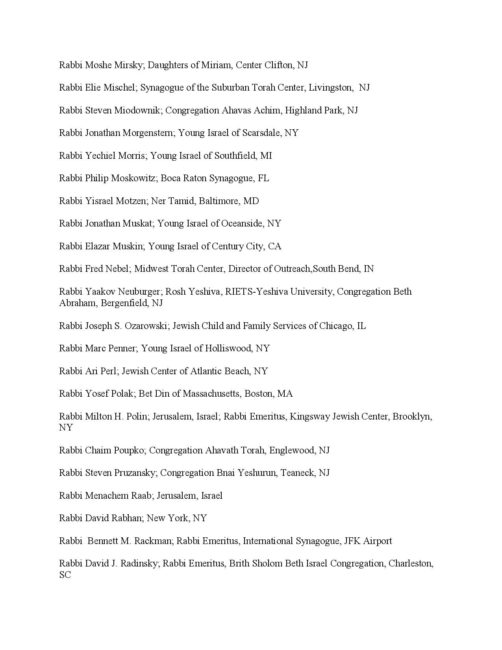 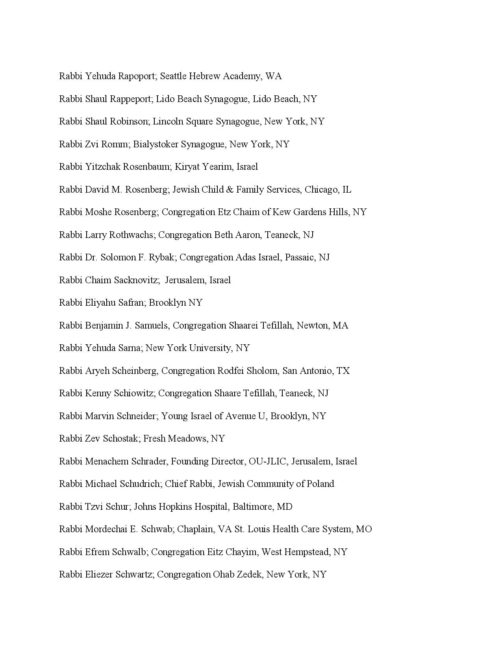 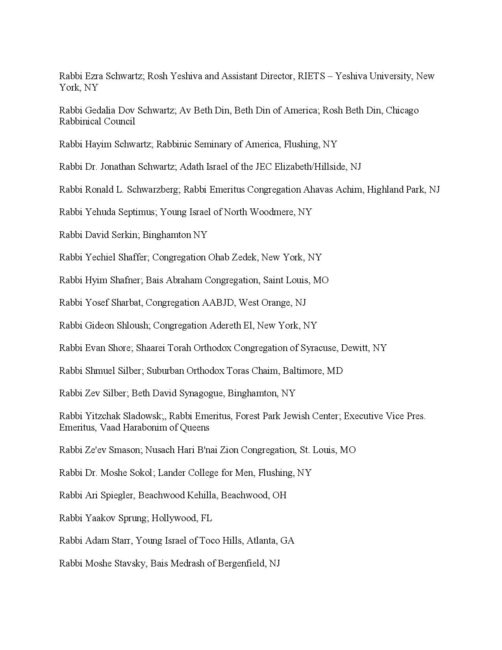 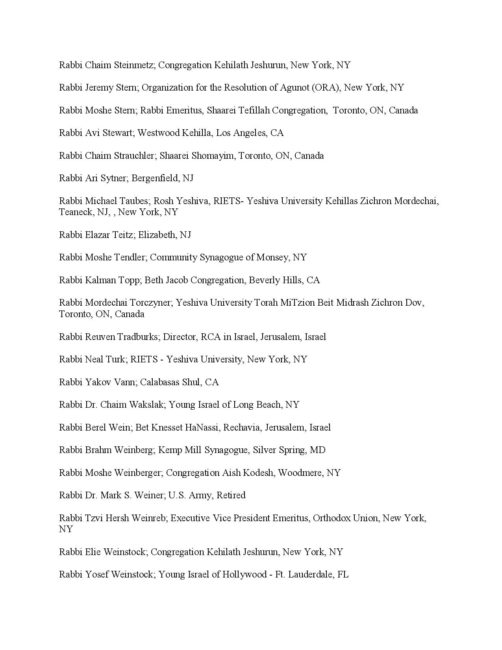 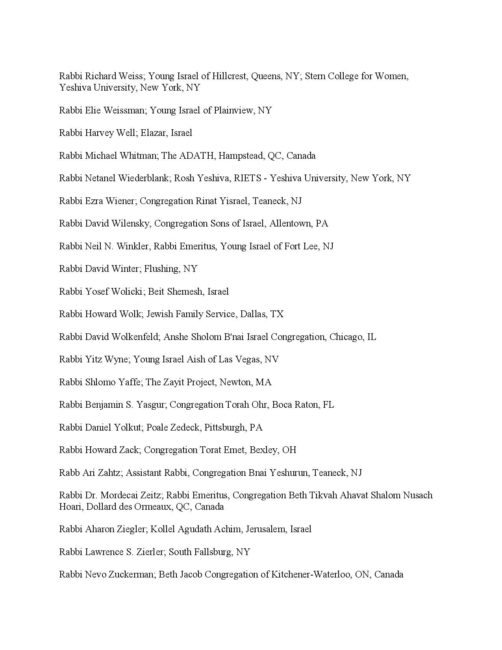 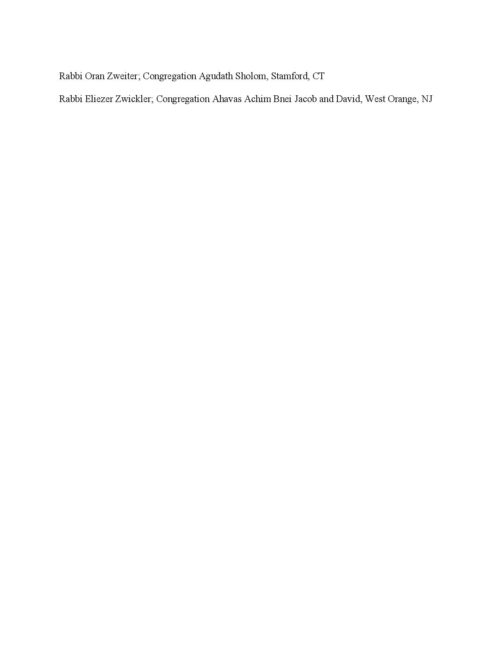