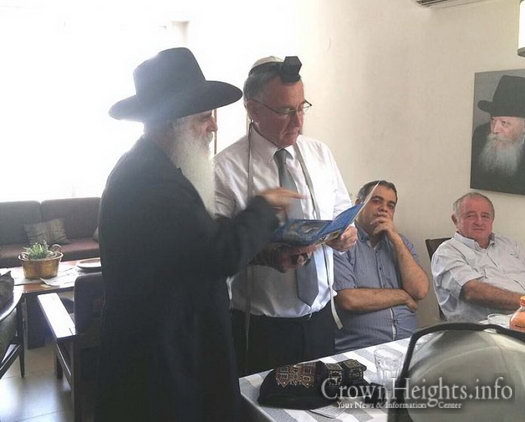 “A happy ending to the sad affair in Herzliya,” Menachem Cohen, Editor of the weekly Kfar Chabad tweeted on Monday.

The sad affair took place a week ago, when Chabdnik Yosef Amitai set up shop on Sokolov Street in Herzliya and started offering Jewish men passing by an opportunity to put on tefillin. This common scene around the globe, inaugurated by the late Lubavitcher Rebbe Rabbi Menachem Mendel Schneerson on the first Jewish month of Elul after the 1967 Six Day War, offended an inspector of the Herzliya municipality, who demanded that Amitai immediately remove his stall and stop the tefillin thing.

In the summons he issued the perplexed Amitai, the inspector wrote: “He was asked a few times to clear the table with the tefillin, but he refused to fold up.” The inspector added that Amitai “harasses bystanders by asking them to put on tefillin,” and set a fine to the amount of 730 shekel ($207.37), and ordered a police patrol car to assist with the removal of the stall.

Chabad Israel officials issued a statement saying “it is hard to believe that of all the places on earth where Chabad emissaries ask Jews to put on tefillin and connect to the tradition of their forefathers, in the State of the Jews this would entail a summons or an indictment. Not in New York, not at Red Square, not in London and not at the foot of the Eiffel Tower. Only in Herzliya, a city in Israel.”

But, according to Menachem Cohen’s tweet, the mayor of Herzliya “came to the office of Chabad emissary Rabbi Reli Halperin, put on phylacteries and announced the cancellation of the outrageous summons. The two parted with a hug.”

But then the Mayor of Herzliya, Moshe Fadlon, did one better: he offered a letter of apology to the Lubavitcher Rebbe, which may be the thing to do within some Chassidic circles, but would certainly struck many Jews and gentiles alike as justa bit odd, seeing as the Lubavitcher Rebbe has been taken from us 23 year ago.

“I, Moshe Ben Tony Fadlon, the mayor of Herzliya, inform the holy Rebbe, King Messiah, that unfortunately there was a misunderstanding about the tefillin stand, I expresses my sorrow and announce that I cherish the activities of Chabad under the reign of His Holiness, and welcomes the continuation of Chabad activities throughout the city as yet, and request from His Holiness a blessing for success and for a good and sweet year. Signed with humility, Moshe son of Tony Fadlon,” the Mayor wrote.

The mayor and local Chabadniks went out to dance in the streets of Herzliya, which did a lot to alleviate the tension. We are told that city inspectors opted not to fine them for the dancing.