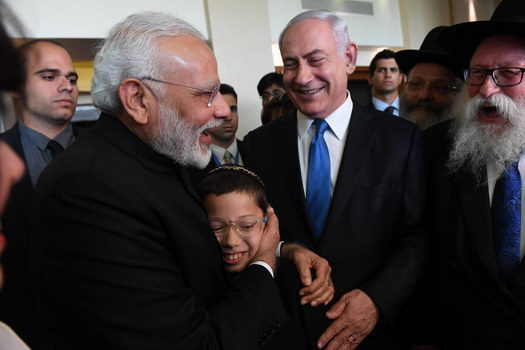 Fulfilling a promise made by the Indian Prime Minister during a recent visit to Israel, Moshe Holtzberg, the son of Chabad emissaries to Mumbai Rabbi Gavriel and Rivka Holtzberg, HYD, received an entry visa to India.

During his visit to Israel, Modi met with Israeli Prime Minister Binyamin Netanyahu, Moshe, his nanny Sandra, and all four of Moshe’s grandparents.

Both Gavriel (Gabi) and Rivka were murdered in 2008 when Muslim terrorists entered their Chabad House and slaughtered them. Moshe’s life was saved by his nanny, Sandra, who managed to escape the area holding him in her arms.

According Moshe’s grandfather, Rabbi Shimon Rosenberg, Moshe plans to take his parents’ place as the Chabad emissary to India when he gets older.

“He was born there, and for him, that’s his home,” Rosenberg explained. “He wants to hold his bar mitzva in India, and go on a tour of the area to find his roots. Obviously, he will also visit the grave of the Lubavitcher Rebbe at the same time.”

“Moshe told me yesterday that the Indian Prime Minister said that when he’s eighteen, he can go back to India and be a Chabad emissary and the country’s Chief Rabbi.”