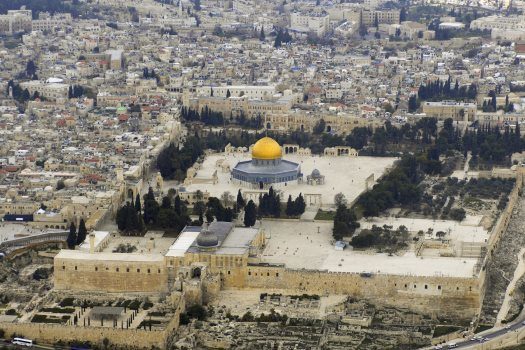 Crown Heights Women for the Safety and Integrity of Israel, an advocacy group, protested a decision by the Israeli Government to remove security measures from the Temple Mount, such as metal detectors, which were recently installed in the aftermath of a terror attack that left an Israeli policeman dead.

A statement released by the group reads as follows:

The world is well aware of the series of terror attacks Palestinians have waged against Israelis over the past two weeks. Beginning July 14th, terrorists murdered two Israeli Border Police officers on guard near the Temple Mount using weapons taken from a storage cache found in Temple Mount Waqf offices specifically designated for violence against Israelis.

In response, Israel installed metal detectors and security cameras. Arabs reacted with riots and an increase in attempted terror attacks elsewhere in Israel.

Before the weekend was out, an Israeli security officer working at the embassy in Jordan was attacked on Sunday, July 23rd but managed to survive by killing the

terrorist. Jordan insisted his diplomatic immunity be waived in order to interrogate him or else threatened to prevent his return to Israel.

At the same time Jordan demanded Israel remove the metal detectors installed on the Temple Mount while Jordanians rioted outside the embassy with chants of Death to Israel.

Although we join in expressing relief at the safe return of the officer, we strongly protest Israel’s capitulation to Jordan’s demands and US pressure to concede on its security.

The power to stop this travesty lies in the hands of Prime Minister Netanyahu, the Israeli Cabinet and Knesset Members.

It is time for them to heed the Lubavitcher Rebbe’s counsel and make the security of Israel’s Jewish electorate the top priority.

Crown Heights Women For The Safety And Integrity Of Israel calls on the Israeli Government to:

Needless to say full Israeli jurisdiction must also apply to the Temple Mount and East Jerusalem and include the immediate re-installation of metal detectors and security cameras.

As to the belief that “smart” technology alone may be more effective against terrorism, we are reminded of the Lubavitcher Rebbe’s position that strategic as well as tactical depth and total jurisdiction on the ground are what ultimately stop enemy aggression and determine a country’s security.

Furthermore, we recall the Lubavitcher Rebbe’s advice well before the advent of the Yom Kippur War that Israel must not rely on the Bar Lev Line but rather concentrate its forces in one strong line of defense to keep out the enemy. Today Israel must make a clear and forceful demarcation between itself and these agents of war and terror and be ready to repulse any type of provocation.

2. WITH the restoration of Law and Order those Arabs who live in Areas A and B should be offered the choice to either become loyal Israeli citizens or be given assistance to emigrate as former MK and Zehut party leader Moshe Feiglin has outlined.

3. AS PER the Rebbe’s counsel, building and expanding Jewish communities will always be the best deterrent to enemy aggression and outside pressure and demonstrates our belief in our right to live in and settle the entire Land of Israel.

Finally, we wish to remind President Trump that it is Palestinian Authority leader Mahmoud Abbas who openly incites Arabs to violence against Jews. Simultaneously Abbas empowers the Fatah military wing, that includes the barbaric Martyr Abdul-Qader al-Husseini and the Al-Aqsa Martyrs’ Brigades, to carry out terror attacks against Israeli soldiers and civilians.

Since initiating the Knife Intifada during the Jewish Holiday of Sukkot in 2015 more than a thousand Israelis have either been murdered or wounded, r”l.

We, therefore, ask that you wisely support Israel’s sovereign right to protect its citizens from harm. Doing so will bring true peace to the region and blessings of success to your presidency.

Crown Heights Women for the Safety and Integrity of   Israel