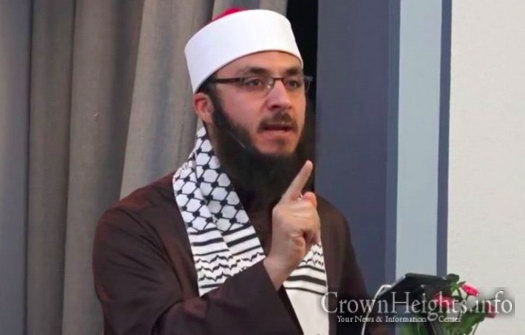 From the Algemeiner by Rachel Frommer:

The director of the Chabad center serving the University of California-Davis told The Algemeiner on Tuesday that he was “taking seriously” a Friday sermon made by the imam of the local mosque that some have called antisemitic.

Rabbi Shmary Brownstein said the comments from Ammar Shahin of the Islamic Center of Davis — which sits blocks away from Chabad of Davis — had “unacceptably advocated and incited hatred and violence against Jews” by praying that god would “liberate the Al-Aqsa Mosque from the filth of the Jews.”

In his sermon, translated by the Middle East Research Institute TV Monitor Project, Shahin continued, “Oh Allah, destroy those who closed the Al-Aqsa Mosque. Oh Allah, show us the black day that You inflict upon them, and the wonders of Your ability. Oh Allah, count them one by one and annihilate them down to the very last one. Do not spare any of them.”

Brownstein said, “I don’t know if this is typical of what’s said at the mosque, but there is too much acceptance of this kind of talk. Either people aren’t aware or they think it’s not that big a deal.”

“As Jews, we are sensitive to this sort of rhetoric because we know what’s come of such talk in past times,” said Brownstein, who added that he had contacted the authorities and would be considering increased security measures.

Brownstein noted that Shahin’s is the only mosque in the town of Davis and that, during the academic year, the center has substantial student attendance.

Shahin and the mosque’s executive board reportedly said in a written statement released Tuesday, “It was clear to all who listened to the entire sermon that Imam Shahin was not calling towards anti-Semitism nor towards violence against any religion. Rather, he is known for his stance against extremism and his condemnation of un-Islamic groups which promote such views.”

Also Friday, the imam at the Islamic Academy of Riverside, located near that city’s UC campus, made a speech calling for “jihad in our lives, no matter what and where we are and what is happening.”

Mahmoud Harmoush commended those who “resist and fight back as much as you can” against the Israeli security forces installed over the weekend on the Temple Mount.

“Dear brothers and sisters, the conflict is not only in Palestine. They are going there, and they will be demanding that next….I promise you, it is not only Palestine. If you are going to be like that, most of the Middle East, and even, as I said, Mecca and Medina,” said Harmoush, who has taught Arabic at California State University-San Bernardino.

The Islamic Academy of Riverside was attended by one of the perpetrators of the 2015 San Bernardino terrorist attack in which 14 people were killed.