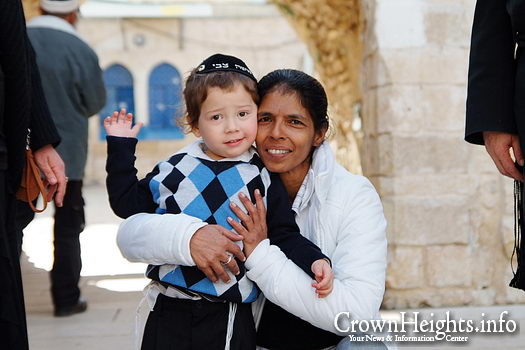 Moshe with his nanny, Sandra Samuel, in Israel.

During a state visit to Israel, Indian Prime Minister Narendra Modi will meet with Moshe, the son of Rabbi Gavriel and Rivkah Holtzberg, HYD, who was rescued by his nanny while his parents and several of their guests were murdered inside their Mumbai Chabad House by Pakistani terrorists in 2008.

from the Hindustan Times:

The hyphenation of Israel and India in the war on terror and religious extremism is set to be reiterated before the world when Prime Minister Narendra Modi meets 26/11 Mumbai massacre survivor Moshe Holtzberg on July 5 in Jerusalem.

Moshe was only two when he was rescued by his Indian nanny Sandra Samuel from two terrorists of the Pakistan-based Lashkar-e-Tayyeba (LeT). The terrorists had killed Moshe’s father Rabbi Gavriel and mother Rivkah — five months pregnant at the time— along with six others at Nariman Chabad House in Colaba in the Mumbai terror attacks.

Samuel is in touch with 11-year-old Moshe and was granted permanent resident status and honorary Israeli citizenship in 2010.

Israeli sources told Hindustan Times that the meeting should take place on July 5, but the time has not been fixed yet as Moshe lives with his maternal grandparents in Afula, 90km north of Tel Aviv. Moshe wants to be a rabbi and work in Mumbai, his grandfather Rabbi Shimon Rosenberg has said, and it is likely PM Modi will offer him all help in realising that ambition. “We are still working out the details and logistics of the meeting,” said a senior official on condition of anonymity.

Click here to continue reading at the Hindustan Times.