« Jewish Man Attacked with Ax in Dnepropetrovsk
Video: A Home Away from Home in Muslim Turkey » 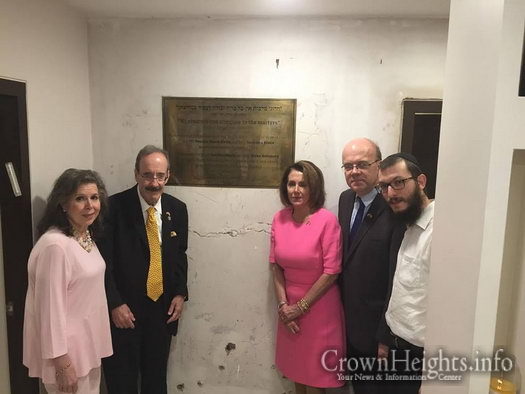 Leading members of U.S. Congress paid a visit on May 11 to the Chabad House in Mumbai, India. House Democratic leader Nancy Pelosi, New York Rep. Eliot L. Engel and Massachusetts Congressman Jim McGovern were there as part of a bipartisan delegation touring parts of the country.

The stop at the Chabad center, known as the Nariman House, the site of the 2008 terrorist attack in Mumbai. Rabbi Gabi and Rivky Holtzberg, Chabad’s representatives then, were among those killed in the attacks.

Posting on Facebook, McGovern wrote: “Today we joined Rabbi Kozlovsky at Nariman House [a name for the Chabad House] as we honor those lost in 2008 #Mumbai attacks. America must always stand up to hate.”

“Thank you Rabbi Kozlovsky for welcoming us to Nariman House as we honored the memories of those who perished in 2008 Mumbai attacks,” posted Pelosi on twitter.

Rabbi Yisroel and Chaya Kozlovsky arrived in India in 2012 to direct Chabad-Lubavitch of Mumbai, and oversaw the rehabilitation and rededication of the Nariman House. They have run all of the city’s Chabad activities since then.

Among the many issues addressed was the need for increased tolerance.

« Jewish Man Attacked with Ax in Dnepropetrovsk
Video: A Home Away from Home in Muslim Turkey »