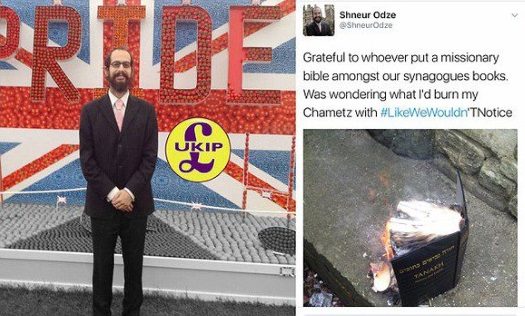 Shneur Odze, a 33-year-old Lubavitcher who is running as the United Kingdom Independence Party (UKIP) candidate for mayor of Manchester, ignited a firestorm by burning a bible that was left at his door by missionaries, and then publicizing the photo on social media.

from the Times of Israel:

A high-profile rabbi and aspiring politician stirred up controversy in British media when he burned a Bible on the eve of Passover.

“Grateful to whoever put a missionary bible amongst our synagogue’s books. Was wondering what I’d burn my Chametz with,” he tweeted, a reference to the leavened bread that Jews destroy on the eve of the Passover festival.

The tweet has since been deleted, but Britain’s Daily Mail reported on the incident on Sunday.

Back in 2014, Odze sparked controversy by refusing to shake women’s hands amid a run for the European Parliament on the UKIP ticket, which led many in the party to call for his ouster.