« Picture of the Day: Taller than Tall
Proposed Law Would Have City Shovel Sidewalk if Property Owner Doesn’t » 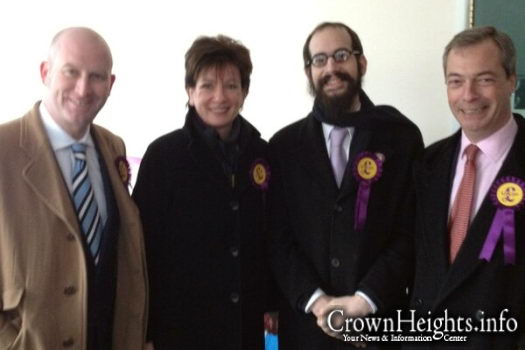 A nasty row has broken out within the UKIP (United Kingdom Independence Party) over an EP (European Parliament) candidate’s refusal to shake women’s hands due to his religious beliefs.

Shneur Zalman Odze, a prospective MEP for the North West of England, has told party members his Orthodox Judaism forbids him from physical contact with women other than his wife.

Some party activists say they are offended by his stance, which threatens to alienate half the electorate.

But senior officials have rebuked these activists as “rude” and “wrong” for refusing to respect Odze’s beliefs.

Fred McGlade, a UKIP regional organizer, has already resigned from his post in protest at the decision to include Odze, 31, on the party’s list of top MEP candidates.

He warned UKIP chairman Steve Crowther that he would stand down if Odze was chosen by the party, because of his attitude towards women.

At least one UKIP branch has banned Odze because of what a member described as his “difficult and aggressive behavior.”

Crowther told the Times it was “rude” of McGlade and others to complain about Odze.

He said: “We have a policy of tolerance for and acceptance of people’s own religious observance. We do not consider it grounds for complaint. It harms no one.”

Ozde, who is fourth on the Ukip’s MEP list in the North West, was unavailable to comment.

« Picture of the Day: Taller than Tall
Proposed Law Would Have City Shovel Sidewalk if Property Owner Doesn’t »