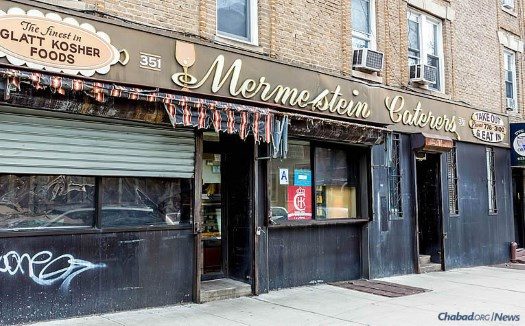 A stroll down Kingston Avenue in the Crown Heights neighborhood of Brooklyn, N.Y., reveals rows of eclectic shops, including Judaica bookstores, Chassidic art galleries and modern kosher eateries. Seemingly overlooked by time, Mermelstein Caterers—still sporting a vintage marquee from the early 1950s—sits nestled between a trendy eyeglass store and an alley.

One of the last true kosher luncheonettes, the store continues to serve steaming plates of traditional goulash, potato knishes and latkes year-round. Over time it has fed not only New Yorkers and its masses of tourists, but influential public servants as well.

Communities all over the world will gather on or before Friday, April 7, of this year (corresponding to the 11th day of the Hebrew month of Nissan on the Jewish calendar) in honor of the 115th anniversary of birth of the Rebbe—Rabbi Menachem M. Schneerson, of righteous memory. (Ancient Jewish teachings reveal that a person’s years progress even after his passing, marking the soul’s ascent. This is particularly true regarding a righteous person.)

And when they do, they can be reminded of an instance when kosher food from 250 miles away enhanced Washington’s celebration of the Rebbe’s birthday.

In March of 1983, in an article titled “In Honoring the Rebbe, a Caterer Did Well, Too,” Francis X. Clines—a White House correspondent for The New York Times during the Reagan administration and now a member of its editorial board—offered a lighthearted look into how official Washington celebrated the Rebbe’s 81st birthday, as well as the personality of the Brooklyn-based caterer who helped officials make it happen:

“The White House Office of Public Liaison, recently purged for its alleged failure to keep the President in favor with such specialized constituencies as women, racial minorities and religious groups, did something right today. So did Mermelstein the caterer from Brooklyn.

The public liaison office arranged to have President Reagan gently honor the 81st birthday of Rabbi Menachem Mendel Schneerson, the Lubavitcher Rebbe, as he is known.”

The article tells of a bemused White House assistant who was clearly proud of his knowledge that the Rebbe rarely left Brooklyn:

“Michael Gale, the President’s deputy special assistant for American Jewish relations, made sure that Mr. Reagan did not call upon Rabbi Schneerson to step forward. The truly respectful know that the Rebbe never leaves his world headquarters on Eastern Parkway in Brooklyn, even to visit the White House. Reagan aides were relishing a tale that, in a previous Administration, a Presidential aide made the mistake of urgently summoning the Rebbe from a gathering of visiting Lubavitcher rabbis.”

Clines describes how the owner of Mermelstein Caterers, unaccustomed to such grand events, nevertheless trucked poached salmon, potato knishes and other kosher delicacies from his Brooklyn storefront to 300 people gathered on Capitol Hill:

“‘I’m nervous for two days,’ said Eddie Mermelstein, hovering about his food as it was set out in Senate caucus room 1202 of the Dirksen Senate Office Building, far from his kitchens on Kingston Avenue. ‘There’s nothing kosher in the Capitol, so we have to do it this way. But it’s an honor to serve the Rebbe’s guests.’ ”

In an effort to capture the atmosphere in the caucus room, Clines mentions Reagan’s recent Middle East policies, saying they had

“stirred criticism among some American Jews and Israelis, two communities that tend to view the Rebbe with attentiveness and reverence.”

“As he spoke, various senators arrived for the Lubavitcher luncheon to pay their respects to the happy gathering of bearded, dark-suited men talking in the caucus room. The politicians signed the birthday scroll and posed for photos that showed them signing, just as Mr. Reagan took care to do later in the day.”

And just like the senators, Clines, too, comes back to the delectable food from Brooklyn:

“Their usual patter, the ‘nice-to-see-you’ stuff of politics, was interrupted by healthy mouthings of Mermelstein’s catering.”