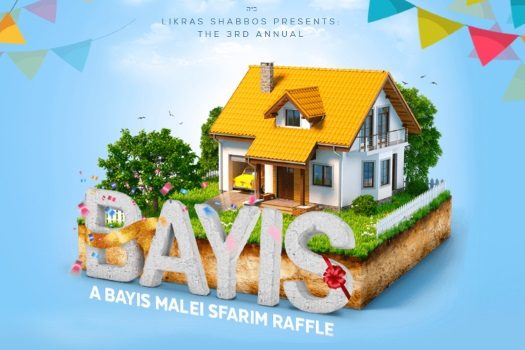 The drawing of the 3rd Annual Likras Shabbos Bayis Raffle was held on Sunday night in New York. The lucky winner of the equivalent of six months of their rent or mortgage was announced, along with the second place winner of 100 Sifrei Chassidus.

Over the past few weeks, thousands of tickets were bought in support of the extraordinary work of Machon Or Hachassidus. Congratulations to all who participated in support this vital work!

Machon Or Hachassidus was founded thirteen years ago with the goal of making the Rebbe’s teachings accessible and available to the broader Jewish community. Today, tens of thousands of people from all segments of the Jewish community discover the Rebbe’s teachings through specially prepared publications in print and email that are distributed in over 3,000 shuls in America and Israel, and emailed to over 30,000 subscribers.

The flagship project of Machon Or Hachassidus is the weekly Likras Shabbos, which has grown from 1,000 copies printed a week in 5764, to 15,000 printed each week in 5777. It is well received by Rabbonim, Roshei Yeshivos, Baalei Batim and Bochurim from across the spectrum of the Jewish community. Another monumental project are the Daily Lightpoints and Penina Yomis emails, short Divrei Torah in Hebrew and English that are emailed to thousands of subscribers.

The lucky winner of the First Prize is Levi and Hindy Levinson from Brooklyn, NY, who will receive the equivalent of six months of their rent or mortgage. The Second Prize winner of 100 volumes of Sifrei Chassidus of their choice at Kehos is Kevin Lipstein from Teaneck, NJ.

The combined prizes of payments for the home and sifrei chassidus symbolizes and serves as a reminder of the Rebbe’s mivtza of Bayis Molei Seforim, that every Jewish home should be filled with Torah literature.