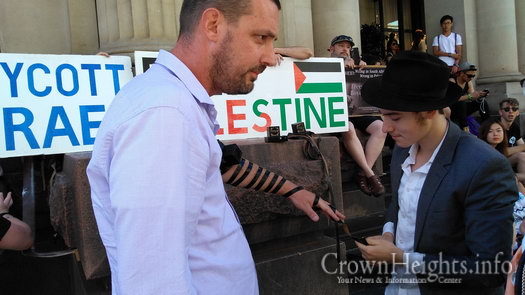 Michael, a Jewish Melbourne man who was recently photographed putting on Tefilin with two Lubavitcher boys in front of an anti-Israel protest in the city center, which was featured as CrownHeights.info’s Picture of the Day, has reached out to the Yeshiva Gedolah (YG) to express his feelings about the incident.

In an e-mail to the Yeshiva administration, Michael wrote:

When I see the young religious Jewish guys on Fridays in the city, I usually throw a “Shabbat Shalom” their way. They then always ask me to put on Tephiln and say a prayer. My usual response is “sorry fellas, in a rush” (my bad).

Today, after a discussion about Israel turned into an anti-Semitic rant from the old dude who’s never been to Israel (with the sign ‘boycott Israel’), I couldn’t help but tell the religious guys, “sure, I’ll whack on the boxes and chains, no probs”.

I said the Shema and prayed for peace on Earth. Hatred has no place in our society and no matter what your beliefs, wouldn’t it be a better world if we all promoted peace and love?

Those 2 boys are very special boys. My wife who is new to Australia from Israel was very upset seeing that sign in her new home, Melbourne. The boys so gently calmed her and made her feel much better. My wife lost friends in Israel who were very young due to Palestinian terror and her very brave brother has 200 pieces of shrapnel still in his body from the 2006 war in Lebanon. So for her to hear these old men ranting on about firstly israel, then Jews, it was upsetting for her. I thought there would be no better way than to put on the Tefilin and pray for peace. After the prayers, I then instructed the 2 boys and my wife to walk away with me after the prayer, and not look back at the old ignorant men. The sequence of that, made us all feel so proud to be Jewish, zionists and peace lovers. I have to admit though that it was 15 years since I put on Tefilin. I have always loved israel, and when I went to live there for 3 years I fell in love with israel even more. The irony of that Fridayafternoon is that 2 of the old men who were yelling at us have never been to Israel. Typical.
Kind regards
Michael

50 years ago, a few days before the Six Day War in June 1967, The Lubavitcher Rebbe, Rabbi Menachem Mendel Schneerson, launched a world-wide Tefillin Campaign. To commemorate this historic event, Yeshivah Gedolah students have renewed their efforts and launched a special campaign with a target to encourage 7,770 people to put on Tefillin before the Rebbe’s birthday on 11th Nissan. Nearly 5,000 people around Australia have already put on Tefillin. 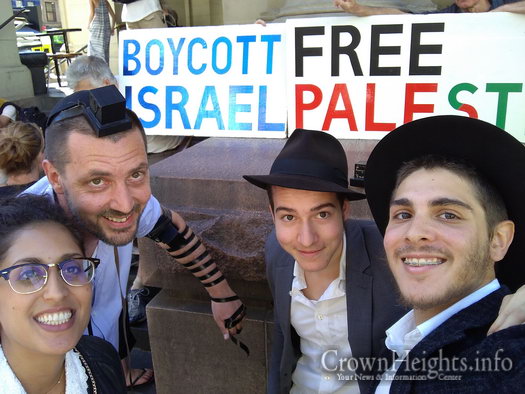