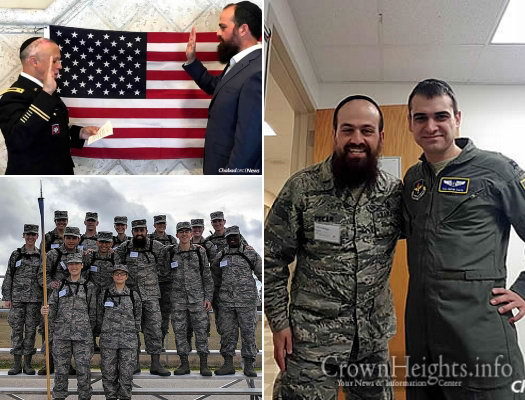 Discussing his work with gusto in this Q&A with Chabad.org reporter Carin M. Smilk, Rabbi Levy Pekar sounds like any other young professional starting a career in full force. Pekar, 29, is training to be a U.S. Air Force chaplain, beginning what will be nearly six months of back-to-back training programs. He’s also a bearded rabbi—one of just a handful serving the U.S. armed forces—and counseling and supporting airmen, and their families, will be his mission.

Pekar was born into a Chabad-Lubavitch family in Monsey, N.Y., and grew up in Beitar Illit, Israel. He attended the Chabad yeshivah in Brunoy, France, and received his rabbinic ordination in Jerusalem. Currently, he is working on a master’s degree in mental-health counseling from Indiana University of Pennsylvania (IUP) outside of Pittsburgh.

He is stationed at Nellis Air Force Base in Nevada with a rank of first lieutenant. But for the past few weeks, he has been training at Maxwell Air Force Base in Montgomery, Ala. He’ll get a break, and then return for another six weeks of training from April through June.

Q: Let’s get right to the basic question: Why the military?

A: I have three life goals: to share Judaism, to be a mental-health counselor and to effect positive change in the world. The military provides an opportunity to do all three.

I grew up in a small village in Israel, spending most of my time in a rugged, outdoor environment. Then I went to yeshivah in Brunoy, France, known for its rigorous course of study, and the instillment of a positive Jewish vision and values.

The military was a natural interest and fit; it was in line with my life goals, and my personal and educational background. It may seem like an unusual profession for most Chabad-Lubavitch rabbis, but it really spoke to me. I’ve seen and felt hashgachah pratis (Divine providence) in several instances, showing that this is the career for me.

Q: How did you first become involved with it?

A: I grew up hearing stories of legendary Jewish chaplain Jacob Goldstein, and after going to Yongson Garrison, South Korea, in October 2009 for Yom Kippur as a rabbinical student, I was intrigued and curious to know more. I have since helped out on several bases, including Fort Bragg, Fort Knox, Fort Jackson and West Point, to name a few, furthering my connection to the military and to Jewish service members.

After deciding to actively pursue this career, I contacted the Florida-based Aleph Institute, which provides social services, and religious, educational, humanitarian and advocacy needs for Jews in the military. I spoke with Director of Military Programs Rabbi Sandy Dresin and Director of Outreach Programs Rabbi Menachem Katz. They helped me start the lengthy application process and invited me to come to the annual Jewish Chaplains Shabbaton in Miami to get to know the other chaplains and their way of life.

Q: What requirements go along with the position?

A: Other than having the required education, you need to be very accepting; you work with all kinds of people from different walks of life. Being non-judgmental and empathetic are imperative in order to relate and connect to service members. And, of course, taking orders and following the chain of command are basic tenets of the military. Finally, you have to be flexible and able to move around, often with little say where and when you go. Active-duty chaplains are transferred from place to place every few years.

Q: Do you carry or are trained in using a weapon?

A: No. Chaplains are forbidden to hold weapons. We are noncombatants.

Q: As far as food goes, what do you eat on base?

A: When I first got here, I lived on kosher Meals Ready-to-Eat (MREs are standard fare for the military), fruit, and I brought some kosher beef jerky along with me. Two local families from nearby Birmingham (the Saul family and Weinbaum family) have since been providing food for me during the week and for Shabbat.

Q: How do you think airmen perceive you, a bearded Chabad rabbi on base?

A: When I first arrived, people were surprised and curious as to how I had gotten into the military with my beard. I was open about it, explaining what it means and why it is part of how I serve G‑d. That message was easily received.

I put on tefillin every day in-between classes when everybody else gets a bathroom break. We get up at 4:30, before I can don my tefillin, so it’s really the only time that works. Recently, two other Jewish men identified themselves and now put on tefillin with me daily.

A Chassid does what he needs to do regardless of where he is or who sees what he is doing. By the mere fact of just being myself, I have been able to inspire my brethren to follow my actions and be proud of their faith. A Chassid inspires by action, not by rhetoric. One of the men, in fact, now wears a yarmulke at the dining facility. What’s happening is the effect that the Lubavitcher Rebbe—Rabbi Menachem M. Schneerson—has on my small little world of COT 17-02 (Commissioned Officer Training, Class 17-02).

Another example is a Jewish woman who reached out to me. She had observed my daily tefillin ceremony since I have been here, but wanted to keep to herself. Now, she wants to join in Shabbat and asked me for Shabbat candles.

Q: Can you describe your work as a chaplain for airmen?

A: My duties involve caring for the spiritual, religious and ethical needs of airmen, and advising leadership on moral and morale issues. Those who work in the military have a mission to protect the United States of America, and that comes with a lot of personal and family stress. It also brings a great deal of existential searching and angst. The military is demanding, asking service members to push themselves and their families hard. Our work is geared to support them, and enhance their personal resiliency and family cohesiveness, as well as give them the space to explore meaning in their lives.

They can talk to us about anything, and it will not be repeated; whatever they say is completely confidential. Military members often discover faith for the first time in the service, and we as chaplains assist them in exploring their spiritual selves.

Q: What unique perspective or personality traits do you have that will help in the course of your work?

A: It’s a blend of my personal background and training as a therapist. And it evolves from my own sense of spirit, my journey to decide that this is my way of life—from a place of empathy, from chassidus. I truly love other human beings and value people for who they are.

Chabad Chassidim come to the Jewish people, wherever they are, to bring a connection to Judaism. Many Jews in the military are located in places that are simply inaccessible to other shluchim, but in my position, I’ll be able to reach out to them. For example, during Chanukah, I was able to arrange for supplies to be sent to McMurdo Station in Antarctica. There are many service people who just wouldn’t have holiday accoutrements otherwise.

On a personal note, it’s an amazing feeling to be able to serve G‑d in ways that are different, unconventional. The average person doesn’t think about military members; they are generally an invisible and largely inaccessible part of the population. They live in difficult, transient and fickle environments. Many don’t get the attention or support services they need and deserve. Everyone has so much to share, and that’s where chaplains come in.

Q: What was your first Shabbat on the training base like?

A: It was very beautiful—the atmosphere and the company. We sat for hours in the dorm, me and two other Jews, another non-Jewish chaplain who asked to participate and a few non-Jewish people who joined us for the warm conversation. The food arrived beforehand when Rabbi Elie Estrin, another Chabad chaplain training at a nearby facility, came over and gave me some of his food. I didn’t expect it; I was planning on making a meal of dry pita, grape juice and some of that beef jerky.

Two Jewish cadets from another program, TFOT (Total Force Officer Training), saw me marching past them for the past couple of weeks. After a series of broken telephone messages, they managed to make arrangements to come to my most recent Shabbat meal, another memorable evening, with five Jews and seven other guests.

Q: You mentioned an experience on your base at Chanukah time. How is that representative of what you do, and of Judaism?

A: I held a party on the first night of Chanukah, Dec. 24, with enough food and supplies for 30 to 40 people. There was a lot left over. So afterwards, I went around with another Jewish airman and my wing chaplain to different gates on the base—gates that were being guarded by 18-year-olds not with their families on the holidays. I gave them some chocolate and other food to eat, but most of all, I gave them hugs. Real hugs. Most of them hadn’t gotten one since they left home. 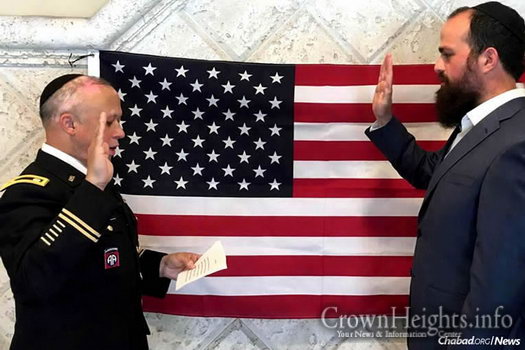 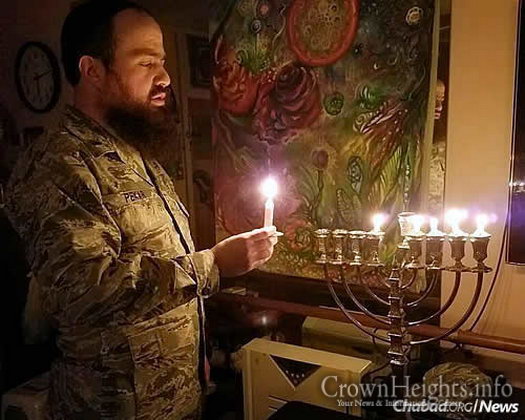 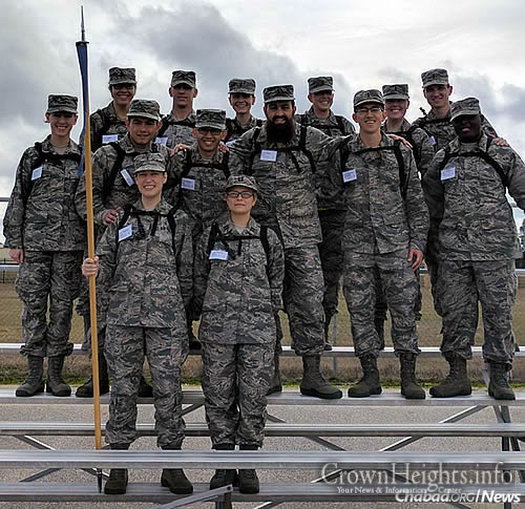 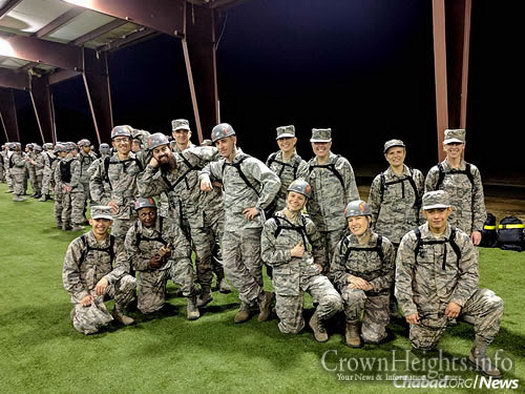 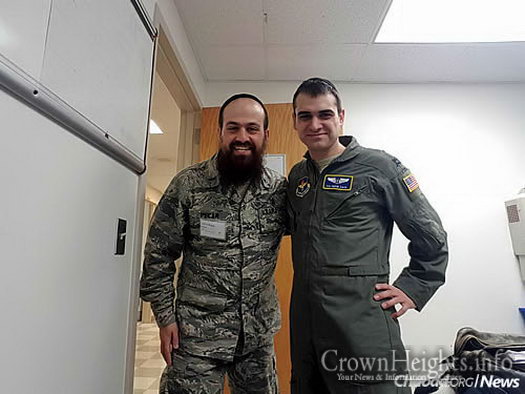 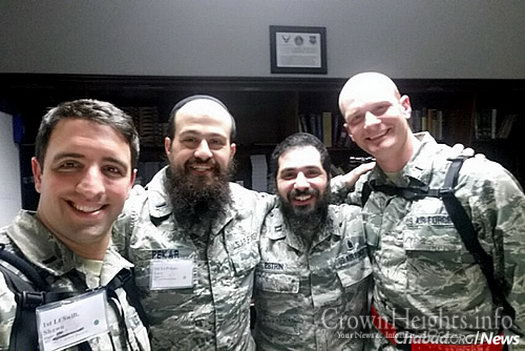 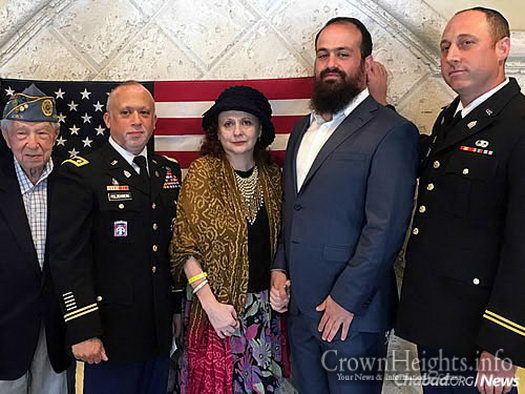